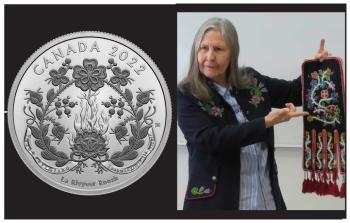 “There weren’t too many people who had seen it or remembered what our work was really like. And it was absolutely gorgeous. The colours, the designs they used, which is a combination of French embroidery patterns and, of course, what they saw in nature, and combining the two to make our Métis style pattern. — Jennine Krauchi about seeing old Métis-style beadwork in the archives at the Manitoba Museum
By Rebecca Medel
Local Journalism Initiative Reporter
Windspeaker.com

From the time Jennine Krauchi was a very young girl, she was always around beadwork. Her father sewed jackets, vests, moccasins, mukluks and other items of clothing, while her mother added beadwork designs to the garments.

“We lived really close to Sioux Valley, so I remember the women there coming into my mom and dad’s shop and doing beadwork. But it wasn’t until around ‘93, when I moved from Brandon to Winnipeg, that I really got back into my roots and got back to my culture.”

At that time Krauchi met Lorraine Freeman, founder of the Métis Resource Centre, who was looking for a Métis beader to demonstrate beading and teach classes.

“And I thought, ‘Well, I’ll give it a try’, because I knew how to do it and I was Métis. She wanted to get all of these Métis cultural things back and have a rebirth of our culture. And it started from there. At that time [in Winnipeg], you would’ve been lucky to have enough Métis beaders to sit around a kitchen table.”

This month, Krauchi’s design for a new coin for the Canadian Mint was unveiled. The reverse of the 2022 $20 fine silver coin, called Generations: The Red River Métis, has her design engraved on it, which includes elements of the Michif language.

The fire in the centre of the design speaks to a period of repression and loss, but the Prairie Rose—a classic Red River Métis motif—represents the survival and cultural resurgence of the Nation. Long stems are characteristically adorned with two or three bead accents known as "mouse tracks", while leaves and flower buds fill the pattern with a sense of love and joy.

“When I found out that I’d won the competition, it was September 9, 2021,” Krauchi recalls. “So it’s been almost a year that all of this took place. And almost a year that I had to keep it secret. I couldn’t really tell anybody, and it was really hard at times. It was so exciting to think that our Métis beadwork is going to be on a coin.”

Krauchi says when she saw the first drawings and engravings, she was absolutely amazed that they had put what looked like little beads all over that coin.

“I so want to take it out of the case and touch it because when you see people’s beadwork you just want to touch it.”

Krauchi says the Manitoba Métis Federation has played a big part in her work through their support and encouragement over the years and the coin "was a collaboration with MMF, the Canadian Mint and herself."

Growing up, Krauchi’s parents were involved with the Manitoba Museum in Winnipeg. They moved to just outside of Brandon when she was 14 years old. They built a log cabin themselves and lived off the land.

“I grew up in a very Métis household lifestyle, but we didn’t say it that way. We were just living that. Both my mom and dad—even though he wasn’t Métis he learned an awful lot from the Métis people in the Interlake region of Manitoba—they hunted. My mom loved hunting and fishing and trapping and snaring and doing all of those things. She would rather spend time outside than in the house and my dad was the same way. So we lived off the land and it was all wild game.”

When Krauchi moved back to Winnipeg in her 30s, she started spending time in the museum archives looking at old pieces of Métis style beadwork to begin her work teaching at the Métis Resource Centre.

“And that really inspired me because there weren’t too many people who had seen it or remembered what our work was really like. And it was absolutely gorgeous. The colours, the designs they used, which is a combination of French embroidery patterns and, of course, what they saw in nature, and combining the two to make our Métis style pattern. There’s other floral beadwork done by the Cree or the Ojibwe, but ours has a different look to it compared to the rest.”

Krauchi also started doing replica work for Parks Canada, which she says taught her an awful lot because of all the time spent with those old pieces.

“As we call them now, they are like our teachers, and they certainly were. I learned so much from those pieces. And even though there was no name assigned to the piece of who did it, I still felt almost like I was spending time with her.

“Rather than looking at something through glass, I got to see her stitches. We had lost an awful lot when you think about it. The workmanship, the style of the beadwork, the bead colours and the choices of the beads that they were using, almost the same way as they would be using embroidery floss where it would be a shading of reds down to pinks or vice versa. It was really a learning experience.”

That learning experience also included a journey to find the colours of the beads that were used during that time period, search out either replicas or antiques.

Krauchi says her father really wanted them to keep the Métis culture alive. After her dad passed away in 1991, Krauchi continued filling the orders for work he had received and had quite an established sewing business in Brandon. So, when she began beading again in Winnipeg, she knew she had found her true calling.

“With the beadwork it just took off and snowballed from there. It was the first time I really felt like, ‘Yeah, this is the direction I want to go and stay.’”

The process of designing sometimes has a meaning and sometimes it’s based purely on patterns that Krauchi likes.

“Not all of the old beadwork told a story. Beadwork is a very personal thing. It belongs to the person you’re doing it for, but it also has a big part of you in it too.”

Krauchi has many years of designing beadwork for clothing under her belt, including important work like the octopus bag (see Windspeaker May 2018 article Beadwork is an act of resistance) and a picture frame called A Hard Birth.

The frame is five foot by seven and about a foot wide and surrounds the picture of Louis Riel’s provisional government on display at the Winnipeg Art Gallery.

And now she has the new coin. But Krauchi isn’t resting on her laurels. She says she’s excited to move on to new projects and help keep expanding the scope of Métis beadwork across Canada.

“I would say in the last 10, 15 years at the most, the beadwork has just exploded. Now there’s beadwork symposiums and you can fill up auditoriums now with bead workers.”