Beadwork is an act of resistance 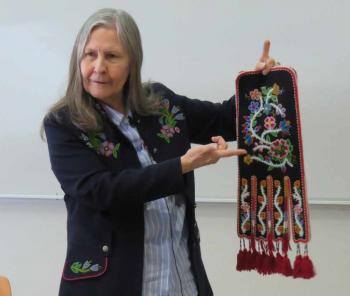 Traditional and contemporary Métis visual art and beadwork was explored during Métis Talks on May 2. The bi-annual event, organized by the Rupertsland Centre for Métis Research at the University of Alberta, featured two speakers from different generations and styles.

Up first was Jennine Krauchi, a Winnipeg-based Métis beadwork artist and designer. She creates clothing and replica work for a variety of organizations, as well as teaches beading workshops.

Krauchi describes herself as a traditional beadwork artist, but also admires contemporary beadwork by younger artists.

“Now we have a whole new generation coming up doing contemporary work and I am so proud of the people doing it, but we also need to know about the masters,” she said. Krauchi said that as little as 20 years ago it would have been difficult to fill a small table with Métis craftwork, but now one can fill an entire room.

Krauchi specifically focused her talk on the “octopus bag,”, something that Métis men would carry everything they needed to start a fire.

Its name is derived from the eight tassels on it, which Krauchi said served no purpose other than decorative. One could tell what region a bag came from by the bead design on it.

She showed a video about a 26-foot octopus bag being installed in the Canadian Museum for Human Rights. Krauchi and her mother did the beadwork for the bag, which was so large it had to be installed in panels. She described the painstaking process where a petal of a flower would take five hours to create with the glass beads. 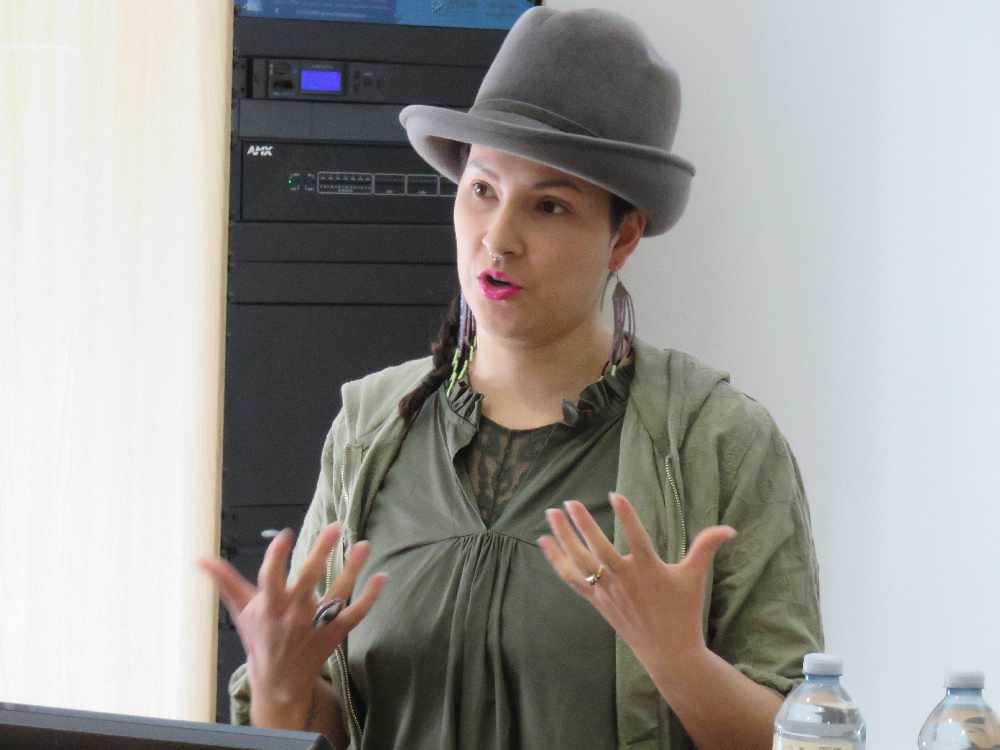 Malbeuf's work has been exhibited throughout Canada and beyond. She has an MFA in Visual Art from UBC Okanagan and has received a number of awards for her work.

“I like to make work that poses more questions than answers, so for me I was questioning the fine line between medicine and poison,” she said of one of her performance pieces where she was covered by, and eventually emerged from, 800 pounds of sugar.

Malbeuf said her main art love is tufting, a form of weaving done by putting animal hair through a medium like bark, then putting multiple tufts together to make a design. She uses caribou, and her research about the animal and its habitat has inspired some of her other artwork as well.

“I was lamenting that I have come to love and appreciate this art form so much at a time when the caribou and their habitat are threatened and endangered,” she said about one such piece.

She also paid homage to traditions like beadwork and its importance in Métis culture.

“Beadwork is resistance. Beadwork is revolutionary,” Malbeuf says. “We are celebrating and being proud of our culture. Being involved in these things make us strong individuals and nations.”

The Rupertsland Centre for Métis Research is an academic research program geared towards Métis issues.