The spirit of the drum 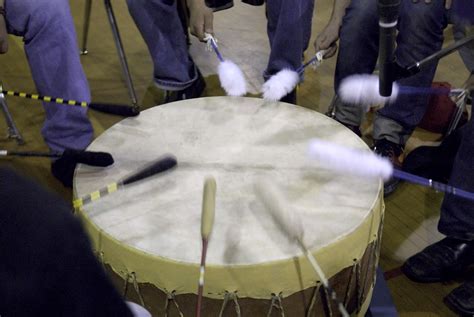 Drums are highly regarded by First Nations people and they consider them to have a spirit of their own. Since early times, the drum has symbolized the circle of life and the heartbeat of Mother Earth.

"Having a drum will humble you and open your eyes," said Gerald Okanee, lead singer of Saskatchewan's Big Bear Singers. "Some people can hear one song and it will change them for the rest of their lives."

Okanee said drum songs are made to be shared in ceremonies given to the people by the Creator.

"Some honor the spirits of the ancestors and ancient traditions. Others just make you feel good, such as the intertribal. Sometimes you can't be too serious. You are celebrating life and powwow singing is a good way to express it," said Okanee.

The drum and the eagle whistle are the most revered of musical instruments among the Plains Cree.

If the drum is the heartbeat of Mother Earth, it is the eagle whistle that sounds with the breath of the Creator.

One of the rarest and most special tributes that can be made to a drum is when an eagle whistle carrier blows his whistle on it.

An experienced dancer will hear a song that he really likes and dance towards that drum, blowing his eagle whistle to keep the spirit of that song alive.

Other men's traditional dancers will go and support him by dancing stationary in the area around that drum.

Spectators stand to offer their energy and support. The drumming and singing intensify until all the energy of the entire powwow is magnified and focused on the drum, the dancers and the eagle whistle carrier.

It is a high point in the powwow, a powerful spiritual experience.

"What I know and can talk about is that the eagle whistle can be blown on a drum for a number of reasons," said Okanee.

"Someone can be sick and the family will ask for a drum and a song to pray to the Creator for help. It could be blown for a friend who needs their spirits lifted up. People can also blow a whistle on a song because it is a beautiful song. For those five or six minutes, it brings us that much closer to the spirits and God and no one can take that away from us. For that five minutes it is all about you, the Creator and the gifts he has given us. We believe that the songs that lift people's spirits, and are worthy of an eagle whistle, come directly from the spirits," said Okanee.

As a lead singer, Gerald Okanee enjoys singing songs from the traditional, rather than the contemporary, streams.

"We sing very old, original style songs, as well as word songs that we know were very special. The original style of singing was basically harmonic sounds. That is why we do not sing in the contemporary style. We believe that word songs were strictly ceremonial, reserved for returning war parties or successful hunts that celebrated victory and plenty for the whole camp. We keep them for special dances and events. Some competition songs are considered ceremonial, such as a slow dignified sidestep for the old-time jingle dress dance, the sneak-up for men's traditional dance or a fast beat for men's fancy bustle," said Okanee.

Early drums were often pegged to the ground with four decorated willow staffs that had sacred rattles attached to them to accentuate the sound. Ancient drummers sat on the ground on a bison robe, connected to the Mother Earth.

Traditionally, there is a man called the drum keeper. His job is to tend the drum and make sure that it is never left alone. He also makes sure that nothing is done to disrespect the drum, keeps it clean and never allows it to touch the ground.

"There are special blankets that are given to the drum specifically for the drum. The spirit of a drum is like a person; you have to keep it warm. It is part of the family and the sole purpose of a drum group is to honor the drum and treat it as you would your fellow singers," said Okanee.

Drums and drum-making reflect all that is traditional in Indian country—respect for the animals, trees, sacred plants, fire and the people you want to sing for.

The creation of a drum is an art form handed down from father to son.

"The maker of a drum must possess knowledge in the cleaning, tanning and stretching of animal skins. The type of hide affects the overall tone. Rawhide from elk, moose and buffalo are used for large powwow drums, while deerskin provides a taut, flexible covering for the smaller hand drums. In ancient times, they used to hollow out a tree trunk for the rim of the big drums," said Okanee.

The hand drum is a more personal instrument in which there is one voice, one song, one spirit.

Hand drums are used with a personal approach that is deeply religious and ceremonial for the sundance, ghost dance, prairie chicken dance, and sweatlodge.

All drums can be painted with the drum-maker's personal totem or the drum group's logo.

When a drum is completed it is passed through the smoke and consecrated by an Elder.

"Traditional drumsticks are made of wood, leather and rawhide lacing. Modern drumsticks made of fiberglass are sturdier and hold up better on a punishing powwow schedule."

"Over the course of the week, the weather plays a large part with the effects of temperature and humidity. When it gets too cold the drum tends to go flat and loosen up. Tuning by way of fire tightens up the straps and hide, giving the drum a higher pitch and tone."

"I have been fortunate and blessed to have great teachers and Elders to learn from and guide me in the way of the drum. I am always ready to share my knowledge and initiate our young ones into the same style and way of life," said Okanee.