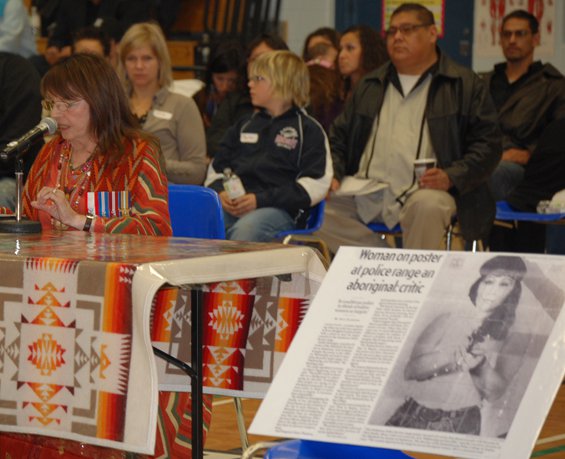 Tina (Dillon) Wolfe is still grieving the loss of her friend Violet Heathen. Heathen went missing in 2009. Heathen is one of more than 600 missing or murdered Aboriginal women and girls that the Native Women’s Association of Canada has documented.

“To this day, it’s still a cold case,” said Wolfe. Both women are from Onion Lake Cree Nation and both attended St. Anthony’s residential school.

“I always prayed they would find her killer.”

Canada has refused to heed the recommendation that came in September from the United Nations’ Human Rights Council to conduct a comprehensive review of violence against Aboriginal women, so Wolfe isn’t confident she, or Heathen’s family, will be getting answers any time soon. She is not surprised by Prime Minister Stephen Harper’s stand on the issue.

“He’s always been like that,” said Wolfe. “He’s never ever agreed to any terms. When it comes to our people, he’s more interested in helping the other people. I’m not talking racist. I’m just stating facts.”

The UN direction is just the latest received by the federal government. Last May, the premiers supported a call by Aboriginal leaders for a national inquiry into the issue surrounding missing and murdered Aboriginal women. A petition put forward by NWAC calling for such an inquiry has garnered 10,000 signatures and is to be submitted to the federal government in early December. But still Harper says no, insisting that the issue is better handled at the provincial and territorial levels.

Muriel Stanley Venne, president and founder of the Institute for the Advancement of Aboriginal Women in Edmonton, doesn’t agree.

“It isn’t fair to say that. (IAAW) has struggled first to bring the issue front and centre, which is very difficult when people already know and have avoided, and in fact determined, that there was nothing to do. I would see that what’s needed is a national plan to deal with the deaths of Aboriginal women, and where everyone is involved because it isn’t just the deaths of the women, it’s a persecution of a people,” said Stanley Venne.