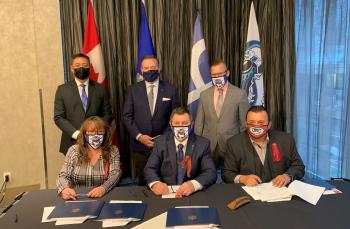 “There was no consultation and there’s no framework for consultation in Bill C-48, the tanker moratorium. That’s violating the constitutional principle of the Crown’s duty to consult, grounded in the honour of the Crown and that’s why we think there’s a credible legal claim to be made in this instance.” — Alberta Premier Jason Kenney
By Shari Narine
Local Journalism Initiative Reporter
Winspeaker.com

Métis Week in Alberta was kicked off with the Métis Nation of Alberta (MNA) throwing down with the UCP government and two northern Métis Nations.

In a pre-emptive move Nov. 15, not even 30 minutes before Premier Jason Kenney and Indigenous Relations Minister Rick Wilson were to sign a funding agreement with the Fort McKay and Willow Lake Métis Nations, the MNA issued a news release strongly condemning the Alberta government for getting involved with “a handful of unaccountable, undemocratic and illegitimate organizations.”

The province announced that Fort McKay and Willow Lake Métis Nations had been awarded $372,000 through Alberta’s Indigenous Litigation Fund to begin a constitutional challenge of federal Bill C-48, the Oil Tanker Moratorium Act. It protects a remote region in northern British Columbia—Hecate Strait, Queen Charlotte Sound and Dixon Entrance—from the risk of spills by prohibiting tankers carrying more than 12,500 tonnes of crude oil or certain other types of oil.

Federal legislation, like this one, “make(s) it harder for First Nations and Métis communities to set up long-term economic development projects,” said Wilson in a Twitter post.

Poitras accused Kenney of making “a bad decision”. She said the MNA is the “only recognized, accountable and democratically elected government of Métis citizens in Alberta.”

The federal government also signed a framework agreement with the Métis Settlement General Council (MSGC) in 2018 to renew a government-to-government relationship. The MSGC is the governing body for the eight Métis settlements in northern Alberta.

Both Kenney and Wilson dismissed Poitras’ claims to being the sole voice for the Métis in Alberta.

“We work constructively with Indigenous groups across the province and I don’t think it's reasonable for one person to say every Métis community needs to go to her to have permission to have a perspective (funding agreement),” said Kenney.

Kenney pointed to Alberta Health and Alberta Health Services partnering with the MNA this past summer to administer first and second doses of the COVID-19 vaccines in five clinics for Métis throughout the province.

The credible assertion process, updated in December 2019 by the UCP, outlines nine points that if met by a Métis organization commits Alberta to consulting with that Métis organization on Crown land management and resource development.

“The difference between ourselves and the Métis Nation of Alberta is we are rights-bearing Métis people,” said Ron Quintal, president of the Fort McKay Métis Nation. “Fort McKay’s rights have been recognized through the credible assertion process, meaning that we are a recognized Powley community with harvesting rights as well as consultation rights. The first community in Alberta history to be able to achieve that.”

Quintal pointed out that neither Fort McKay nor Willow Lake had membership in the MNA.

In fact, both those Métis Nations, along with Athabasca Landing, Owl River, Lakeland, Chard and Edmonton, split from the MNA in 2020 to form the Alberta Métis Federation.

In a news release issued on Monday by the province in recognition of Métis Week Nov. 14 to Nov. 20, Wilson noted that Alberta is home to more 114,000 Métis people.

As for the funding provided to Fort McKay and Willow Lake Métis Nations by the province for legal action, Poitras stated, “The MNA will be there to underscore how these individuals and organizations do not represent Alberta Métis. The courts will scrutinize the credibility of these claims. It is unfortunate that the Premier of this province has not.”

Kenney said Poitras was “factually inaccurate” in her claim that this proposed court action would be challenging federal legislation that ensured consultation with Métis on projects. He suggested she was confusing Bill C-48 with Bill C-69, the Impact Assessment Act. In 2020, the province provided $187,688 to the Woodland Cree First Nation to to intervene in support of the province’s constitutional challenge of that bill.

“There was no consultation and there’s no framework for consultation in Bill C-48, the tanker moratorium. That’s violating the constitutional principle of the Crown’s duty to consult, grounded in the honour of the Crown and that’s why we think there’s a credible legal claim to be made in this instance,” said Kenney.

“I don’t want to comment in relation to the Métis Nation of Alberta because it’s a lot of nonsense. We’re already in the middle of a number of litigation cases with the Métis Nation of Alberta and I don’t think it’s appropriate for them to be able to condemn anything when they better look in the mirror if they’re gong to be condemning any type of malfeasance or inappropriate behaviour,” said Quintal.