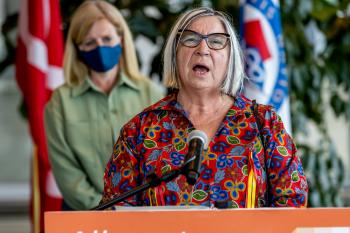 “Alberta deliberates endlessly on whether to consult with Métis communities, using a case-by-case approach that is tangled in red tape …. This is systemic racism in action.” — Métis Nation of Alberta President Audrey Poitras
By Shari Narine
Local Journalism Initiative Reporter
Windspeaker.com

The MNA says the UCP has refused to continue negotiations on a Métis consultation policy that the MNA was ready to sign right before the last election when Albertans ousted the New Democratic Party and ushered in the UCP.

Referring to the UCP’s decision to abandon negotiations as “systemic racism in action,” MNA President Audrey Poitras said she and her citizens are tired of being treated “as a second-class Indigenous people.”

“We are the only people, Indigenous people to Alberta, whose rights are not protected by a consultation policy. Instead, Alberta deliberates endlessly on whether to consult with Métis communities, using a case-by-case approach that is tangled in red tape …. This is systemic racism in action,” said Poitras

A Métis consultation policy would ensure that Métis communities are consulted on land use decisions that affect their Indigenous rights. Similar policies in Alberta exist for First Nations and the eight Alberta Métis Settlements. These policies are part of the Crown’s obligation to act honourably with Indigenous people, including negotiating and consulting in good faith on issues that will impact them, said the MNA in a press statement.

Poitras was joined in support by NDP leader Rachel Notley and Indigenous Relations critic Richard Feehan at a news conference June 14 to announce the court action.

Feehan was the NDP minister who took up negotiations with Poitras and the MNA for the consultation policy, continuing on the heels of the former Conservative government.

“We were very close in terms of arriving at a consultation agreement. The factors that were involved, they didn’t involve just the government of Alberta and the MNA; there were other people who needed to be part of the conversation and that all hadn’t got to the place where we needed it to at the time,” said Feehan.

He also pointed out that later the MNA and Canada signed a recognition and self-government agreement and “that would certainly have helped us move (the consultation policy) ahead.”

Now, said Feehan, “it’s horrible” that the MNA doesn’t have a seat at the table with the UCP government.

Poitras said her people are patient and would rather negotiate than litigate, but it is now two years into the UCP mandate and it is time to take legal action.

The 83-page brief in law from the MNA calls the UCP government out for not continuing to negotiate “in good faith.”

“The Crown’s obligations cannot be suspended simply because there is a change in government. Prior to making the Decision, the Minister was required to consider the negotiation history that came before him—as a Crown decision-maker, not just as a Minister of a newly formed provincial government,” reads the brief.

Despite a request from Poitras to continue discussions, the UCP “fell silent,” states the brief. Then Poitras received a letter in September 2019 saying, “Alberta will not be moving forward with the draft consultation policy.”

The brief points out that in an August 2019 UCP briefing note, Alberta promoted the credible assertion process as a viable alternative to the consultation policy, since the process was open to all Métis organizations that chose to be consulted.

The credible assertion process is one that assesses the individual members signed on to a Métis organization. It doesn’t assess proof of recognition or rights, only that some contemporary Métis community members of an organization are ancestrally connected to the historic Métis community.

However, the briefing note also states that no Métis organization had, to date, established a credible assertion.

Poitras still holds that to be true, despite the UCP government deciding in February 2020 to conduct Crown consultations with the Fort McKay Métis Community Association as an organization that had established a credible assertion.

Poitras insists the decision to take legal action against the province is not connected to the UCP’s decision to consult with the Fort McKay Métis association while excluding the MNA.

The MNA is seeking the court to declare, in part, that “Alberta has an ongoing duty to negotiate with the MNA” in respect to a Métis consultation policy.

Notley pledged that should the NDP form the next government there will be a Métis consultation policy.

“I certainly hope she meant what she said….I believe all governments have the responsibility and an obligation to do what is right. It’s the honour of the Crown we’re talking about,” said Poitras.

The MNA’s claim is to be heard before the Alberta Court of Queen’s Bench on June 17 and June 18.