Survival the subject of two films by Cree filmmaker 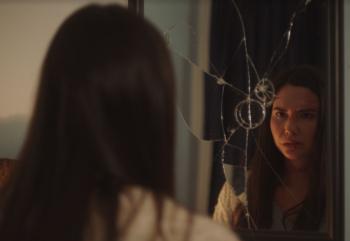 Actress Sera-Lys McArthur as Angel in the film "Broken Angel."

“This is something our communities are dealing with every day, and I felt it was important to provide some kind of insight and awareness.” — filmmaker Jules Arita Koostachin
By Crystal St.Pierre
Local Journalism Initiative Reporter
Windspeaker.com

It has been a busy couple weeks for two new films Broken Angel and MisTik, written, directed and produced by Cree filmmaker Dr. Jules Arita Koostachin.

Broken Angel, a dramatic thriller, stars Sera-Lys McArthur from Outlander and Monkey Beach, Asivak Koostachin, who had roles in Run Woman Run and Letterkenny, and Brooklyn Letexier-Hart from Night Raiders and Burden of Truth.

The film follows Angel and her daughter Tanis as they leave their home in the night to flee from Angel’s abusive partner Earl. The pair escapes to a women’s shelter run by Angel’s foster mom deep within a forest on a reservation. There she connects with her family and community and goes on a journey of self-discovery.

“As you know we are still dealing with missing and murdered Indigenous women. This is something our communities are dealing with every day, and I felt it was important to provide some kind of insight and awareness,” said Jules Arita Koostachin.

The storyline speaks to the situations that Koostachin witnessed when she worked as social worker.

People who have never been in these abusive situations have a hard time understanding why women just don’t leave, she said, but there are so many factors that contribute to that decision, like finances, mental abuse and the psychological impacts of abuse on a women’s self-esteem. There’s even spiritual reasons why a person can’t leave an abusive situation.

The desire to put these tough challenges women face on to the big screen is exactly what led actress McArthur to the Broken Angel script.

Born and raised on Pheasant Rump Nakota First Nation in Saskatchewan, McArthur said she has many close friends who have faced this hard journey of abuse.

“I’ve met people who have gone through some things,” said McArthur. “It’s not a black and white answer. There’s many different reasons why people end up in abusive relationships. What I loved about this script is it really delved into the psychology behind it and the person’s experiences. It’s definitely an accessible universal story.”

In spring of 2023, Broken Angel will premiere on the Aboriginal People Television Network (APTN). McArthur hopes the film will provide inspiration to viewers who are going through similar situations and for the people who support them to gain a better understanding of the personal dilemmas each individual goes through when considering to leave.

“I hope they can see the different levels of struggle of what it’s like to be abused in different ways, not just physical abuse. There’s a lot of psychological and emotional levels to why someone would stay in the situation they are in or feel unable to change their lives,” she said.

McArthur was honoured on Oct. 26 when a special event screening of Broken Angel was held at the Cineplex Cinemas Southland in Regina.

Her Nation bused people to the venue, provided supper and everyone enjoyed the special event.

Koostachin’s second film MisTik is a short film in a post-apocalyptic time where Cree twin boys survive and go in search of community while carrying the last of the healthy trees on their backs.

“They are in search of hope and other community members,” explained Koostachin.

The script was written during the pandemic and Koostachin said she was compelled to write a film that showed Indigenous people surviving.

“We never really see Indigenous people in post-apocalyptic films. Why don’t we ever see Native people as survivors?” she questioned. “We have the skills. We have the knowledge. We have Indigenous knowledge. We know how to live off the land, and how come we are never reflected in these stories because we would be the ones who survived.”

Currently the team is presenting the film to various streaming outlets and is hopeful one will be chosen soon so MisTik will be available to the public.