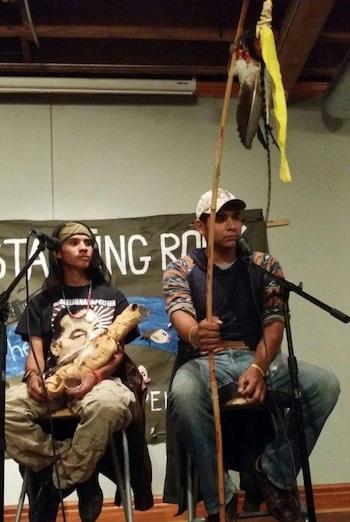 “We are protecting what is ours and what is sacred. Water is our first medicine. We were in the womb for nine months. There’s no way we can survive without water." ~ Wilma Steele of Standing Rock Nation

“I made a vow to protect the land and to protect the water, but most of all, I would protect my children and that’s what I’m doing,” said Wilma Steele of Standing Rock Nation. She has four children ages 9, 5, 3 and 2 years old.

“They’re my motivation,” she said. “They’re my strength to keep me going. When I look at them, I tell myself, ‘I gotta fight harder against this pipeline’.”

The planned Dakota Access Pipeline would go through the Standing Rock territory and would carry crude oil through four states—North and South Dakota, Iowa and Illinois, putting land and major waterways at risk. The proposed route crosses the Missouri River, the longest river in the United States.

Twenty-six-year-old Steele was in Toronto on Oct. 8 to create awareness and to generate support for the Standing Rock Sioux who are standing against the Dakota Access Pipeline. She was travelling with two other young people from the Oceti Sakowin Camp at Cannon Ball, North Dakota. Montgomery Brown, also from Standing Rock, and Terrell Ironschell, Oglala Lakota from Pine Ridge area joined her.

Brown and Steele were two of the 40 youth who ran from Cannonball, North Dakota to Washington, DC for a period of three weeks in August and September. It was on that run that Steele made her vow.

“We are water and land protectors,” Steele said. “We are protecting what is ours and what is sacred. Water is our first medicine. We were in the womb for nine months. There’s no way we can survive without water. I get emotional because I’m talking about my children, what could happen to them and their future. I don’t want them to be standing in line for water when they get older.”

Steele, Brown and Ironschell were accompanied by Terrylynn Brant and Wes Elliott who were appointed by the Haudenosaunee Confederacy of Six Nations to escort them. “We are the people that will escort them into the territory and be responsible for them while they’re here in our communities in our territories,” Brant said. “We are charged with them, making sure they get to attend the ceremony and follow the proper protocol.”

Brant said that there was a strong historical alliance between the Haudenosaunee and all the Sioux Nations.

“Sometimes, we need to renew those relationships,” she said. “We have connections that are sacred to us and important to us and we keep those things alive and remind ourselves as if it was just made yesterday. And it might have been 200 years ago. We have certain people within our Confederacy that have the responsibility of remembering those things. So when they come back to visit with us and talk with us, those nations, the first thing we do is go back in history and say,’remember the last time you were here? This is where we were and this is what we agreed to and this is what was on our minds’.”

“We don’t forget any of the agreements we had with any of the other nations on Turtle Island,” Brant said. Sometimes, she continued, “you have to work very quickly in our territories because of the matter at hand.”

Steele issued an invitation to people to go to the camp and “come stand and support us. When it all started,” she said, “there was 7,000 people and we were like the 13th largest population in North Dakota. We weren’t called a camp anymore. We were called a community. It’s amazing to see all these nations come together,” she said.

“Some of these nations have been fighting for hundreds of years,” Steele said, “and to have them come to our territory and say, ‘we’re gonna stand with you and we are going to fight with you’ is one of the best feelings ever. It brings so much emotion and the camp is amazing. You can feel the positive energy. You can feel the spirits. It’s very spiritual there.”

The camp is making history, she said and “years down the road, we can tell our children we helped stop this pipeline.” A leak in the pipeline can eventually end up in the Gulf, she said, and would affect 18 million people.

“This isn’t a Native American issue. This is everybody’s issue,” Steele said. “Everybody needs to come together as a unit and we need to fight this pipeline. We need to tell them, we don’t stand for this. We’re not gonna be silent anymore’.”

About 200 people had crowded into Beit Zatoun in Toronto to meet the young people and to raise funds to help them winterize the camp. Local community organizer Carrie Lester, the Haudenosaunee Nation and other volunteers pulled the evening together in five days.

Local entertainers donated their time and talents, and artists and community members donated many items, including paintings, jewellery, T-shirts, posters and massage treatments for the silent auction. The evening generated more than $3,500 for Standing Rock.

Terrylynn Brant said the message carried by the young people was very well received by the Toronto crowd. She had advice for people who are considering a visit to Sacred Stones Camp.

“Why are you in there? What is your back-up plan in case of emergency? Before you go and do something; make sure you have permission. Have you thought about it? Are you in a position to be arrested? What you do as a young person could affect you for the rest of your life.”

The Standing Rock Sioux suffered a setback on Monday, Oct. 10. NBC News reported the U.S. Court of Appeals for the District of Columbia Circuit rejected the tribe's request for a permanent injunction to block the $3.7 billion, 1,170-mile pipeline. Standing Rock Tribal Chairman Dave Archambault II reportedly said they are not done with the fight. 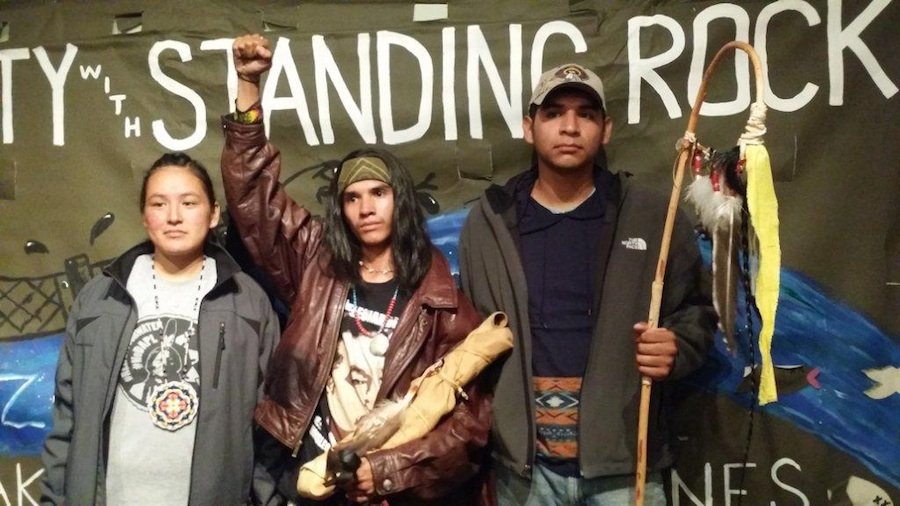