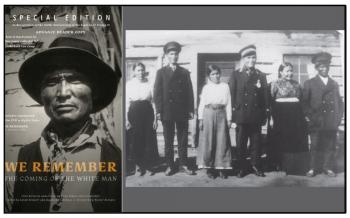 The cover of the special edition of ‘We Remember the Coming of the White Man’ with a archival photo titled 3_Sahtu_Chiefs.

“As I transcribed their words, I got to know the Elders. I learned from them. I laughed with them and I cried with them while I worked. It was like I felt their presence, both then and now.” — co-editor Sarah Stewart
By Shari Narine
Windspeaker.com Contributor

It’s been 100 years since the signing of Treaty 11, known as the last of the Numbered Treaties signed, and the occasion has been marked by a book that chronicles the history of the Sahtu (Mountain Dene) and Gwinchi’in People.

The second or special edition of We Remember the Coming of the White Man was launched virtually on Sunday, April 18 at Audrey’s bookstore in Edmonton.

The stories from 10 Mackenzie Valley Elders, all of whom are now deceased, are powerful, said co-editor Sarah Stewart.

“As I transcribed their words, I got to know the Elders. I learned from them. I laughed with them and I cried with them while I worked. It was like I felt their presence, both then and now,” she said.

Those transcriptions come from interviews that were recorded as part of the 1978 documentary of the same name made by Stewart’s late husband Bill Stewart and film director-author Raymond Yakeleya. The film was the winner of the Best Documentary Feature at the 1980 American Indian Film Awards in San Francisco.

“Who knew it would take 40 years for this book to be born?” said Sarah Stewart. The book is a necessity, she said, as the film only used two hours of the 24 hours of interviews recorded from the Elders.

The Elders tell of the time that the White Man came and about the signing of Treaty 11 in various locations in 1921 and 1922 and how life changed. Their words are shared in English and Dene Gwich’in and are supported with archived and more recent photographs and artwork.

Book co-editor Yakeleya, whose home community is Tulita, NWT, has a personal connection to the treaty as both his grandfathers signed it. He is firm in his belief that what they signed was not represented to them correctly.

“In a contract it is required that both parties know the deal,” he said. “Our translators could not translate the legalese language into Dene language.”

Yakeleya said Canada’s intention was to claim the oilfield in Norman Wells, but they couched the treaty in words of “peace and friendship. That’s what stuck with our people.”

He said the Canadian government followed the tried-and-true pattern of bringing in a priest. As most of the First Nations in the area were Roman Catholic, the people believed the priest would not deceive them. Although initially wary of the treaty, with the encouraging words of Bishop Breynat “people started thinking differently.” When the treaty was signed, Canada said it was for land, despite chiefs refuting that claim.

“At the end of the day Treaty No. 11, to me, was the greatest thievery of the resource, which was a great resource, because oil is what makes the world run,” said Yakeleya.

More than that, said Antoine Mountain, contributing writer and artist, was that the Dene people’s generosity was taken advantage of.

“One of our faults of being Dene is we extend ourselves a bit too much. We don’t hold anything back for ourselves,” said Mountain.

The special edition of We Remember the Coming of the White Man is distinguished from the first edition as it opens with a section of essays relating to the 100th anniversary of Treaty 11 and ends with stories about legends. Joining Yakeleya, Mountain and Stewart in writing the new works are Walter Blondin, Colette Poitras, Leanne Goose, and the late George Blondin.

The first edition had a limited release during the first stage of the coronavirus pandemic, but still managed to sell out by the end of 2020, said publisher Lorene Shyba of Durvile Publications.

Shyba said she and Yakeleya decided to add to the text and create a special edition instead of reprinting the first.

Goose, who was also one of the narrators of the audiobook, calls it an “incredible project.”

“I became totally enthralled with the words of the Elders, in sitting in just the grace that they had in telling the stories about incredible skills, about the way that they thrived through so many difficult challenges. The words that Sarah and Raymond collected, they’re ways for us to be able to reconnect with who we are, where we’ve come from and the path forward,” said Goose.

The special edition of We Remember the Coming of the White Man can be purchased at https://durvile.com/Shopify/Buy_WeRemember_SE.html or ask your local bookseller.