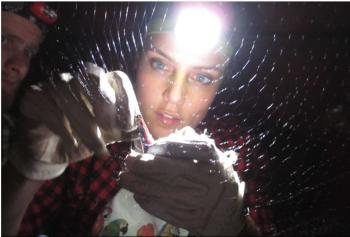 “It was in a lot of conversations with local trappers and harvesters where we’d start talking about something we’d just found out [as scientists], and the land users would say ‘Yeah, we’ve known that forever’.” — Dr. Allyson Menzies
By Rebecca Medel
Local Journalism Initiative Reporter
Windspeaker.com

Monitoring and improving animal and plant life cycles and water quality, passing down traditional and spiritual practices, and weaving together Indigenous knowledge and western science are the top concerns presented in a recently published report on how climate change is affecting Indigenous peoples in Canada.

“I see my culture starting to disappear”: Anishinaabe perspectives on the socioecological impacts of climate change and future research needs was published on April 7 in Facets, the official journal of the Royal Society of Canada’s Academy of Science.

The work took a ground-up approach to conducting workshops, starting in November 2019 with members of Anishinaabe First Nations. Later that work expanded to include voices from across Canada.

“This project really emerged from people on the ground saying we’re concerned about climate change and we want to talk about this more. We want our voices to be heard in these conversations about what’s happening in our lands,” said lead author Dr. Allyson Menzies.

She says there has been a lot of discussion about climate change affecting Arctic regions, but not so much focus on the Great Lakes area.

“But as everyone knows, climate change is happening everywhere. So that was another key factor of this study: a lack of information in the scientific literature about this area.”

Menzies is originally from Manitoba and is Métis. She became interested in traditional ways of knowledge transfer when she was doing her doctoral work in wildlife ecology in the Yukon.

“It was through the experience of being up north that I started to have this dissonance in my mind about how research has been done for a long time, and how scientists tend to be the loudest voice in all conversations about conservation and climate change, but there’s so many people out there who know so much about what’s going on,” she said.

“It was in a lot of conversations with local trappers and harvesters where we’d start talking about something we’d just found out [as scientists] and the land users would say, ‘Yeah, we’ve known that forever’. I was really hit with the fact that I'm learning this for the first time, and it’s new to scientific literature, but that doesn’t mean it’s new knowledge to everyone.”

The lack of cooperation between scientists and Indigenous knowledge keepers led to one of the outcomes of the project. That was figuring out how to work better together and understanding what meaningful relationships look like, and moving on from just discussing climate change to building respectful relationships.

Based on conversations from the workshops, project coordinators learned that the Indigenous community is eager to work with scientists to develop solutions to climate change. There is an acknowledgement that if something doesn’t change, traditional ways of life will not be able to be passed down to future generations because the environment has been altered so much.

“All of the participants understand the benefits of western science, especially that you sometimes need modern tools to solve modern problems and that some traditional knowledge isn’t applicable in every situation.

“But the desire is to have Indigenous knowledge and values help guide where the science is going as opposed to being seen as second rate or inferior to science.”

Menzies sees a resolve amongst First Nations people to have their young populations involved and working alongside the scientific community.

“It’s not black and white. It’s not just knowledge or science. It’s having all of the ways to figure out what’s going on,” Menzies said.

“We are continuing to work on specific questions related to wildlife and are working with communities to build environmental monitoring programs. A really big step forward would be to link this research with actual policies and outcomes."

Nine contributors, including Dr. Jesse Popp, a member of Wiikwemkoong Unceded Territory and Canada Research Chair in Indigenous Environmental Science, undertook the project and authored the “I see my culture starting to disappear” report. Click link below to read the work:

“I see my culture starting to disappear”: Anishinaabe perspectives on the socioecological impacts of climate change and future research needs (facetsjournal.com)