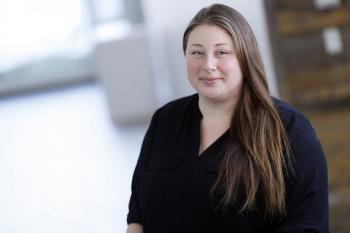 “I plan to use the research funds to help mentor more students who can go on and help make the world a more inclusive place with skills that right now aren't really easy to come by.” — Dr. Jesse Popp
By Adam Laskaris
Local Journalism Initiative Reporter
Windspeaker.com

It’s actually Popp’s second time serving in the research chair role, which will see her work receive funding worth $500,000 over five years from the federal government’s Natural Sciences and Engineering Research Council.

“I feel incredible to be recognized for the work I've done so far and the work that I can do in partnership with so many people… I’m very excited,” she said about her second selection.

Popp was recognized alongside fellow Guelph researcher Carla Rice, who is working in the Feminist Studies and Social Practice research chair position.

“This is richly deserved recognition of these fantastic University of Guelph researchers, who are advancing knowledge and understanding in ways that will improve lives for many people across Canada and worldwide,” said Dr. Malcolm Campbell, University of Guelph’s vice-president of research.

Popp, a member of Wiikwemkoong Unceded Territory, said the collaborative nature of her work allows her to draw insight from Indigenous communities across the country.

“When you have people who are so familiar with the environment and its changes through time, or have that place-based knowledge… you can see things that maybe others—researchers like myself—who are not familiar with those regions would have no idea,” she said.

Popp also touched on the breadth of Indigenous knowledge she’s encountered through her work, which she called “as diverse as the nations and lands they are a part of.”

“I don't really find [my work] overwhelming because I work in partnership with communities on Indigenous-led research projects,” Popp said. “Those communities and peoples are very familiar with the lands they're part of. So that's what makes this type of work just so interesting and amazing.”

Popp said her education at Laurentian University, where she earned her Bachelor’s, Masters and PhD, lacked an Indigenous perspective.

“In university, and even in school in general, I was exposed only really to Eurocentric worldviews and never Indigenous perspectives or worldviews or ways of knowing,” Popp said. It excluded the horrendous impacts of colonization on Indigenous people growing up, including my family.” Popp’s ancestry is Anishinaabe on her mother’s side and European on her father’s side.

“I wanted to start becoming the change that I wanted to see in the world.” She said “Indigenous worldviews and knowledge systems should be part of Natural Sciences and should be equally valued and included. And so it wasn't until, I guess, I went to university and saw the lack of diversity that I really knew I wanted to be part of that change.”

Popp hopes that her work will be transformational in Natural Science and in the spirit of reconciliation.

“I plan to use the research funds to help mentor more students who can go on and help make the world a more inclusive place with skills that right now aren't really easy to come by. So the more people we have learning these experiences and learning this knowledge, the more people who will go on to plant those seeds in the future… Our youth are the next generation of changemakers.”

And while the ongoing reality of working in a field with often devastating realities, Popp says she aims to focus her work on advocating for meaningful change.

“Currently, we’re collectively facing — everyone , every spirit on the planet —  all these enormous environmental concerns and they can be really depressing. But one thing I never do is I never give up hope,” Popp said.