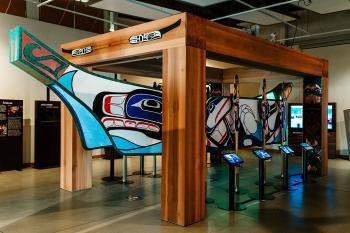 The Sacred Journey travelling exhibit will open in Vancouver at Science World on July 15. Photo of the exhibit in Campbell River by Bluetree Photography.

Almost 40 years ago, during Expo ‘86, members of the Heiltsuk tribe in Bella Bella, BC built an ocean-going canoe and paddled it down to False Creek and the Plaza of Nations in Vancouver. On July 14, that journey will come full circle as hundreds of canoes paddle into False Creek, with the final destination Science World, to launch the Sacred Journey exhibit.

Hereditary Chief Frank Brown of the Heiltsuk Nation has been working hard to help bring about the Sacred Journey travelling exhibit. A soft launch at the Campbell River Museum last fall paved the way for the exhibit to make its home at Science World for the next eight months.

Brown remembers the summer of ‘86 well.

“The theme of Expo ‘86 was Transportation and Communication, and I didn’t feel like we were being represented or had a voice. I was just a young man at the time and working at the friendship centre in Vancouver before starting college and I said ‘We should carve a canoe and paddle it down the coast so that people could know who we are as Native people.’ And we did.”

Brown said it was a very important statement at the time to see one canoe paddling down the coast from Bella Bella to Vancouver.

Sacred Journey tells the powerful story of a people reclaiming traditions and ways of life, particularly through the annual Tribal Canoe Journeys taken to revitalize cultures, heal communities, and empower the next generation. At archaeological site on Triquet Island, West Coast peoples have been found to have used ocean-going canoes as many as 14,000 years ago.

After Expo ‘86, community members organized the first large-scale tribal canoe journey in 1993 and another in 2014. The resurgence of canoe culture over the last few decades has helped West Coast peoples focus on decolonization and cultural revitalization.

“Amongst the Heiltsuk Nation and other Indigenous peoples, the last 150 years have seen massive societal changes that have had devastating and detrimental impacts on our people,” Brown says. “During this time of suppression and technology change, the ocean-going canoe, the Glwa, was almost lost. Sacred Journey allows us to share the knowledge and experience of this journey from an Indigenous point of view.” Brown.

“Tribal journeys have become an important teacher and cornerstone for awakening our cultures and languages,” he said. “This exhibition is a chance for the public to immerse themselves and go on a canoe journey they otherwise wouldn’t get to experience.”

The exhibit features art pieces by Heiltsuk artists, including a monumental canvas canoe painted with four large Heiltsuk clan crests; overarching houses posts and paddles to accompany the canoe; and a carved eagle-human mask to welcome visitors at the entrance of the exhibit. It is an interactive exhibit with audio and video elements to give visitors a deeper understanding of tribal canoe journeys.

The Heiltsuk are a seafaring people with more than 14,000 years of continuous use and occupancy of their territorial waters along the Pacific Northwest Coast and are leaders in the resurgence of ocean-going canoes and culture. They are an amalgamation of five tribes.

“Our team is so grateful to display this exhibition, celebrating Indigenous canoe culture,” said Tracy Redies, president and CEO of Science World. “Science World strives to be a positive, accessible, and culturally safe place that shares important human stories. We are honoured to present Sacred Journey, to share a powerful story of canoe resurgence as told by its leaders, and to uphold narratives of Indigenous peoples as knowledge keepers.”

Brown is proud of the impact of programs like the Tribal Canoe Journey has had in affirming young people and their identity as Indigenous place-based people and how it helps to advance economic opportunities for them in fields such as conservation, guide and guardianship training, and stewardship of the land and water.

“It has empowered the youth and that’s the point,” Brown says. “This is something we’ve been doing for 30 years. And I think we can clearly say that this is proven, the proof of concept is solid and it’s looking back to move forward. We’re relying on our ancestral laws and teachings to inform our strategy moving forward in a sustainable way.”

The 2,000-square-foot exhibition is on display from July 15 to Feb. 20, 2023 and is accessible in both official languages. Tickets can be purchased at Science World. To learn more visit https://www.scienceworld.ca/exhibition/sacred-journey/

“We welcome people to come and visit the exhibit. I think it’s going to be informative, educational and empowering,” Brown says. “That’s why we did it. We wanted to be able to hold up this incredible technology, this incredible knowledge, and wanted to break down barriers, stereotypical views of who we are.”

“Reconciliation begins with listening, learning, unlearning and relearning. The Sacred Canoe Journey exhibition helps rediscover and reinstate the importance of the ocean-going canoe in Indigenous lives and culture in the Pacific Northwest,” said Jonathan Fowlie, chief external relations officer at Vancity, a sponsor of the exhibit. “It powerfully demonstrates how Indigenous peoples are reclaiming a cultural mainstay nearly lost to colonization, using it again as a source of pride and empowerment.”

Chief Councillor Marilyn Slett said, “As a people, we have survived the legislated assimilation policies of Canada. We have taken steps to revitalize our traditional customs and family values that promote a strong sense of Haitzaqv identity.”

In the Science World atrium during the Sacred Journey exhibition, there will be a photo series called Bákvḷá, a Heiltsuk word that loosely translates as “gathering and harvesting food for winter.” This series is interpreted by Margaret Brown, a residential school survivor and one of the few remaining fluent Heiltsuk-language speakers. Bákvḷá is co-produced by the Heiltsuk Nation and co-curated by Frank Brown, Ayla Brown, and Vina Brown, Heiltsuk Nation; and William Knight, Canada Agriculture and Food Museum. It will be accompanied by a 20-foot long by 18 inches wide dugout canoe carved by the Canoe Cultures Society.