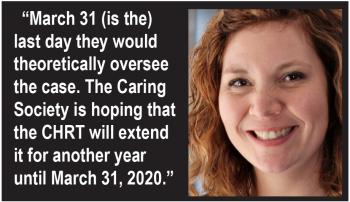 “The other options are litigation. I’m not sure what kind of position we would take, but we want to make sure we see this through.” —Andrea Auger, reconciliation and research manager, Caring Society.
By Shari Narine
Windspeaker.com Contributor

The latest interim ruling by the Canadian Human Rights Tribunal that directs the federal government to deal with off-reserve First Nations children based on the urgency of their needs and not on Status versus non-Status consideration could be one of the final rulings from the CHRT on Jordan’s Principle.

Andrea Auger, reconciliation and research manager with First Nations Child & Family Caring Society of Canada, says the CHRT only has jurisdiction over implementation of Jordan’s Principle until the end of this month.

“March 31 (is the) last day they would theoretically oversee the case. The Caring Society is hoping that the CHRT will extend it for another year until March 31, 2020,” said Auger.

When the March 31, 2019 deadline was set, there were no provisions put in place for a situation where the federal government had not met all the compliance orders.

As it stands now, according to a recent tweet from Cindy Blackstock, executive director for the Caring Society, “12 years ago tomorrow (Feb. 23) we filed the human rights case against Canada for discriminating against First Nations kids. Yesterday (Feb. 21), the Tribunal issued its 7th non-compliance order against Canada.”

“The government has complied with some of the orders. It’s not to say they have not been doing work... There’s still quite a bit of work to be done going forward,” said Auger.

In the latest non-compliance order, the Caring Society challenged the federal government’s decision to not fund medical transportations services for “Baby SJ” because the baby did not meet the government’s definition of First Nations children.

In May 2017, Canada was directed to apply Jordan’s Principle according to what was set out by the CHRT, including equal application to all First Nations children on and off-reserve; ensuring there are no gaps in government services; and the government department of first contact is to pay for the services.

The CHRT found the government’s decision to not fund services for “Baby SJ” was made on a “bureaucratic approach” because of the baby’s lack of Indian Status. It ordered that urgent or life-threatening services be provided based on the evaluation of a health, or other, professional and not according to Indian Status.

Auger said it is unclear how many children this will open services to. She says this uncertainty is due to the lack of data on the number of First Nations children in Canada, as well as the lack of knowledge parents and caregivers have about the scope of Jordan’s Principle, which includes all publicly-funded children’s services.

Regarding the definition of First Nations children, the CHRT stressed that its orders are not meant to override or prejudice First Nations rights on self-determination and citizenship issues. A separate hearing is to take place to discuss the definition of a “First Nation child” for the purposes of Jordan’s Principle. No date has yet been set for that hearing.

What will happen with new issues that crop up—as well as issues that the federal government remains non-compliant on—is unclear. That is why Auger says the Caring Society would like to see an extension on the CHRT’s mandate.

“(The CHRT) can put as many rulings out as possible, but we’re hoping that (the government) comply with orders. But it’s just to make sure (the CHRT) oversees the case and ensures that the government does what it should. So that’s why we’re hoping to push it another year because we still think there’s a lot of work to be done,” she said.

Auger doesn’t believe a date has been set for a hearing on the extension. All parties to the Jordan’s Principle action will have input, which includes the federal government.

“I think the government’s position was basically we don’t need to extend it further,” said Auger, admitting the position is ““not really” surprising to her.

“A year (extension) is a good timeline but it’s also a matter of making sure First Nations kids have the services they need but … It could take years for children to get services, so I think it’s good to have the CHRT in place so we can set up a plan for long term and make sure that we have some kind of long-term reform put in place before the CHRT is done with the case,” she said.

If and when the CHRT no longer has a hand in moving Jordan’s Principle forward, Auger says there is at least one other option if the federal government continues to be non-compliant.

“The other options are litigation. I’m not sure what kind of position we would take, but we want to make sure we see this through,” said Auger.