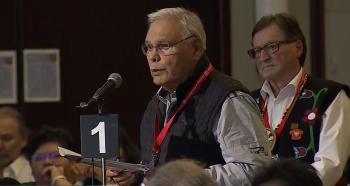 “I would have thought that the new process for recognition of our communities and our nations would be based much broader than just provincial boundaries.” — Chief Wilfred King of the Gull Bay First Nation
By Shari Narine
Local Journalism Initiative Reporter
Windspeaker.com

“We don’t have treaty rights in Newfoundland. All we have is the help of the Assembly of First Nations and the help of the Atlantic Policy Congress (of First Nations Chiefs Secretariat). If we don’t have this help, we have nothing working for us,” said Chief Misel Joe of Miawpukek Mi’kamawey Mawi’omi, who moved the charter amendment at the Special Chiefs Assembly in Ottawa on Dec. 6.

“We’re working with a Liberal government that’s supportive but, because we don’t have treaty rights we have to deal with big companies that come into our territory in a way that make us all beggars. The only way to change all of that is to have our own regional chief in Newfoundland that can work with 31,000 Mi’kmaq people,” he said.

Qalipu First Nation Chief Brendan Mitchell, who seconded the motion, said that as Prince Edward Island got its own regional chief in 2019, Newfoundland no longer wanted to share a regional chief with Nova Scotia.

The decision to add a regional chief for Newfoundland was not unanimous.

Chiefs raised concerns over how the AFN charter resolution came about and how regions in the country were being represented—or not represented—by the AFN.

This charter amendment, said chair of the charter renewal committee, Khelsilem, chair of Squamish Nation, “was not brought to our committee, unfortunately.”

That was a concern raised by Leah George Wilson, proxy for Upper Nicola Band in B.C., who said charter discussions should occur with the charter renewal committee.

She also noted that as Khelsilem had pointed out, chiefs-in-assembly had yet to approve the charter renewal committee’s terms of reference. It had come into being after July's AFN annual general meeting.

“But we’re going to vote on determining whether or not we’re going to add another region? We’ve heard a lot of discussion about perhaps changing the structure,” she said. “We need to take this one step at a time.”

Kukpi7 Judy Wilson of Neskonlith Indian Band also expressed concern about the Newfoundland amendment bypassing the committee and what had become the practise of adding regional chiefs.

“I feel bad if we think we have to stack the executive with more regional chiefs to make decisions where it should be the proper title holders making those resolutions and mandates to direct the regional chiefs,” said Kukpi7 Wilson

She pointed out that British Columbia had 204 bands, but one regional chief to represent them all.

“There is a need for full review of the entire organization, not just from a point of effectiveness,” said Buffalo. “This doesn’t truly reflect Alberta, especially treaty nations representation.”

“Instead of looking at provincial boundaries, let’s look at it realistically so that us treaty people can be represented properly,” said Regena Crowchild, proxy for Tsuut’ina Nation, who said Alberta had three treaty areas, 6, 7, and 8.

“I hate to see us when we’re moving toward self-government and self-determination and yet we’re confining ourselves to a provincial boundaries system,” Chief Wilfred King of the Gull Bay First Nation, who stressed he was not speaking against the resolution.

He added that the Anishinabek Nation people are spread throughout the country and not limited to Ontario.

“I would have thought that the new process for recognition of our communities and our nations would be based much broader than just provincial boundaries,” said King.

Almost one-third of chiefs abstained from voting on the addition of a regional chief for Newfoundland.

The vote was carried with 68 in favour and 20 opposed. Thirty-eight chiefs abstained from voting.