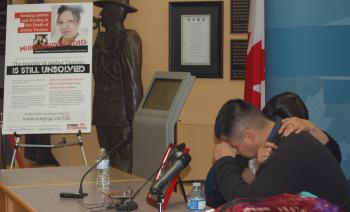 Mother Vivian Tuccaro and son Paul seek solace in each other at todays apology from the RCMP. Photo by Shari Narine

“An apology needs to be heartfelt, not just words.” —Vivian Tuccaro
By Shari Narine
Windspeaker.com Contributor 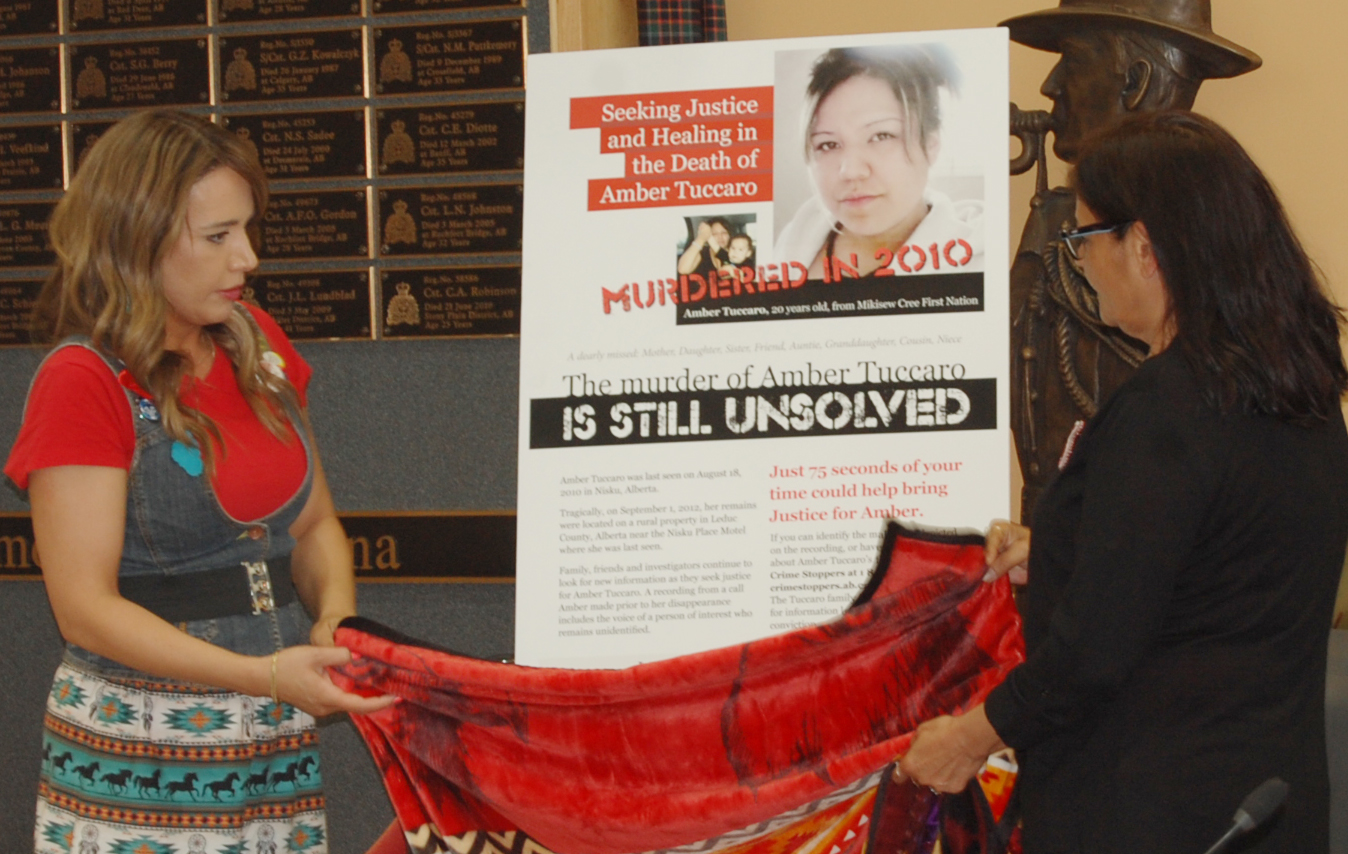 Vivian Tuccaro, the mother of Amber Tuccaro, made a mental note as she watched the RCMP commanding officers walk away from a news conference July 25.

They had just offered a public apology to Vivian and her family for the way they handled the investigation into her daughter’s disappearance and murder.

“They’re the ones apologizing, yet they can get up and walk away,” said Vivian. “An apology needs to be heartfelt, not just words.”

Amber, 20, was reported missing from Nisku in August 2010. The Mikisew Cree Nation mother had flown with her young son to Edmonton from her home in Fort McMurray.

In September 2012, her remains were found on a rural property in Leduc County. The remains of four other missing women were found in that area as well, two prior to Amber’s disappearance and two following the discovery of Amber’s remains.  All five homicides remain under investigation.

In March 2014, Vivian Tuccaro filed a complaint with the Civilian Review and Complaints Commission (CRCC) for the RCMP. It outlined the numerous ways in which she believed the Leduc RCMP, as a whole, and specific officers had botched their investigation of her missing daughter.

Last September, the Tuccaros shared portions of the report that was four-and-a-half years in the making. The commission found that the investigation into Amber’s disappearance was “deficient.”

In a news conference at K-Division headquarters in Edmonton today, Thursday July 25, Deputy Commissioner Curtis Zablocki admitted that “at the beginning of this investigation the RCMP was not the police service we strive to be.”

He said the Leduc detachment did not respond with the “urgency and care” required of a missing person’s report.

“On behalf of the RCMP, I am truly sorry,” said Zablocki.

The public apology comes almost a year after RCMP Commissioner Brenda Lucki responded to the CRCC’s report in writing, agreeing with the commission’s findings almost entirely.

The CRCC had recommended that the RCMP make a public apology.

Zablocki said the delay was due to finding an “appropriate” time with the Tuccaro family to make the public apology. He added that apologies had been made in private to the family.

Zablocki, who was accompanied by Criminal Operations Officer John Ferguson, left the news conference due to a former commitment held by Zablocki. The Tuccaro family remained to answer questions.

While Vivian said she was not willing to accept the apology and that she was still “angry …and hurt and … just messed up,” she said she was hopeful that the day’s event and her continued strength would encourage family members of other murdered or missing Indigenous women and girls to keep fighting to get answers.

She also shamed those who had information about her daughter’s death.

“And for the people who know who the killer is, you have blood on your hands,” she said.

And to the killer, she said, “You will be caught. You will. I don’t care how long it takes.”

To that end, a new poster was revealed encouraging tips to Crimestoppers.

Vivian recalled how Amber sang and danced – badly – and told her mother she would be on posters and billboards one day.

“And today there’s a new poster for her. This is not the way it’s supposed to be,” said Vivian.

“It hurts me that Amber gets the attention today when there are so many of our murdered and missing, and Amber gets a new poster out of it because the police messed up.”

Because the “police messed up,” the Tuccaro family hired legal counsel in March and are now in discussions with the RCMP about financial compensation.

Stratton would not comment on whether financial compensation from the RCMP to one wronged family could lead to similar action from other families in similar situations.

On June 28, the National Inquiry into Missing and Murdered Indigenous Women and Girls issued a statement, saying it “believes that the Tuccaro family deserves appropriate and adequate redress for the clear errors and unreasonable conduct” of the RCMP.

Amber’s brother Paul Tuccaro appeared before the inquiry in November 2017 when it stopped in Edmonton.

Zablocki said that work was being undertaken in Leduc and across the country to ensure the CRCC’s 17 recommendations were implemented and many of them had been already.

He said quality assurance was also taking place to ensure the new practises continued to be implemented.