Gathering demonstrates reconciliation through the art of writing 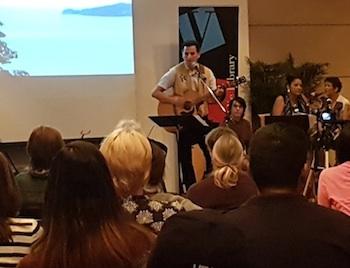 Renae Morriseau has a distinct presence, and she recently captivated one audience and sent them home with plenty of food for thought on her last night as StoryTeller in Residence for Vancouver Public Libraries’ (VPL).

For her last night she hosted Art of Reconciliation, which saw a group of writers share their views on reconciliation in Canada, with regard to Aboriginal and non-Aboriginal relations.

“It was a good fit for me when Michelle Sylliboy, who was my cohost for the evening, said she wanted to do an Aboriginal writers’ collective. What she wanted to do, and what I wanted to were similar, in getting writers to write about reconciliation,” said Morriseau.

“It was a culmination of my four-months with VPL… But it was an artistic practice I didn’t cover… the writers and novelists,” she said.

Morriseau’s background is the performing arts, and readers may recognize her from CBC’s North of 60. She has also done various theatre performances and helped produce them around the city of Vancouver. While her residency with VPL focused on her own background in performing arts, and she spent hours upon hours talking with artists and people from the general public about theatre, music, dance and even podcasts, she did not have a chance to talk with writers, so the Art of Reconciliation filled that gap for her.

While most of the guests who graced the stage were First Nations, having lived experiences to share insights about, some were not. Morriseau and Sylliboy announced at the beginning of the show that they intentionally brought in people from different backgrounds to give a diverse perspective.

Hiromi Goto was just one of these non-Aboriginal guests. Goto is Japanese-Canadian, and she read aloud a piece in which she asked herself whether she was a “good guest” or not. Acknowledging that technically, everyone is a guest in Canada, other than First Nations people, Goto then called on all Canadians to ask themselves the same thing.

Cease Wyss also shared a particularly eye-opening piece. Her poem about Jack Deighton, or “Gassy Jack,” as he was nicknamed, wowed the audience, but also gave insight into Vancouver’s true history. Deighton was married to a young Aboriginal woman from the Squamish Nation, who was 12-years-old at the time he married her. Wyss said the girl left Deighton three-years-later because of his alcoholism, which she was strongly against because she could already see the devastating effect alcohol had on her people.

Wyss’ piece is called “Ode to Madeline Deighton,” and through it Wyss shared a lesser known piece of Vancouver history. The night of the Great Fire of Vancouver in 1886, people from the Squamish Nation—women in particular—spent the evening rowing 1,200 pound canoes back and forth between their home on the North Shore and what is now known as Gastown, rescuing victims of the fire.

This was the triumph in the story— then she shared the tragic angle.

“It’s interesting how the Squamish women’s history is that they were always taking care of people here in Vancouver… I found it heartbreaking when in the 90’s I was hearing about women disappearing and the authorities not doing anything,” said Wyss, referring to Vancouver’s missing and murdered Indigenous women. Around the room, audience members lowered their heads in collective grief.

Jules Koostachin was the second last voice of the evening. Koostachin is from the Attawapiskat First Nation and her spoken word piece about her home territory—which has made headlines recently for the high number of suicides, unclean water, and poor living conditions—struck a chord with the audience. Applause for her words of sharp and painful truth roared through the room.

Morriseau’s work with VPL might have finished but the conversation around truth and reconciliation is always ongoing, she said. And she is always looking for new ways to help people express that.

“All of the stories and the work I do in the Downtown Eastside has always been stories of our land… Who are we? Where are we from? What is it we have in common? All of these stories are very much a lived experience,” said Morriseau.

“So we call it reconciliation, but it’s more about the relationship between culture. It’s about the curiosity of how people engage in the community we create,” she said. 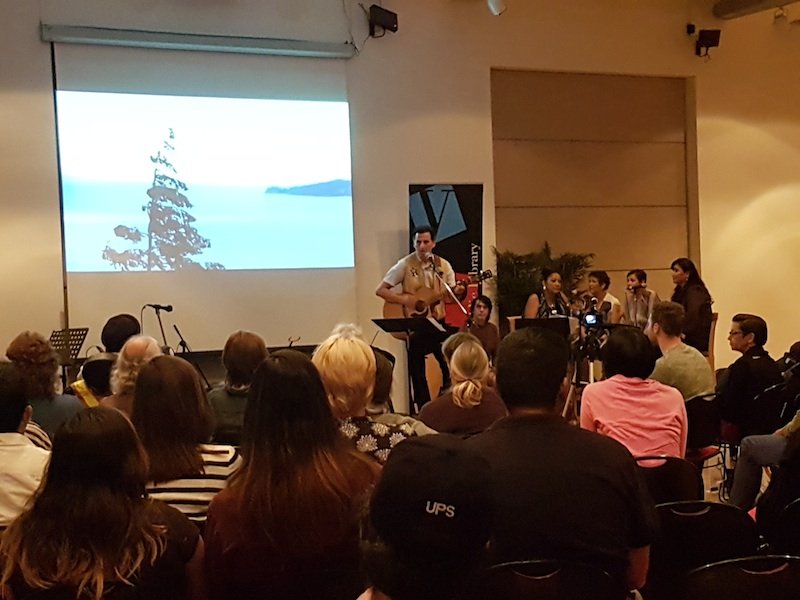 Gregory Coyes, a Metis singer-songwriter, sung the song "Harriet Nahanee" during the Art of Reconciliation event in Vancouver in June.