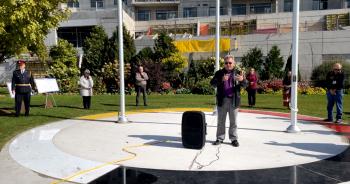 The flags of the Chippewas of Kettle & Stony Point, Aamjiwnaang, and Bkejwanong (Walpole Island) First Nations are now flying in Sarnia in recognition of the nations' relationship to the city and region of southwestern Ontario.

“We won’t get to full implementation of UNDRIP overnight (but) continuing this partnership is how we are going to get there.” — Councillor Lareina Rising of Aamjiwnaang First Nation
By Colin Graf
Local Journalism Initiative Reporter
Windspeaker.com

Three First Nations near the city of Sarnia in southwestern Ontario are now flying their flags proudly beside a city waterfront walkway trod by local residents and visitors daily. It’s a local step towards reconciliation.

The flags are from the Aamjiwnaang, Chippewas of Kettle & Stony Point, and Walpole

The flag plaza is a project of Sarnia’s United Nations Declaration of Rights of Indigenous Peoples (UNDRIP) Committee. It was installed with approval from city council.

The city established the committee more than four years ago when it resolved to implement UNDRIP at the local level, said City Councillor Brian White, who attended the flag-raising. The dedication of the flag court to the Indigenous communities is intended to “offer a space to come reflect, celebrate, to have ceremony,” said White.

Councillor Lareina Rising of Aamjiwnaang, speaking at the flag-raising dedication, said it was “very special” that Sarnia created the flag court, adding that reconciliation “is a continual journey. We won’t get to full implementation of UNDRIP overnight,” she said, but “continuing this partnership is how we are going to get there.”

Ed Gilbert of Bkejwanong, a member of the city committee, described the group as “a great thing” that will “build something that will last...with true meaning and true effect that continues to inspire and change who we are together as people.”

The committee decided the installation was needed because “we want to acknowledge these communities. To show the city’s relationship to these communities is important,” said UNDRIP Committee Chair Candace Young.

Young, a member of Kettle Point and Lambton College professor, said the idea came to the fore after members remarked that Sarnia’s original flag court along the St. Clair River that flies the Canadian and provincial flags had no First Nation representation, Young said in an interview.

In planning the plaza, committee members met with Elders from all three nations, who were consulted in order to create a “culture card” and a plaque that provided information for the wider public about Anishinabek culture, local Indigenous communities and people, the Huron Tract Treaty, to which the three nations are signatories, Indigenous culture today, language and the Anishinabe creation story, Young explains.

Two plaques were on temporary display during the flag ceremony, with permanent installation to follow later in October.

They are meant as educational tools as the Sarnia committee wants to ensure “education is at the forefront” of their work.

The advisory body was established by city council in 2017 to help develop a plan to implement the UN declaration in the city. The committee, with members from the business and not-for-profit sector, along with city councillors and First Nations and friendship centre representatives, has drafted the city’s land acknowledgement that is read before council meetings.

The group is also working on other projects including a possible community summit to help the wider public learn more about their First Nation neighbours.

Young says conducting research for the plaza was enlightening for her, as she didn’t know much about Treaty 29 beforehand. Learning the story led her to discover the actual intent behind the treaty was different than many Canadians might expect.

“I don't think many people realize that the spirit and intention of the treaty was to share the land, not surrender it,” she explained.

Future plans include landscaping using native plants sourced from the Aamjiwnaang greenhouse to be installed next spring, Young says.

The committee “endeavours to develop a plan with guidance from local Indigenous communities...to affirm and recognize the communities’ rights to self-determination, cultural identity, consultation, protection from discrimination, and inclusion,” explained White.