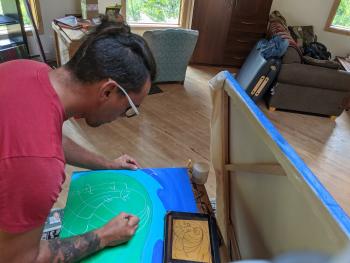 Photos of Damian John of Tl’azt’en First Nation, courtesy of the artist.

The upcoming BC Culture Days festival has been altered to continue engaging people in arts and culture in the time of COVID-19, said manager Nazanin Shoja.

“Especially right now, people are being really innovative with the projects they're developing in isolation, so [the theme] seemed very appropriate for this year,” said Shoja. “It’s a theme that’s very broad and different, but also allows for something unique.”

Acrylic and graphic painter Damian John, one of the BC Culture Days ambassadors, has embodied a spirit of intersectionality throughout his career, pursuing advocacy and healing through dialogue on reconciliation, even before the time he started calling himself a professional artist.

“Much of my life has been other things. I’ve been doing art since I was young, but then I focused on working with youth, and I was a massage therapist for about 10 years,” said John.

Describing himself as someone who was artistic all of his life, John only began to immerse himself heavily in his art within the past three years.

For a decade prior to his career change, John initiated cultural awareness training within the massage therapy industry, blending his professional knowledge with his personal experience as a member of the Tl’azt’en First Nation.

This Sept. 26, he will host an event titled ‘Exploring Reconciliation Through Creativity’ as part of his ambassador role.

John’s hope for the event, which will combine a small, socially distant gathering on his property in Ymir B.C. with a livestream for others, is that this alternative approach to reconciliation will fill in the gaps of baseline knowledge that Canadians have about the Indigenous experience.

“I feel like words are useful, but you can’t say everything with just words, and I feel like sometimes art and creative spaces can help bridge some of those gaps,” John said.

The event, which he describes as “experimental”, is a session where John will provide a one-hour lecture on some of the general history and hardships that First Nations face, followed by three hours for attendees to create art together.

“We need to have serious conversations about serious issues, and I’m hoping this to be one of those,” says John.

Participants will be encouraged to create art in any form, be it painting, sculpting, dance or otherwise. And the event is open to audiences of all ages and backgrounds, with John heavily encouraging kindness and curiosity.

“But the deep trauma of empire and colonizing, of war, rape and pillaging, can’t be fixed with just conversation,” he said.

For John, the importance of kindness as a concept in his event stems partly from his own upbringing.

Deeply influenced throughout his childhood by his First Nations identity, John spent much of his time in the community of Tache.

“It really permeated who I am, and how I see myself in the world,” John said.

As he got older, he worked with youth in his community, but says he became more cognizant of the problem of intergenerational trauma that people were struggling with.

“I got into very heavy despair after working with youth for a few years and feeling like I’d completely failed, so I basically fled my community and went off to do other things.”

John eventually channeled his energies into advocacy and awareness on the history of First Nations people for audiences, such as fellow colleagues in the massage industry, and later, into his art.

“As I dove even deeper into traumatic spaces, what has shown up now is kind of a monologue of information of the colonization, and of the empires of Britain, France and other countries, and the deep impact it still has on myself and all of my family.”

John has plans to showcase the pieces created by attendees to his Sept. 26 event for people to be able to experience their exploration of reconciliation.

With the assistance of the Nelson District Arts Council, which will provide a space for the art created, an online gallery space of digital images of each piece will be displayed following the live event.