Co-management of Castle only way to go, insists Piikani chief 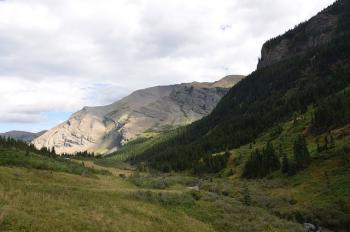 As the province moves ahead with public forums on the Castle parks management plan, there is one point Piikani Chief Stan Grier wants to make clear: his First Nation did not cede that territory and expects to be firmly involved in co-management.

“It is my assertion that the Piikani Nation has never relinquished title to that particular area prior to contact with Europeans, and contained within our treaty … they had outlined the territory of the Piikani Nation, which had included the current site of what they determined the Castle Wilderness,” he said.

Alberta Environment and Parks has scheduled public information meetings on March 10 in Pincher Creek, and March 11 in the Municipal District of Ranchlands, to “examine wider conservation and land-use issues in the southern Eastern Slopes, Castle parks and surrounding areas,” according to a government news release.

That’s all fine and good, said Grier, but the government needs to prioritize consultation with the First Nation.

“We have prior and superior rights and we know if we have to go through a court of law, and whether you want to call it an injunction, whatnot, and delay it until such time as we deal with a government that is more conducive to resolving matters in a very respectful manner, sure we have that option,” said Grier.

But he is optimistic that won’t be necessary with this government. He says he is hoping for meetings with Indigenous Relations Minister Richard Feehan and Environment and Parks Minister Shannon Phillips in the next couple of weeks to talk about a co-management approach to the Castle parks, in particular.

“We really didn’t receive any direct government-to-government, nation-to-nation consultation throughout the process. At the 11th hour prior to the actual announcement, they contacted us and invited us to be part of it,” said Grier.

What had taken place up to that point, he says, was “backdoor discussions” between Piikani Nation technical advisors and government staff.

Since the January announcement, Grier sent a letter to Piikani band members noting that they would be working with the government to "develop a working plan that will protect our traditional territory including their recent developments regarding the Castle Mountain area."

Grier notes that the area is still "very sacred" and is still used for traditional and spiritual practises, which includes collecting paints for ceremony. "The offer would be to co-manage," said Grier. "It's something we're still hammering out right now and we're very assertive over what we expect out of that."

Grier says it will not be good enough to receive "rudimentary" jobs and benefits.

"We want to ensure that we are front and centre and involved in all aspects of how management is," he said. "When we're dealing with... our treaty rights, our Aboriginal rights, our inherent rights, we're not going to compromise that. We're going to ensure that the rights of the Piikani Nation are respected and entrenched within any agreement going forward."

Consultation with the Piikani Nation is an “open-ended conversation and part of an ongoing relationship,” said Brent Wittmeier, press secretary for Phillips.

“Alberta Environment and Parks is committed to working with Piikani Nation in the development and ongoing management of the Castle Parks,” he said, noting that Phillips and Grier have been talking and will continue to talk.

In his letter to band members, Grier said that discussions with the government would include a "traditional Blackfoot designation" in the Castle Mountain area.

Wittmeier says the government has been in discussions on traditional ecological knowledge and traditional land use studies for the Castle area and will work with the Piikani Nation to identify cultural sites for access, privacy and conservation.

“This work will inform the development of plans for 2017 and beyond,” he said.

In Banff this week, the Canadian Parks conference will include discussions on Indigenous Protected Areas. IPAs would allow Indigenous groups greater voice in Canada’s park system. The government plans to post an updated draft management plan for the Castle Provincial Park and Castle Wildland Provincial Park on March 10.

The Indigenous consultation period has been extended by 60 days until May 19, while the public has until April 19 to offer input.