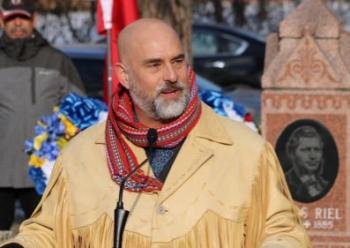 Will Goodon of the Manitoba Metis Federation

“… you're building your house on sand...” — Will Goodon
By Shari Narine
Local Journalism Initiative Reporter
Windspeaker.com

Correction: In a previous version of this article, Windspeaker.com reported that the Métis Nation of Ontario was "expelled" from the Métis National Council. That was incorrect. The MNO was issued a suspension through a letter from MNC President Clement Chartier. Our story from that time here.

A 58-page research document commissioned by the Manitoba Metis Federation (MMF) questions the information used by the Métis Nation of Ontario to expand the MNO’s citizenship in Ontario.

“We wanted a good scan of what it looked like. Like why MNO is relying on these (historical reports) to say that these are all Métis communities,” said Will Goodon, who holds the portfolio for housing and property management for the MMF.

“We’re basically saying if you're using these reports to claim your new communities, you're building your house on sand, because there's nothing here to point to that. There’s evidence to point to a connection to the First Nations community in that area, but there's no connections to point to the Métis Nation whatsoever,” said Goodon.

In 2017, the MNO and Ontario government jointly released a statement saying that after studying historical reports and based on the criteria provided by the Supreme Court of Canada in the Powley Métis hunting rights decision, that there were seven historic Métis communities in Ontario.

The Métis National Council (MNC) accepts that the Métis Homeland includes Rainy River/Lake of the Woods as the only historic Métis community in Ontario. However, the MNO and Ontario government identified Sault Ste. Marie (where the Powleys resided), Northern Lake Superior, Killarney and Georgian Bay (which comprise the Great Lakes Métis), as well as Abitibi Inland and Mattawa/Ottawa River as historic Métis communities.

The MMF document, obtained by Windspeaker.com before official release, is titled “Historic Metis Communities of Ontario: An evaluation of evidence.” It was prepared by Jennifer Adese, Darryl Leroux and Darren O’Toole who analyzed a series of reports and studies, the majority of which were produced for the Ontario Ministry of Natural Resources (OMNR), Native Affairs Unit, on the “purported existence of ‘historic Metis communities’” of Georgian Bay, Mattawa and Sault Ste. Marie.

The MMF-commissioned report “surveyed a few hundred studies cited in these reports in order to assess their merit” and found fault in the primary and secondary sources used.

“These are three really respected academics … so the language they use is almost like they’re flabbergasted that anybody could come to these conclusions based on this really flimsy overreach,” said Goodon.

The MMF research team accuses the OMNR reports of primarily relying on identifying Métis as mixed-race and not employing the MNC’s citizenship definition, which was adopted in 2002. The MNO was part of the MNC at the time of establishing that definition, but in January 2020, MNC President Clement Chartier issued a letter suspending the MNO over citizenship concerns. MNO maintains Chartier had no authority to do so, saying it’s a matter for an assembly of member organizations which has yet to be called.

The MNC definition is “a person who self-identifies as Métis, is distinct from other Aboriginal peoples, is of historic Métis Nation ancestry and who is accepted by the Métis Nation.” A homeland map shows only a small section of Ontario included under the definition.

“Their approach for establishing the existence of a historic “métis” community is whatever fits the evidence they find. Contrary to their claims, their approach is counter to social scientific methods,” writes the team.

It challenges the reports, saying information obtained from sources was presented as evidence, although often times that information could not be backed up or appeared only once in a source.

They also call out some of the researchers for identifying “mixed-race” individuals from the past and “building a community” around them.

“They were commissioned to look at the reports themselves and not to do research themselves … because there's money and time involved. And also the pandemic was going on — is still going on — at the same time (and) the research that needed to be done would have to be done out in the field. There was a few barriers to (going) that way,” said Goodon.

The MNO’s acceptance of additional Métis historic communities has opened a rift within the Métis governments.

The Métis Nation of Alberta and Métis Nation—Saskatchewan support the MNO. Representatives from all three have called out the MNC for taking unilateral action against the MNO, suspending the Ontario organization from the MNC. MNA and MN-S have also established a tripartite council with MNO while remaining part of the MNC.

The MMF has joined MNC in opposition to MNO’s additional historic Métis communities.

Recently, the issue boiled over again with the Métis Nation British Columbia, who has ousted its president Clara Morin Dal Col and replaced her outside of an election.

“The MNBC Board of Directors has been frustrated at President Morin Dal Col's principled stand calling out MNO for opening the floodgates to non-Métis people and risking the future of Louis Riel's people,” said the MNC in a statement about the BC situation.

“They cannot silence her in debate or by the ballot box. Her removal is a deliberate and calculated act to eliminate her strong voice,” the statement continues.

Goodon says the MMF research report “Historic Metis Communities of Ontario: An evaluation of evidence” hasn’t been released because of other priorities, such as housing and dealing with the coronavirus pandemic. However, he hopes to officially release the report next week in a Zoom event.