Suspended: Metis Nation of Ontario out of national council, but is the decision valid? 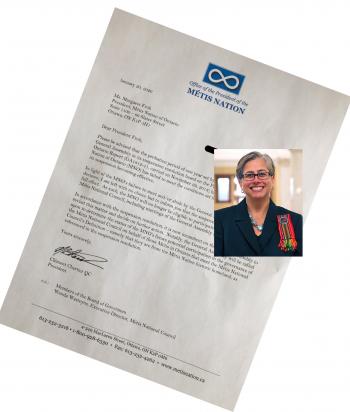 Metis Nation of Ontario President Margaret Froh with letter informing her of MNO's suspension from the Metis National Council.

"How can you put your information forward when nobody calls meetings?” —Metis Nation—Saskatchewan President Glen McCallum
By Shari Narine
Windspeaker.com Contributor

The Metis National Council has suspended the Metis Nation of Ontario. The decision delivered in a letter Jan. 20 says the action was taken as a result of the MNO not meeting conditions set out in a 2018 resolution, which put the MNO on probation for one year.

However, says MNO President Margaret Froh, national council President Clement Chartier, who signed the letter, does not have the authority to take this step unilaterally.

The suspension is “not a one-person decision. That’s a nation decision. And it’s not one that is being properly done. I don’t see it being valid in anyway,” said Froh.

She doesn’t stand alone in her condemnation of MNC’s actions.

“Somebody’s made a decision and whoever’s making that decision has no authority to suspend anybody,” said Audrey Poitras, president of Metis Nation Alberta.

“I would be very pleased if they had sent us a letter and said MNO hasn’t met the requirements under the probation, let’s call a meeting and decide whether we need to suspend them. That never happened. Two people (Chartier and MNC spokesperson David Chartrand) decided to do it. That’s not democracy in my book.”

The resolution that put the MNO on probation was adopted during the November 2018 Métis National Council General Assembly. It called out the MNO for not applying the definition of Metis, adopted by the general assembly in 2002, and attempting to extend the boundaries of the Metis homeland, which did not coincide with a map adopted at the November 2108 meeting.

The resolution stated the suspension would be lifted if the MNO brought its citizenship criteria into line with the 2002 definition and allowed its registry to be reviewed by a committee of the MNC Board of Governors.

The resolution also stated that if the MNO failed to meet the conditions within one year’s time “the General Assembly will revisit this matter at the conclusion of the probation period and decide on further action.”

No general assembly has been held since November 2018 yet further action has been taken.

“I am left with no choice but to inform you that the suspension of the MNO is now in full effect. As such, the MNO will no longer be eligible to participate in the governance of the Metis National Council, including meetings of the General Assembly and Board of Governors,” wrote Chartier.

Froh admits that all the conditions set out in the probation resolution have not been met by the MNO. Specifically, she points to the condition that requires a committee from the MNC Board of Governors to review the MNO registry of members.

“We have worked with third party experts and it’s an absolutely solid (registration) system. But no, we have not allowed outsiders to come in to look at personal confidential information of our citizens,” said Froh, adding that she considers MNC as outsiders because “they would not be our registrars or people working for our registry.”

Instead, Froh says, she had requested numerous times that she be allowed to make a presentation to the Board of Governors and to the general assembly.

“We have been arguing to create a venue and an opportunity to have this actual conversation, but our request has been denied,” she said.

Froh has not been alone in requesting a Board of Governors meeting and another general assembly. Similar requests have come separately from Poitras and Metis Nation—Saskatchewan President Glen McCallum. The three presidents have also sent joint requests.

Froh points out that MNC bylaws say that if three governing members, at least two of which are founding members, request a meeting that the chair shall call a meeting.

McCallum says when MN—S representatives moved and seconded resolutions in 2018, himself included, that called upon MNO to meet the conditions set out for their registry, it wasn’t to condemn the MNO, but to provide it with an opportunity to present its full information to the general assembly.

McCallum says he and Poitras and their respective councils got an opportunity last week in Alberta to hear about the work the MNO had undertaken in accepting historical Metis communities in Ontario and including those people on the registry.

“But nothing can be lifted if you don’t have (national) meetings. How can you put your information forward when nobody calls meetings?” he said.

Poitras would also like to see the new Metis homeland map discussed, something she says never happened when it was adopted. She says she cannot understand how the Sault Ste. Marie region is not part of the map.

Metis people received rights under Sect. 35 of Canada’s Constitution due to a Supreme Court of Canada decision when Steve and Roddy Powley were charged in 1993 for hunting a moose without a license near Sault Ste. Marie. While the official MNC map does not include that region, the Ontario map of historical Metis communities does.

Chartrand, who is serving as spokesperson for the MNC while Chartier is on a leave of absence, says MNO is at fault for not allowing the MNC committee to review its registry while at the same time approving more regions in Ontario as historical communities despite the fact they fell outside the Metis homeland map boundaries.

Opening the registry this wide, he says, allows for western Metis to be overrun by Ontario Metis. He says Statistics Canada quantifies close to 600,000 Metis in Ontario.

“(There’s) about 400,000 Metis citizens truly in the nation and they’re all mostly Prairie,” he said.

Chartrand also worries that Ontario’s definition of Metis could lead to a pan-Aboriginal approach and open the door to the Indigenized Metis of Quebec, the Maritimes and eastern Ontario.

“This is even more dangerous because these are people trying to be us, trying to disguise themselves by coming under that guise… the scary part is it’s going to have generational-impact effects,” he said.

“Some people are conflating what we have done with the Metis Nation of Ontario with this whole eastern self-indigenization movement and nothing could be further from the truth,” said Froh, who adds she is “absolutely outraged” by the people who are falsely claiming Metis ancestry.

Froh says she is not concerned about MNO being cut off from federal funding if it is cut out of MNC proceedings. She says a self-government agreement signed with Ottawa last June will allow federal dollars to flow directly to MNO.