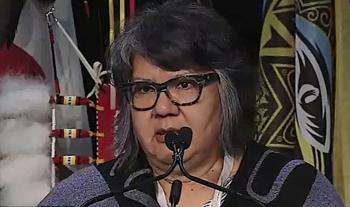 National Action Plan “must be distinctions-based, it must be First Nation women-led, and most of all, it has to reflect the voice of the survivors and family members of MMIWG.” — Ontario Regional Chief RoseAnne Archibald
By Shari Narine
Windspeaker.com Contributor

Chiefs-in-Assembly have given the Trudeau government until Sept. 6 to “respond” to the final report delivered by the National Inquiry into Murdered and Missing Indigenous Women and Girls.

However, the “friendly amendment” to Resolution 21, Implementation of Recommendations from the National Inquiry into Murdered and Missing Indigenous Women and Girls, was short on detail and offered no definition as to what that response should look like.

Prime Minister Justin Trudeau accepted the report on June 3, when it was delivered. His office released a statement then saying it would “conduct a thorough review” of the report.

The AFN resolution was discussed and passed by consensus by chiefs and their proxies on July 24, the second full day of the Assembly of First Nations annual general assembly in Fredericton.

The first Call for Justice in the report states, “We call upon federal, provincial, territorial, municipal, and Indigenous governments … in partnership with Indigenous Peoples, to develop and implement a National Action Plan to address violence against Indigenous women, girls, and (two spirited, (lesbian, gay, bisexual, trans, queer, questioning, intersex and asexual) people.”

Ontario Regional Chief RoseAnne Archibald, who is the executive portfolio holder on MMIWG, re-iterated that need.

“We hear that the federal government has committed to developing and implementing a national action plan.... The process for developing and implementing the national action plan, however, must not only be dictated by governments alone. It must be distinctions-based, it must be First Nation women-led, and most of all, it has to reflect the voice of the survivors and family members of MMIWG,” said Archibald.

However, Julie McGregor, legal counsel for the AFN’s women council, made it clear that wading through the two-volume report, the two supplementary reports, and the 231 calls to justice will be “a lot of work.”

“It’s a long report, it’s a very good report and it also needs a lot of technical work to get through it,” said McGregor.

She said the women’s council was holding “very technical” meetings to go through the recommendations.

While this work is ongoing, Archibald said that action needed to be taken now.

“The AFN has consistently stated that there are immediate steps that the government can take now to ensure the safety and security of our women and girls and so therefore it’s vitally important, chiefs, that the federal and provincial governments and territorial governments take urgent action to implement the national inquiry’s recommendations by utilizing this process that will be led by our women and by the two-spirited LGBTQQIA community,” she said. 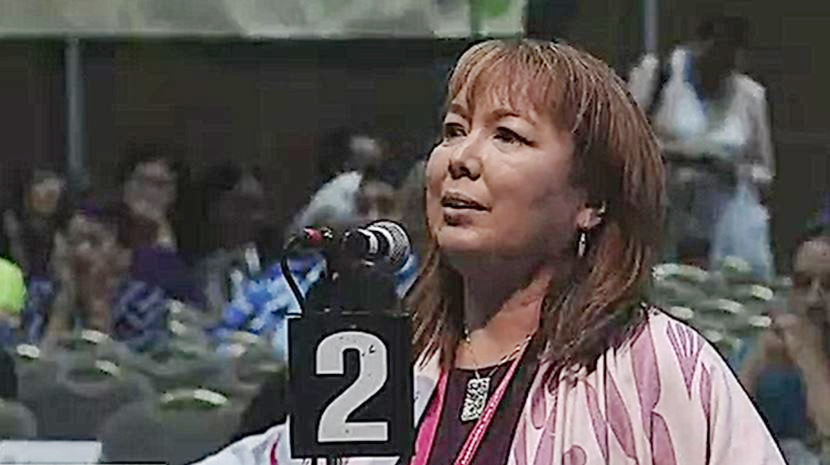 Francyne Joe, proxy for Shackan First Nation, also talked about the need to move on from more studies and to start taking action.

“It’s really important that we make sure that these recommendations be implemented sooner rather than later…. We need to hold this government accountable now,” she said.

“As AFN, we need to remind the other international organizations who are also dealing with similar situations that they can see what Canada has done for our Indigenous women and girls, but we as family members, as community members, we need to start taking action and looking after our women and girls now.”

The resolution called for not only the implementation of the recommendations from the national inquiry but also recommendations “coming directly from Indigenous, front-line, grassroots, and women’s organizations.” It also called for the AFN to work directly with these groups.

“As the portfolio holder and as a woman, this is a great urgent need for us and … I will do everything that I can to keep moving this file forward and to bring justice to those families and to have the people that have gone missing and who have been murdered that they know, that at the end of it, that there is a purpose that we’re going to make the world a better place for women and we’re not going to stop until we get to that destination,” said Archibald.