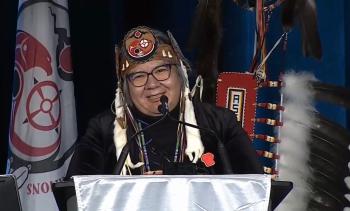 There will be no repeat of the tension and dysfunction of the July Special Chiefs Assembly (SCA) this time around, promised Assembly of First Nations National Chief RoseAnne Archibald.

“There are items we need to move forward on and we can’t spend another minute, never mind a chiefs assembly, in turmoil. Our people are watching and they’re counting on us to create much needed positive and transformational change that will make their lives better,” said Archibald in her opening address this morning on the first day of the winter SCA.

Last July, with Archibald suspended by the executive council prior the annual general assembly in Vancouver, the first day of the three-day meeting was spent reinstating Archibald as national chief and the remainder was spent with infighting. Few resolutions were passed.

Archibald and the regional chiefs were chastised by a number of presenters, including the youth, for “squabbling” amongst themselves and putting their political ambitions first.

“In the months since the AGA I’ve made every effort to heal and create harmony in the working relationships I have with regional chiefs,” said Archibald, and “we’ve overcome many barriers and difficult moments since July.”

Yesterday, she said, the executive committee met and committed to demonstrate to chiefs that “we’re supporting each other, that we are getting to work, and we are serious about that work, with a plan to walk the healing path forward.”

Archibald said that the events that led up to and occurred during last July’s AGA were an “example of the reverberations that continue today from those institutions (of assimilation and genocide).”

She said every First Nation person, herself included, are intergenerational trauma survivors.

Archibald said more work would be needed to allow the executive to move forward together. To further that work, she announced that Murray Sinclair, former senator and chair of the Truth and Reconciliation Commission on the legacy of Indian residential schools, will be assisting the executive with conflict resolution and mediation in the new year.

She said Sinclair would help them avoid unhealthy situations and return to productive dialogue and listening.

This assembly, said Archibald, needed to focus its energy on advocating for their citizens.

Rosalie LaBillois, of the youth council, encouraged chiefs to work together in the limited time the three days provided in order to complete the required work.

“Put away the animosity and egos,” she said. “An active commitment is needed to pass the resolutions that directly impact our nations in our everyday life. So many communities and agencies are relying on us to carry this work forward.”

LaBillois, a member of Eel River Bar First Nation, told chiefs they needed to be deliberate and get down to work.

“Show those who are watching across the country and beyond that we can work together for the betterment of our children, our youth and all of our relations that are dependent upon you. We are here for the love of our people and the welfare of our communities. We must not lose sight of that,” she said.