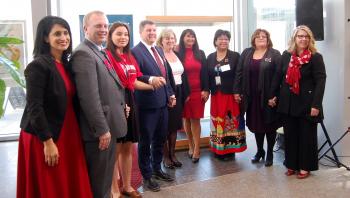 For Josie Nepinak, her new appointment to Alberta’s Joint Working Group on Missing and Murdered Indigenous Women and Girls is highly personal and emotional.

“We all have our story to tell. I have lost two family members … in this epidemic of violence against Indigenous women,” said Nepinak, who is the executive director of Awo Taan Healing Lodge Society in Calgary.

“For the past several decades I and many others have worked to bring awareness and education and prevention and saving lives on the issue of violence on Indigenous women in our communities,” said Nepinak; “from coast to coast, to the north, to the south. We work together hand in hand, community members, grassroots people and now a wonderful opportunity to work with our government.”

A cross-ministry approach will see Indigenous Relations, Justice and Solicitor General, and Culture, Multiculturalism and Status of Women liaise with the working group.

The joint working group has a one-year mandate in which it will:

advise on options to address issues of violence and the calls of justice outlined by the National Inquiry into Murdered and Missing Indigenous Women and Girls, which was delivered last June;

and recommend actions to bring together communities, the Alberta government and the private sector to stem violence against Indigenous women and girls.

Wilson, who was in Ottawa to accept the final report, said he committed at that time “that our government would take action and today we’re following through with that action.”

Alberta has the second highest rate of missing and murdered Indigenous women in Canada.

Wilson could not offer any details on the funding model for the working group.  He said there was money set aside in the budget for women’s initiatives, and that he had topped it up by $200,000 for this year.

The first meeting has been scheduled, said Nepinak, noting that the working group will “review and analyze” the national inquiry’s report, as well as talk to Albertans to determine priorities and what actions can be taken to meet those priorities.

One of the issues Wilson will ask the committee to look at is the impact of resource development camps. It was an area of concern noted by the national inquiry, which called for “the federal, provincial, and territorial governments to fund further inquiries and studies in order to better understand the relationship between resource extraction and other development projects and violence against Indigenous women, girls, and 2SLGBTQQIA people.”

“What we’re looking to do is to do action, not just symbolic action,” said Wilson, who pointed out that the one-year mandate for the group could be extended.

MLA Richard Feehan, who serves as the NDP’s Indigenous Relations critic, said he supported the working group and was pleased with the Indigenous women who were appointed to it.

However, he questioned the government’s delay in appointing the group as the national inquiry’s final report had been delivered nine months ago.

He also said that the working group should take action before the end of its mandate.

“I don’t think things need to wait until next year. I would suspect that we should see some of these calls for justice implemented within the next two months,” he said.