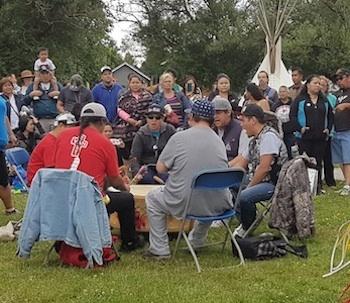 The day started with a free pancake breakfast at VAFCS, graced by guest speakers and Indigenous musicians, then a walk from there to Trout Lake, where vendors, Aboriginal organizations from the around the city, more musicians and even canoe rides, courtesy of the Tseil—Waututh Nation, awaited the crowd.

“For the walk, this year we had the Red Cross in the front, and the Armed Forces took some of the Elders that wouldn’t be able to walk it. Then we had the drummers… the Battered Women’s Society was drumming with the walkers behind them,” said Michelle Wright, Community Resource Program Coordinator for VAFCS.

The walk included an estimated 300 participants and it was nearly four kilometres long, said Wright. But the miles put on and the energy expended were a small price to pay for the feeling of such solidarity between Vancouver’s diverse Indigenous people, which is the main reason VAFCS even organizes it in the first place, she said.

“It brings the community together… especially with the Downtown Eastside. A lot of urban Aboriginal people tend to get scattered. It gives us a sense of community and a sense of pride, and it’s for all nations,” she said, adding that they even had Vancouver Mayor Gregor Robertson and MLA Melanie Mark, the first First Nations woman to be elected into the BC legislature, show up to offer moral support and a pep talk during breakfast.

And one particularly impressive morning guest was the musical ensemble Sister Clan. Sister Clan is made of five sisters, Willow, Leila, Bernie, Eliza and Jaylene Coutts, all between the ages of five and 14. Their mother is well-known pop soul singer Fara Palmer. The sisters enchanted pancake breakfast-goers first by singing traditional Cree and Secwepem’c songs, then launched into their own contemporary creations.

Follow-up acts were singer-songwriter Candace Curr, and The Kwhlii Gibaygum Nisga’a Traditional Dancers, both of which brought good energy to the room, said Wright.

“Everybody seemed to be enjoying themselves, and everything went up without a hitch. We had more than enough room for our Elders to get a ride to Trout Lake… We always take good care of our Elders. They were served bannock first at Trout Lake and had their own space to enjoy the show,” she said.

Freida Gladue works for the Vancouver Aboriginal Child and Family Services Society. She had a large hand in organizing the events for the day, and was excited to see everything unfold as it did.

“Our performers are representative of people from the community that come from diverse backgrounds. We had some artists that were also two-spirited, that are contemporary, that also play traditional music... And we had some that were really well-seasoned, and new artists that are just trying to break through,” she said.

While Gladue enjoyed the day, she agreed with MLA Melanie Mark, who recently made it known she believes National Aboriginal Day shouldn’t be just an unofficial holiday for those wishing to celebrate, but should become a statutory holiday by B.C. law.

This year, the special day falling on a Tuesday—a workday for many people in the city—meant the turnout was lower than Gladue would have liked. But she’s still grateful to everyone who did come out, or helped plan or volunteered for it.

“Some of the comments that I heard were that people enjoyed the variety, but that there was still not enough bannock… There never seems to be enough bannock,” she said, laughing.

“But I’m hopeful this day will bring understanding of the diversity within our community, and bring about dialogues where others will understand each other a little bit more,” she said.

Haisla Collins was one of the patrons attending the event for fun. She is of mixed Aboriginal descent, including Tsimshian, Gitxsan, and Nisga’a, as well as some Scottish. Having lived in Vancouver all her life, she has been attending the Trout Lake National Aboriginal Day event on-and-off for the past 20-years.

Collins loves the art, and running into people she knows, but feels it’s also a good way to keep the Aboriginal community in Vancouver connected.

“National Aboriginal Day serves to renew the pride of the Indigenous community of Vancouver. And since Vancouver is the inter-urban (off-reserve) Aboriginal capital of Canada, it is important for the community to stay strong,” she said. 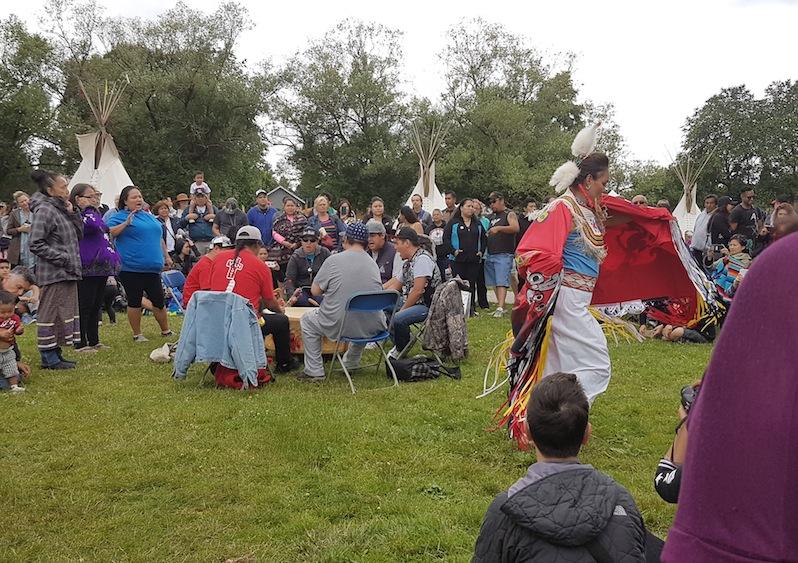