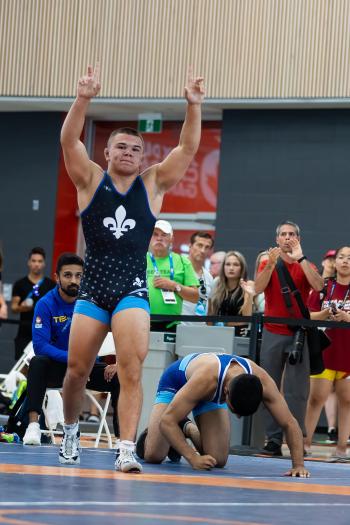 “I thought the list of people who had won before was pretty impressive. There was a lot of Manitobans, which I’m proud of.” — Connor Church
By Sam Laskaris
Local Journalism Initiative Reporter
Windspeaker.com

But instead of yearning for an MMA career now, Church, a 19-year-old Métis from Winnipeg, is instead working to reach the highest levels in wrestling.

Church has already achieved some success in the sport.

His accolades include being selected as the male recipient for this year’s Tom Longboat Award.

Leah Miller, an 18-year-old rower who is a member of Pimicikamak Cree Nation in Manitoba, was chosen as the female winner.

The Tom Longboat Awards, first awarded in 1951, are annually presented to the top Indigenous athletes in Canada for their outstanding achievements.

Church and Miller were announced as the 2022 recipients in conjunction with Canada’s Sports Hall of Fame induction ceremonies held Oct. 6 in Toronto.

Church can, in part, thank a former Olympian for helping him switch focus to another sport.

As a teen boxer he had considerable success having fought about 50 bouts and losing only three of them.

“I’ve always been doing combat sports,” Church said. “And I was really heavily into boxing. And I wanted to be a professional MMA fighter. That was my goal when I was like 14-15ish.”

He then decided to try and make the Manitoba provincial wrestling squad for the 2019 Western Canada Summer Games in Swift Current, Sask., a goal he was able to fulfil.

Church met Leah Ferguson, a wrestler who had represented Canada at the 2012 Olympics, at those Games.

“She talked to me a little bit and said ‘You know, you’re kind of talented,’” Church said of his initial meeting with Ferguson. “That kind of convinced me to give wrestling a real shot and really train to compete, strictly in wrestling. From there, that’s when my career really took off. I really cut back on all my other combat sports and just focused on wrestling.”

Church moved from his hometown of Winnipeg to Montreal in August 2021 to train with a prestigious Quebec wrestling club called Montreal YW-YMHA.

And now he’s a first-year Marketing student at Montreal’s Concordia University. Members of the university wrestling program train alongside the Montreal club members.

Church will represent Concordia in his first university meet on Oct. 30 at McMaster University in Hamilton, Ont.

“It definitely meant a lot,” he said. “I feel like it is pretty prestigious thing. It’s been the longest (Indigenous) award in Canada so that means a lot.”

Church was unavailable to attend the Toronto ceremony last week as he was in Puerto Rico participating in the Standard Cup, an international meet.

He won all three of his matches at the event to capture the gold medal in the 79-kilogram category.

The Tom Longboat Awards are named after the legendary Onondaga runner from Six Nations. He was considered one of the top long-distance runners in the world in the early 1900s.

Longboat won the 1907 Boston Marathon and also represented Canada at the 1908 Olympics in London, England.

Church said he was vaguely familiar of Longboat before he won his award.

“I had heard about him before,” he said. “But I read more about him afterwards.”

Church said his award took on even greater meaning for himself upon learning more about Longboat.

“(It was interesting to discover) just who Tom Longboat was as a person,” he said. “To see his athletic accomplishments and then have an award dedicated to him, I think that’s really cool and important.”

“I thought the list of people who had won before was pretty impressive,” Church said. “There was a lot of Manitobans, which I’m proud of.”

Like this year, both of the 2021 winners, curler Kerri Einarson and hockey player Conner Roulette, are also from Manitoba.

“I think we have a really big Indigenous population,” Church said, explaining the recent winners from the province. “So we have more chances.”

Church is hoping to continue participating in his sport for a long time.

“I want to take wrestling as far as I can,” he said. “Right now all I can imagine is wrestling in my future. I can’t even think of something else.”

Church competed in his first world championship this past August in Sofia, Bulgaria. He placed 17th in his category at that world under-20 competition.

Church is hoping to eventually win a medal at a world meet. And he’d love to represent Canada at a future Olympics.

“One of the biggest honours for an athlete is being able to attend the Olympics,” he said. “That’s really a big goal of mine.”