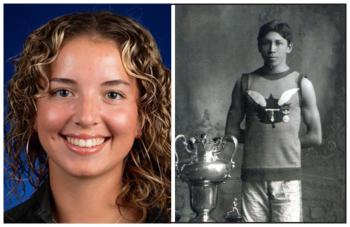 Rower Leah Miller is this year's female winner of the Tom Longboat Award. Tom Longboat (right) was considered one of the world’s fastest long-distance runners in his prime.

“From the moment I stepped in the boat I loved it. I just liked the feeling of when you get the boat moving well and the atmosphere of being on the water.” — Leah Miller
By Sam Laskaris
Local Journalism Initiative Reporter
Windspeaker.com

Leah Miller was simply looking for another sport to participate in a half-dozen years ago.

Miller, who was 12 at the time and already playing volleyball, enrolled in a Learn To Row program in Winnipeg.

Fast forward to 2022 and Miller, a member of Pimicikamak Cree Nation in Manitoba, has become an elite rower.

In fact, she’s now a first-year student at the University of Michigan on an athletic scholarship for her rowing prowess.

Plus, she now has aspirations to represent Canada at the Olympic Games.

And Miller, who is 18, has been announced as this year’s female recipient of the Tom Longboat Award.

Connor Church, a 19-year-old Métis wrestler from Winnipeg, was chosen as the male recipient.

The Tom Longboat Awards, established in 1951, annually honour Indigenous athletes in Canada for their outstanding achievements.

Miller and Church were announced as this year’s winners in conjunction with Canada’s Sports Hall of Fame induction ceremonies held last Thursday, Oct. 6, in Toronto.

Eight individuals and two teams were inducted into the national sports hall this year.

“From the moment I stepped in the boat I loved it. I just liked the feeling of when you get the boat moving well and the atmosphere of being on the water,” Miller said.

While growing up, Miller represented the Winnipeg Rowing Club in various regattas.

A career highlight occurred earlier this year as she cracked the Canadian junior national team (19 and under). Her fours crews placed 11th in its race at the world junior championships in Varese, Italy.

“My goal for next summer is to make the (Canadian) under-23 team,” Miller said.

For now though, she is getting adjusted to being a first-year university student. She is studying Biology.

A handful of other NCAA Division 1 schools offered Miller an athletic scholarship.

“When I went on my official visit here (at U of Michigan), I loved the campus and the academics at the school,” Miller said. “And the team is really good and I wanted to be a part of that.”

Though Michigan’s rowing team has a spring competition season, Miller and her teammates have a rigorous training schedule, working out six days a week. Team members have Mondays off.

But Miller said Michigan athletes train sometimes three times per day. Some of those sessions are in the gym working on weights.

“I’m pretty used to how busy it is,” said Miller, a graduate of Winnipeg’s Mennonite Brethren Institute Collegiate.

Miller is one of four Canadians on the Michigan women’s rowing squad.

She is hoping to win various NCAA national championship races while at Michigan, starting as early as next spring.

But it probably won’t be until the new year when team officials decide on roster positions for 2023 races. Miller will have to wait a bit before learning whether she’ll represent the school in races featuring crews of fours or eights.

What Miller does know, however, is that she was thrilled to be chosen as the female recipient of this year’s Tom Longboat Award.

“It means everything to me,” she said. “It’s such a huge honour. I was very happy to win it.”

Miller attended the Toronto ceremony with her mother Paula, who is a member of Pimicikamak Cree Nation, and her father Donald, who is Métis.

The Tom Longboat Awards are named after the legendary Onondaga runner from Six Nations in Ontario.

Longboat, who died in 1949 at the age of 62, was considered one of the world’s fastest long-distance runners in his prime.

He won the 1907 Boston Marathon and competed in the men’s marathon race at the 1908 Summer Olympics in London, England.