Indigenous netminder is in the hunt for the Hobey Baker Award 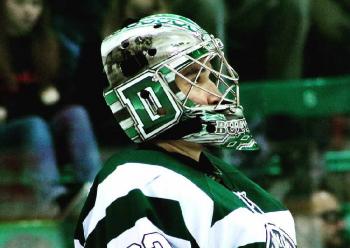 Devin Buffalo is an NCAA hockey player for the Ivy League school Dartmouth College in the U.S. This means he has worked incredibly hard to have both his grades and his hockey skills as a netminder meet the college’s high expectations. And he continues to work hard because the school requires honor roll grades to stay.

Buffalo is, right now, in the running for the Hobey Baker Award. The prestigious college hockey award is similar to the Heisman in college football, well-known and coveted.

Buffalo comes from the small First Nations community of Maskwacis, and calls nearby Wetaskiwin home. Both are in rural Alberta. The key to Buffalo’s success, he said, has been living in the moment, focusing on each step as it comes before him, and trying to prove negative stereotypes about Indigenous people are wrong.

“I always had that on my mind, even when I was young. I’ve dealt with racism in hockey, and along the way, so I think it was a motivator to prove what Native people can do,” he said.

“Making the team is hard… You have to really show yourself. Coaches don’t want Native hockey players because they’ve heard they’re lazy or have bad attitudes. Or they’ve dealt with that before. So, going into try-outs, you know you have to prove yourself even more than everyone else,” he said.

Buffalo recalls one particularly shocking incident of racism during his years in hockey. While he has had many members of the crowd yell racial slurs at him, on one occasion it was a board member for the opposing team. He was caught yelling things that intended to hurt Buffalo’s performance.

“This was the first time I received a letter from a person on the board of one of these Junior teams… Someone caught him saying ‘Go back to the reserve, Buffalo.’ They sent me a letter personally apologizing, and saying what happened and how they dealt with it.” The director was suspended from the rink for the rest of the year.

A key piece of the Hobey Baker Award criteria is that it is based on character, and not just on performance in hockey. Buffalo has spent much of his spare time volunteering with youth in various settings, including hockey camps back home.

This volunteer work had him recently nominated for the Hockey Humanitarian Award. He was a semi-finalist of 11, male and female nominees, but he didn’t make it to the final five. Buffalo is okay with that because he’s not volunteering to build his reputation.

“The volunteer stuff is to connect with the youth. So they can get to know me, and I can show them they can go to an Ivy League school and play hockey wherever they want,” said Buffalo.

Buffalo has also volunteered for the World Indigenous Games, the North American Indigenous Games, and the Alberta Indigenous games. His Dartmouth study major is Government, but he isn’t sure if he will use it directly, because hockey is his first love, he said.

Buffalo’s father Pat believes his son is more than deserving of both the Humanitarian and the Hobey Baker awards. He says his son has always shown a strong work ethic and strong morals since he was very young. And he does it with pride, not arrogance, he said. Pat said Devin has a real effect on the youth.

“The last trip I made to Dartmouth, there were three kids behind the net. And these kids are there every game. They came up with this buffalo… they drew a buffalo, and they each carried a part of the buffalo to make a whole.

“Devin said they’ve been there every year, and last year he gave them his goalie stick,” said Pat, adding his son said the three young boys, who range in age from five to 10, lit up with joy when he did this.

“At every level of hockey, he’s always there, doing things for the kids... I know he has influenced some boys to go to university, instead of the WHL route. Not just here, but across the country. People are watching him, and realizing he’s blazed a trail that others can follow,” he said.

To learn more about the Hobey Baker Award, or to place your vote, go to: https://www.facebook.com/TheHobey/