Bernelda Wheeler: A trailblazer throughout life 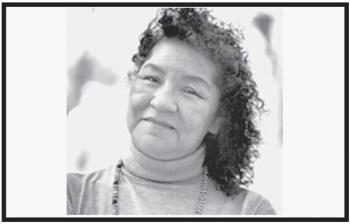 She will be remembered as a woman who cared deeply for her people, and who worked hard on their behalf.
By Cheryl Petten
Originally published in 2005

The world lost one of its great storytellers on Sept. 10, 2005 when Bernelda Wheeler passed away after a lengthy battle with cancer.

She began her life on April 8, 1937 on Muskopetung First Nation in southeastern Saskatchewan, one of six children of Cree, Assiniboine and Saulteaux heritage, born to Colin and Clara Pratt of George Gordon First Nation.

Bernelda spent her early years on the family farm on the Gordon reserve then, in 1946, the family left Saskatchewan to settle in northern Manitoba. Bernelda attended the Birtle and Brandon residential schools in that province, where she suffered both physical and emotional abuse. But she survived those experiences and went on to attend high school in Churchill. In 1955 she became the first member of her family to graduate.

Bernelda hoped for a career in medicine, and enrolled in pre-med at the University of Manitoba, but was forced to leave the university because of lack of funding.

In 1954, at the age of 17, she started work as a radio announcer for CFHC in Churchill, part of the CBC northern service. She followed that with positions as a print journalist, but by the late 1960s she found herself in radio again, this time with a much larger listening audience.

From 1972 until 1982 she worked as host, producer and journalist on CBC's national program Our Native Land, created as a national media forum for the opinions of Aboriginal people from across Canada. For many she was the first Aboriginal person they'd ever heard on the radio.

While she is most known for her time in the media as a voice on the radio, Bernelda got a chance to put a face to that voice when she added actor to her long list of accomplishments. She appeared on stage for the first time in 1983, and never looked back. As a stage actor she is probably best known for her work in Tomson Highway's The Rez Sisters.

Bernelda also worked in movies and television. She appeared in the 1998 mini-series Big Bear, written by Gil Cardinal and Rudy Wiebe, and the 1999 movie The Strange Case of Bunny Weequod, written by Drew Hayden Taylor. In 2001, she was in Christmas at Wapos Bay, written by Dennis Jackson and Bernelda's son, Jordan, and was in Now and Forever in 2002.

Bernelda made a name for herself as a children's author. In 1984, she attended a Native writers' workshop sponsored by the Native education branch of Manitoba Education. During the workshop she wrote three books—A  Friend Called 'Chum', I Can't Have Bannock But the Beaver has a Dam, and Where Did You Get Your Moccasins?, which earned her a Toronto Children's Book Award and a Children's Choice Award. The books can still be found on the required reading lists of school districts across the country and beyond. The book Where Did You Get Your Moccasins is listed on the American-based National Education Association's list of 50 multicultural books every child should read.

Bernelda was also known for her social activism, for always working hard to improve things for her people. She was one of the founding members of the National Association of Friendship Centres, and was involved in Grandmothers for Justice, a grassroots organization that works to draw public attention to injustice. She also worked with Aboriginal Consulting Services in Saskatoon, taking part in Aboriginal awareness training seminars. Bernelda used her personal experiences and storytelling abilities to educate participants in those seminars about residential schools. Her stories, told with both skill and compassion, never failed to elicit strong emotional responses from those hearing her speak.

Bernelda was on staff at Eagle Feather News in Saskatoon. For a time she was contributing three columns to the monthly Aboriginal paper—Introspection, Tapway and Ekitwecik—drawing on the vast amount of information and experiences she'd amassed throughout her personal and professional life and sharing it with her readers. But as her health began to deteriorate, she was forced to cut her workload, though she continued to contribute as long as she could.

Her efforts and accomplishments over the years didn't go unnoticed. Her work on Our Native Land earned her two ACTRA nominations. In 1982, she received a special award for Native broadcasting, and named the First Lady of Native Broadcasting.

In 2002, she was named Citizen of the Year at the Federation of Saskatchewan Indian Nations’ annual Circle of Honour awards gala, and in early 2005, the Elizabeth Frye Society of Saskatchewan named her one of its Rebels with a Cause in recognition of her lifelong commitment to activism and her role as a communicator and role model for First Nations women across the country.

Just days before her passing Bernelda was told she had been chosen to be one of the first recipients of a Lifetime Achievement Award as part of the second annual Anskhok Aboriginal Literacy Festival held in Saskatoon. The letter to Bernelda said she had been chosen for the honor to recognize her contribution to Aboriginal literature, her professionalism and leadership as a writer, and her dedication to her craft and to her community.

Throughout her lifetime, Bernelda served as a role model and inspiration. More than a few of today's Aboriginal journalists chose that career because of her. Many have been entertained and educated by her written words and her performances on stage and screen. Many have been touched by her stories.

She has also left a living legacy—her children. Dr. Winona Wheeler and Jordan Wheeler who, like their mother, have taken on the roles of educators and storytellers.

Bernelda may be gone, but what she accomplished in the time she was here will continue to educate, entertain and inspire those that remain.