Percy Tuesday, “The Reverend”, influenced through music and traditional teachings 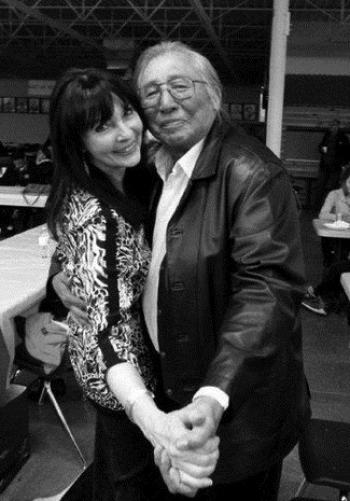 Percy Tuesday didn’t claim to be an Elder, partly because he thought the spiritual persona conflicted with his earlier, rambunctious days of playing in honky tonk bars on Winnipeg’s Main Street.

But perhaps more than anything, he was too humble to assume the title.

“The thing is, everyone called him an Elder,” insisted friend David MacLeod. “He had charisma. He was generous. He had the kind of personality people gravitated to. And he had that special gift of humility – for that you had to love the man even more.”

Though he had 45 years in the music industry, his unassuming nature was evident when long-time partner Linda Wolch announced she was planning to gift him a Celebration of Life, Love and Friendship.

“When we talked about it, he looked at me and said ‘what if nobody comes?’,” Wolch said.

Tuesday needn’t have had a moment’s doubt as hundreds of “who’s who” in music crowded into the Indian and Métis Friendship Centre for the occasion, the place where it all began in the late 60’s for Tuesday and his Feathermen Band.

The likes of Billy Joe Green, the C-Weed Band, and members of Red Wine were on-hand to speak with the icon and hear him play in public for the last time.

To the sound of a drum song, family, friends, and fans watched as a blanket was placed on Tuesday’s shoulders “and he knew he had the love and caring of his community around him,” said MacLeod.

Tears flowed as people lined up to hug him, realizing they wouldn’t hear The Reverend’s signature version of Freddy Fender’s “Wasted Days and Wasted Nights” or “Stagg’r Lee” again.

On May 26, one month later, the 72-year-old Tuesday succumbed to leukemia. He was taken back to his home, Big Grassy River Ojibway Nation, for burial.

According to Wolch, the love-filled send-off meant a lot to the man who doted on his family and friends, and who spent much of his boyhood isolated from his own community.

“He was in and out of hospitals with skin tuberculosis as a child, and I know he was transported home alone on a train at one point with just a card hanging around his neck to say where he was going. His parents hadn’t been notified so he waited alone at that empty train station for quite a while.”
There were also 12 years of residential school to endure. He was shuffled around to six different institutions, emerging ill-prepared to deal with the outside world when finally released.

In a 2006 interview, Tuesday said he went years without being sober and admitted his music and drinking took a toll on his family. But by 1986 he was spending time with his own Elders, and most importantly, learned about the Medicine Wheel. He was seven years sober by the time he learned about balancing his life with the teaching, and soon realized he needed to go deeper. At that point, he had just abstained from drinking but hadn’t gotten to the root of his addiction.

After intensive work on himself, he was finally able to forgive himself for the pain he caused those close to him.

“That’s what is so important. You got to forgive yourself first and that’s not as easy as it sounds.”

What he learned of forgiveness and healing, he shared as an addictions counsellor on the Big Grassy River Ojibway First Nation. It was a calling that saw him drive four hours from Winnipeg, where he lived, to the Northwestern Ontario community.

He said the work could be draining, but he saw no other way of life for himself, and he would continue doing it until he died.

His particular medicine wheel teaching was a compilation of concepts he had learned from a number of Elders, said Wolch, and with it he helped many a young person get back on the good, red road.

From his Elders he gained his Anishnabe name, Ogimaawigaabaw Biziw Nindootem, and he often said it was important for him to be able to introduce himself in his language and identify his clan.

Tuesday met Wolch at Winnipeg’s Folklorama First Nations Pavilion in 1996. She saw his gifts with fresh eyes, and gently encouraged him to assume a teaching role in later life and undertake other accomplishments.

Together, they founded the Chief Big Bear Gathering at Stony Mountain and Rockwood Institutions in 1998, to let the inmates know people on the outside cared about them and that there was hope. The event was held annually for 10 years.

When Tuesday lost his ability to sing and play in 2008 after suffering a stroke, Wolch knew music was his soul, and took his beloved guitar to the hospital to prop it up in his room.

“Seeing it sitting there brought him back,” she said.

Off-stage, Tuesday was soft-spoken, but he unleashed The Reverend under the spotlights, playing mainly classic country and blues, and entertaining audiences with his dry wit. He was once scheduled to play with Johnny Cash at Stony Mountain Institution, but the show was cancelled at the last minute due to an illness in Cash’s family.

Inducted into the Manitoba Aboriginal Music Hall of Fame in September 2013 at the Native Communications Inc. (NCI) Jam, Tuesday played a memorable set in the historic Pantages Playhouse Theatre in Winnipeg. In accepting, he was sure to attribute his success to “having a good band to back him.”

Son Jason, also a guitarist, often shared the stage with his dad and said, by watching his father, he learned some of his first lessons about being a musician.

There is a good video of Percy Tuesday on NCI Jam on YouTube: See https://www.youtube.com/watch?v=rNeHFxiL2Ys