Jimmy Herman was a regular Joe 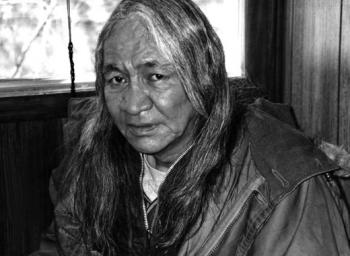 The soft-spoken actor was authentic to the core, tucked into his parents’ dogsled as a baby on their trapline in northeastern Alberta, growing up outdoors hunting moose and snaring rabbits.

Herman arrived in Edmonton in the 1970s. The acting bug may have bitten him when he appeared in a Yellow Pages commercial.

“But all they had him doing was sit on a horse with his long hair, giving directions by pointing his lips,” laughed his brother, Jerry Herman.

Jimmy, the Dene Suline actor from Cold Lake First Nation, kept at it and eventually “made us all proud of him,” said Jerry. It was a humble start to a career marked by a distinguishing role in the Academy Award winning film “Dances with Wolves.”

In the early days, Herman became further involved with performance in his narration work as media assistant at Native Counselling Services of Alberta, where he was hired after completing Native Communications studies at Edmonton’s Grant MacEwan College.

While there, he received the Malcolm Award for his ambition and for inspiring others to succeed.

After playing a small part in “John Cat”, a CBC television pilot program based on a W.P. Kinsella book, Herman decided to pursue acting full time. A year later, in 1990, he got the life-changing call to appear as Sioux warrior Stone Calf in Kevin Costner’s film.

Highlights of his last two decades in film and television programs include a performance in “Reindeer Games”, a cameo role in Clint Eastwood’s “Unforgiven”, as Geronimo in a made-for-cable movie, and on the X-Files.

“He’d call us at home from somewhere in the United States,” said Jerry. “He came home quite often. He’d drive around visiting his old friends, and he wouldn’t talk about Hollywood.

“He liked the bush and he loved his country music.” Jerry has early memories of his big brother coming into the family kitchen from spending the day outside.

“He had one of those old plastic radios and he listened to a country station on it.

“We used to have dances in our community and he’d always get up and sing a few songs.”

A pivotal point in Herman’s young life came with the development of the Cold Lake Air Weapons Range when his parents were no longer able to trap.

“Mom and Dad would be away drinking and Jimmy was the oldest. He felt responsible for us. He’d be trying to find a way to bring home food. It wasn’t easy.”

A harsh stint at residential school took a further toll and Jimmy “found himself at the bottom,” Jerry said. “But one day he said ‘that’s it’ and quit drinking. He had a few slip-ups and then he went for help.”

Having “been there” Jimmy devoted as much time as he could to helping his people, counselling inmates and working with youth on his reserve.

In an interview on CBC television, nephew Adelard Blackman said he once walked a block with him to a coffee shop, but it took an hour because Jimmy stopped and talked to every person he saw on the street.

“He was concerned about people,” said Jerry. “He wanted to help. He went to AA meetings even though he had been sober for 30 years.” He helped many people through the storm of addiction and into recovery with his words of support and calm, soothing voice.

Family was equally as important. When a niece became stranded at Cold Lake he drove 12 hours straight from Edmonton to pick her up and drop her off in Calgary at 4 a.m. so she could get to her job.

“He’d go anywhere and do anything for people,” Jerry said.

The actor’s 10-year stint as Gomba on “North of 60” had a less than promising start. In an interview with Patty Winter on her “North of 60” Web site, Jimmy recalls arriving to audition for the part of Leon, husband to café worker Rosie Deela, only to find it had been cast.

“But they decided to keep me and create a character. They were going to give me the last name “Jumbo”. “Joe Jumbo”. I told them I didn’t want to look like an elephant.

“I was supposed to be on for just a year. I decided to give them my best shot. I think my best shot paid off because I’m still here.”

Fellow North of 60 actor Dakota House, who played Teevee Tenia, looked upon Herman as an uncle or brother.

“At a tough time in my career he helped me. He took time out and gave me encouragement and strong words. He set an example for me.”

Herman married Shirley Goodbrand and the couple raised two daughters, Kayla and Jaclyn, with one granddaughter.

“Jimmy had pneumonia in May and he got better. He was supposed to be on oxygen. His lungs weren’t completely healed,” said Jerry.

In the late evening of Sept. 12, he asked his wife to take him to the hospital and then collapsed from a heart attack. He died Sept.13, 2013.

Whenever niece Shannon M. Houle poked fun at her uncle’s star power, he had a favorite response.

“People would come up to him and ask him for his autograph. We used to laugh because he was just our regular old uncle and it was hard to see him any other way. So I used to say, sarcastically, “Can I have your autographhhhh?

“He’d laugh and swing his hand up, pretending to slap me, and say, ‘Heeere. I’ll give you an autograph.’” He was so silly and smiling away.”