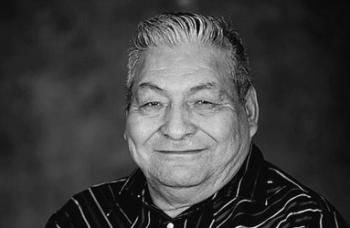 "People, not just our family, went to him when they had a problem. And he’d give you the last dollar he had in his pocket if you needed it.” —Peter Courtoreille
By Dianne Meili
First published 2014

When the long-awaited Elders’ care centre in Fort Chipewyan, Alta., opened in spring of 2014, the Mikisew Cree First Nation planned to dedicate it in the memory of Willie Courtoreille.

The facility’s family room would be named after the long-time band councillor, who talked about his community needing the facility for the past three decades.

Willie was killed in a vehicle accident before he could see his dream come true. He lost his life Dec. 10, 2013 on Highway 63 about 40 kilometres south of Fort McMurray, a route many say should be twinned because so many have lost their lives travelling it.

“My dad was headed to Edmonton on council business, as he did so often, when his truck was hit head on by an armoured vehicle,” said son Peter Courtoreille. “He was always on the go, either for the band or for his family, even though he was 73. I don’t know where he got his energy.”

The driver of the armoured car was also killed, and his passenger was injured.

Peter said it was typical of his dad to want the best for others. In this case for the Elders of Fort Chipewyan to be comfortable and to be able to stay in their own community as they aged.

“He was very dedicated to his family and community,” said Steve Courtoreille, chief of the Mikisew Cree First Nation and Willie’s brother, in an article published in the Northern Journal.

“This centre is the perfect way to honour him. He was very knowledgeable in our traditional knowledge and culture, which lives in our Elders,” Steve said, adding his brother was his mentor and friend, often advising him in leadership matters with wise words.

In earlier years, Willie’s knowledge of the land and water was invaluable to Wood Buffalo National Park’s fire response team. He also worked for Parks Canada giving interpretive tours and revelled in sharing his familiarity of the natural world with visitors.

“He knew which portages were grown in, and which were still open, stuff like that,” explained Peter. Willie grew up on the land at Birch River, about 70 kilometres west of Fort Chipewyan, and trapped for a living as a young man, he added.

“Even after he started working, his free time was spent hunting, hiking and fishing. He was the best trapper in Fort Chip and he wanted to teach that knowledge to all of us. He wanted our family to keep the traditions alive. Even though I work at Shell, I try to honour what he inspired in us.”

Jumbo Fraser, a friend of Willie’s, told Peter an anecdote about his father’s lack of faith in modern inventions.

“They were hunting around Uranium City, west of here quite a ways, and it got a little late. A couple of the guys had a GPS tracking system to find their way home, but Willie said ‘I don’t need that, my GPS is in my head’. Well, sure enough, he pulled back into Fort Chip a good two hours ahead of those other two.”

He told the Northern Journal that one year, a visiting priest issued the students a challenge: the boy or girl who could write “Jesus, Mary and Joseph, pray for us” the most times would win a pure white sled puppy he had been breeding.

“We were all writing in every spare minute we had. We all wanted that puppy,” Poitras recalled.

When it was announced that Willie had won the puppy, disappointment descended on the other students who had been writing their fingers to the bone. But, 40 years later, when Poitras met up with Willie around a camp fire in Wood Buffalo Park, he asked him what it had been like to own the puppy everyone wanted to take home.

Willie’s response startled Poitras. “He said, ‘It didn’t do me any good to win it,’ and so I asked him, ‘How come?’ He said, ‘It died a month after I got it because I cheated. I had two other guys writing for me, too!’”

Despite his childhood deceitfulness, from all accounts, Willie grew up to be an upstanding community member.

“He was an awesome father and he phoned me just about every day. People, not just our family, went to him when they had a problem. And he’d give you the last dollar he had in his pocket if you needed it,” said Peter.

“He was outspoken, but he knew a lot about life in a spiritual way. He was only one person, yet he shared his big heart with everyone.”

An acquaintance from Toronto told a story about Willie at his funeral, attended by about 600 people, demonstrating the band councillor’s intolerance for bullying, according to Peter.

“He said he was in a meeting with my dad when a lawyer hired by the government started to use big words and speak in a condescending way to the Aboriginal people in the room.

Apparently my dad just stared this lawyer in the eyes and then he stood up. That’s all. He just got up from his chair. My dad was not a small man and I guess the lawyer just shut up and never said another word.”