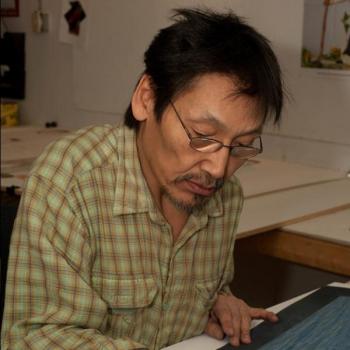 “Pootoogook’s work is very accessible. There’s something very Canadian about it.”
By Dianne Meili
Originally published in 2015

A pencil-crayon drawing on black paper looks stark beside framed scenes of vivid blue lakes and shimmering mountains on the walls of an Oakville, Ont. art gallery.

Yet this simple depiction–a kitchen window revealing flat land beyond–holds its own. The perspective of this studied domestic scene, with its clean, meticulous lines, draws you in and invites you to stand before the window to gaze through it and see what the artist saw.

The work belongs to Itee Pootoogook, a master of drawing, who was mostly ignored in his career except for the few years before his death from cancer on March 18, 2014. From 2010 on, his work caused a “serious feeding frenzy” amongst southern buyers, according to Pat Feheley of Toronto’s Feheley Fine Arts.

His first solo show in 2007 at her gallery sold out on the first day of opening. She can only imagine the heights to which he would have risen had he lived longer.

Like his father, Pootoogook started out carving in the 1970s, but he was restless. Into the 1980s he exchanged art for a career in carpentry, but when the work dried up in 1985 he returned to art, this time choosing to draw.

He was keen to use photographs of his surroundings and depict Inuit life as it was, a world as much about power tools, rifles and snow machines, as was walrus meat, harpoons and igloos, according to a Globe and Mail article.

Unfortunately, Pootoogook’s work—and that of others who had similar ideas about depicting the authentic, modern north—was frowned upon by the then-authenticity-conscious Kingait Studios of Cape Dorset.

“Best to follow the footsteps of the legendary Kenojuak Ashevak, he was told, and her myth-inflected presentations of birds, fish, whales and foxes,” wrote James Adams in the article.

Other Inuit artists like Padlo Pudlat, born in 1916, put cars, buses, steamers and helicopters in several drawings, but it wasn’t until Annie Pootoogook (Itee’s cousin) took first place in 2006 at the Sobey Art Awards that southerners finally got the message about contemporary art in the north. With her portrayals of sexual abuse, drug, and alcohol issues, art buyers accepted the fact there was much more to Inuit artists than walrus and bear carvings.

Finally, the management of the drawing studio in Cape Dorset approved of modernism and accepted anything the artists drew. But it would be years before Itee Pootoogook’s work would be recognized. It wasn’t until 2007 that Feheley included his drawing with the work of other artists in the Toronto International Art Fair.

His star rose a little higher when, in 2008, his lithograph print of a pair of kamiks (Inuit boots) appeared in the famous Cape Dorset print collection.

And then came 2010 when his famous solo exhibition at Feheley Fine Arts caused a commotion amongst southern buyers. They snapped up 49 of the 50 drawings in the show and “people were begging to get into the gallery to see his work”, Feheley recalled. Another smaller solo show in Vancouver the next year, organized by Robert Kardosh, director/curator of the Marion Scott Gallery, proved similarly successful, prompting follow-up solo excursions in 2012 and 2013.

“Pootoogook’s work is very accessible. There’s something very Canadian about it,” said Ellis Quinn in a memorial podcast about Pootoogook on her Eye on the Arctic website.

“It’s true,” agreed Robert Kardosh in the same podcast. “A lot of people can relate to his type of imagery – life lived in a cold climate, fishing and hunting.

“His work was also so good it blew me away,” Kardosh continued. “It was so original and he got better and better at what he was doing, which isn’t the case with all artists. He was a wonderful man and so dedicated to what he was doing.”

Pootoogook’s work schedule was extraordinary. He’d leave his small house at 8:50 a.m. every day to make the 10-minute downhill walk to the drawing and lithography studios. Once there, he would remove his coat and arrange his tools, pencil crayons from the Derwent factory in England, sheets of textured paper, graphite pencils, and photographs. Then he would get to work, drawing with great intensity and focus, always stopping to take his coffee breaks and lunch at precisely the same times, until day’s end at 5 p.m.

If his drawing was still in progress, the studio manager would give him a chit for $100. Once it was finished or near completion – some drawings took almost a week to finish – he would negotiate for his final payment, usually $2,000 to $3,000, minus the total advance chits.

Whatever the amount, Pootoogook would almost invariably do two things before walking home: send a money order to his estranged wife living in Ottawa, with whom he had two sons and a daughter, and he’d buy a bag of groceries.

Early in his career, Pootoogook eked out a living as he bucked the system and made art that pleased him. Every now and then a drawing would sell for $15 or $20 and he made do with that. Wanting to sharpen his skills, he enrolled in the drawing and print-making program at Nunavut Arctic College in 2000 and 2001.

Said William Ritchie, manager of Kinngait Studios since 2009 and long-time champion of Pootoogook, “What really gets me is how, just in the last few years of Itee’s life, after being ignored, he knew he was on to something. These lifelong skills were finally paying off and now they were being taken away from him.”

Pootoogook, who was born in Lake Harbour, N.W.T. (now Kimmirut, Nunavut) was born on Feb. 7, 1951. He was six or seven when his father, Paulassie, moved the family to Cape Dorset on the southern tip of Baffin Island.