Jordan Nolan is a leader on and off the ice 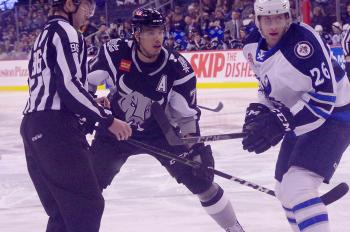 Jordan Nolan of the San Antonio Rampage on Sunday against the Manitoba Moose. Photo by Marjorie Nolan.

"I get to play a little bit more, and you have more responsibility. I think that’s what every player wants.” —Jordan Nolan
By Marjorie Roden

For many professional athletes, being sent back to the farm team is something that would put them off, but this isn’t the case for 29-year-old Jordan Nolan, who now plays for the San Antonio Rampage of the American Hockey League, the farm affiliate of the NHL’s St. Louis Blues.

Nolan is one of two assistant captains with the Rampage this season and he embraces his role as a leader after spending seven years in the NHL.

“At the NHL level, you’re not comfortable, and you’ve got to make sure you come to the work every day, because you never know. It could be your last day in the NHL, and you just have to come and bring it every day.

“Here, it’s a little bit different, where I’m looked upon to be a leader, and I’m more vocal in the dressing room. The players and the coaches kinda look to me to make certain plays and be physical out there, so it’s definitely been a different role, but it’s been fun. I get to play a little bit more, and you have more responsibility. I think that’s what every player wants.”

In junior, Nolan played top line, he told Windspeaker.com. “I played power play and penalty kill in junior, and once you go to the pro level, it changes a little bit because you’re going to play in the NHL as a fourth liner, and that’s what I did for seven years. Now that I’m (in the AHL), you know, I still think I’m a good player, so I am absolutely trying to make the plays and have good games.”

During the off-season, along with his father Ted and his brother Brandon, Jordan stays on the ice and serves as a leader in another capacity.

“My dad has always taught us to be proud of who you are, and always give back to your community, so since we were young we started doing hockey schools and golf tournaments,” Jordan said.

“We recently started the Three Nolans Hockey School, and we go to these smaller communities and we talk to the kids. We teach them things about hockey, about life skills...

“Some kids have questions about their diet, or ‘am I playing video games too much’, or ‘if I want to go to school, what are the things that can help me’? We just kind of try to teach them little life skills like they can’t be up all day playing video games, and you kind of show them that the three of us are from a small First Nations community, and we found a way to make it to the NHL. It takes a lot of hard work, so we try to push those methods onto those young kids.”

The Three Nolans travel to the different communities across Canada.

“We do different schools every summer, so we’ve been out to Enoch near Edmonton, Ochapowace just outside of Regina, and my aunt’s reserve in Fredericton, New Brunswick, St. Mary’s, so we’ve been out to a lot of reserves and met a lot of good people. It’s hard to pick a favourite. It’s kind of like a little vacation almost because I get to spend time with my brother and dad, and the kids are always fun and work hard.”

“I think the kids don’t realize that. They figure if I’m going to be a teacher, it’s probably easier than being a doctor, but it’s still hard work no matter what you decide to do.”