Pipeline Approval: Watershed moment and an act of betrayal 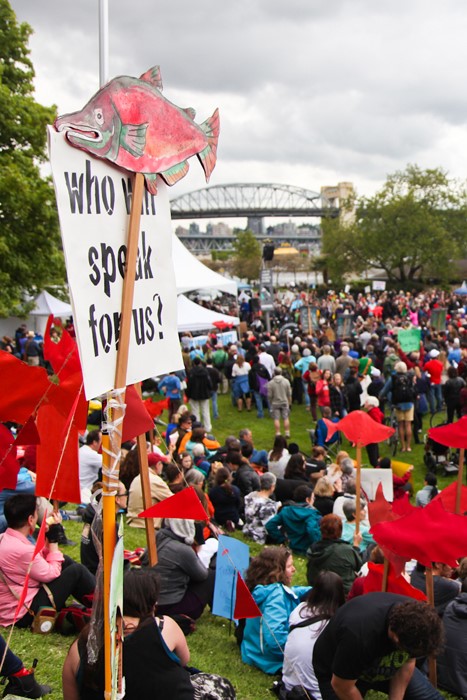 “We are not about to stand down and go quietly into the night. That’s not going to happen,” said Grand Chief Stewart Phillip of the Union of British Columbia Indian Chiefs.

“I think it’s inevitable. People have a right to express themselves,” he said, noting that over 100 First Nations spanning from Quebec to BC have signed a treaty alliance against tar sands expansion.

“We talked today about having a mass action together. Trudeau is uniting the Indigenous people.”

George said Indigenous representatives met with Natural Resources Minister Jim Carr on Monday to present scientific information as to why the Trans Mountain pipeline project was unsafe both for people and the environment. He said six world-renowned scientists wrote the 1,200 page document. He also said the meeting with Carr did not constitute either a protocol document being drawn up, nor consultation. Carr offered no hint to the decision that was to come down on Nov. 29 despite being asked, said George.

George said the meeting was a waste of their time.

“We’re always hopeful, always, but I’m not surprised,” he said.

“I don’t think we can rule out anything. These things have a life of their own and certainly today represents a watershed moment in this battle. It represents another chapter of betrayal on the part of the Canadian government,” said Phillip.

He said that the UBCIC have an online pledge that has attracted 5,000 signatures to date. The pledge commits signatories to do “whatever’s necessary” to stop the Trans Mountain pipeline project.

Phillip said the groups that oppose the project will be discussing all their options, including a “more intense” legal strategy and political strategy.

Phillip accused Trudeau of going back on campaign promises to revamp the Canadian Environmental Assessment and the National Energy Board processes before any major resource development project got the go ahead.

“I’m deeply disappointed but not surprised. We anticipated this decision was going to be made in terms of approving the project despite enormous opposition,” said Phillip.

He said Trudeau had sold out British Columbians interests – noting that the mayors of Burnaby, Victoria and Vancouver all oppose the project – in favour of Albertans.

Phillip said it isn’t good enough that Indigenous people are promised a spot on a committee to oversee the 157 conditions outlined by the NEB before Trans Mountain can go ahead.

He also said that the rejection of the Enbridge’s Northern Gateway pipeline project and the promised legislation for a moratorium on oil tanker traffic off the BC northern coast are not concessions.

“The Enbridge’s Northern Gateway pipeline proposal has been dead in the water now for a very long time. That was no genuine offering or effort to balance. That was a cheap political public relations ploy to suggest there was some sort of balancing in the decision making,” said Phillip.

George said that the rejection of Northern Gateway proves that Indigenous rights are strong.

Trudeau said Northern Gateway was rejected because the Great Bear Rainforest was no place for a pipeline. He said the approvals were made based on scientific proof and not politics and that moving oil by pipeline was safer than moving it by rail.

He also said the pipeline approvals were made possible by the climate leadership plan put in place by Alberta.

Enbridge’s Line 3 is a $7.5 billion replacement and expansion that runs 1,073 kilometres from Hardisty, Alberta, across Saskatchewan adjacent to Regina and through Brandon and Gretna in Manitoba running from Neche, North Dakota to Superior, Wisconsin. NEB has attached 37 binding conditions to the project’s approval.

Kinder Morgan’s $6.8 billion Trans Mountain pipeline will triple the capacity of its northern Alberta-to-Burnaby pipeline system to 895,000 barrels a day.