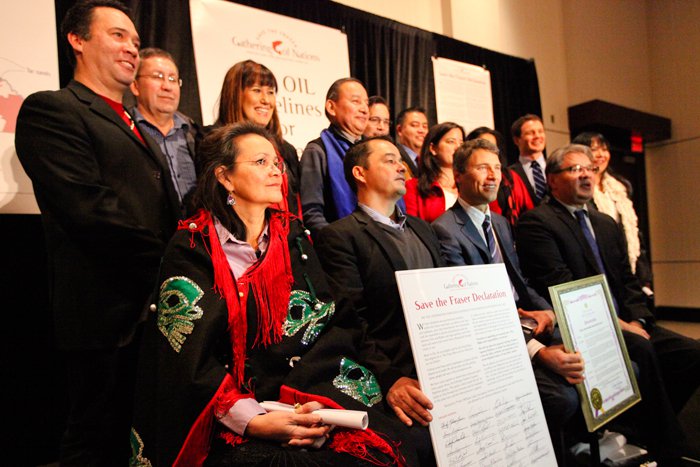 Despite winning the National Energy Board’s support last year, Enbridge Northern Gateway took a hit on April 12 after the town of Kitimat, B.C. voted 58.4 per cent against the controversial project, despite being the job-rich terminus for the pipeline.

A spokeswoman for the Yinka Dene Alliance applauded the referendum results, but said that regardless of the outcome it wouldn’t have changed the minds of the more than 130 First Nations, which signed the alliance’s anti-pipeline Save the Fraser Declaration.

“It was a great victory for many people in B.C. but also across Canada,” said Jasmine Thomas of Saik’uz First Nation. “It’s an expression of the solidarity being shown across this country.

“You can see why they wanted to amp up their media campaign and door-to-door efforts, but we’ve said from Day One that we’ll be there making sure this project never goes through.”

Thomas said the next steps for oilsands pipeline opponents will be to continue invoking Indigenous law as part of their “unbroken wall” of resistance to a project with a high risk of ruptures, spills and tanker accidents.

One day before the plebiscite, Indigenous leaders and land defenders gathered in northern B.C. to reiterate their position that pushing the project through would amount to a violation of their traditional laws, which are based on mutual respect and a relationship with the environment.

“The Save the Fraser Declaration is an expression of our law, but it’s not where our law comes from,” she explained. “We live our law.

“(This) gathering was the start of seeing that happens ... It affirmed for our people that our decision is legally binding. We must ensure that the Enbridge ban is respected and enforced as part of living our law.”

Although largely a symbolic vote by Kitimat residents, which saw roughly three-in-four eligible voters take part, the plebiscite represents “a turning point in the overall campaign” against the pipeline, said Kai Nagata.