Ruth Brass: In her own words 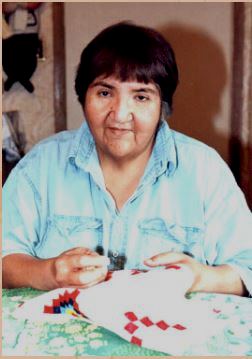 My name is Ruth and I was raised by my grandmother, so I never got to know my parents till I was about 12 when my grandmother died. So I was lucky enough that I grew up in our [Blackfoot] culture and there was some things that I had a chance to do. I met mostly my great uncles and my great grandfather.

And my grandmother used to tell me, said, 'You listen, because someday somebody's going to ask you and I don't want you to make a mistake or add something to it'… 'and the only way you are going to learn is by when a person is talking to you. You have to say 'yes'. But in our language you say 'ah.'

I always had to do this, regardless if I didn't like this or not. I had to listen. So that's what I've been doing all my life, growing up there.

I've seen a lot of things and, I think, like you mentioned today, like today's children, we have a lot of problems with them, because they are living too fast, they're going too fast and they've lost respect of our culture.

And then we have the Elders now, some of them won't waste their time, because they kind of give up on them. But we’re the next generation of Elders. Like me, I try to teach my grandkids and then the other kids that come visit and especially with the foster kids. I had quite a few… I started fostering quite a long time [ago] and 27 kids went through my home….

I think my biggest respect is for our culture and our Elders. I wasn't really that much interested in it after I got married, because, I don't know, I wasn't worried about our culture. Until one day my dad told me, he said, 'Isn't it about time you went back to what you were taught to try and teach other people especially the younger, and tell them…'

I always had different family members going through my home, and some of them stayed with me until they were of age, and I look at them today. And some grew up to be very nice people to be proud of, and I try to teach them the ways that my grandparents or my parents taught me.

But there was something I noticed. That the greatest trouble with the new generation is jealousy. That's the way I look at… and envy. And another thing is that they seem to think they know everything, but as you grow you tend to know you don't know it all. You have to grow and each day you find something else that's new that you didn't know. That, I think, you try to teach it to the younger generations....

I think, basically, the trouble is that we lost our language. Like some of them understand it, but they can't speak it like us. I was fortunate because I was raised and it took me three years to know my English name when I went to boarding school. That's how long it took me just to learn the basic English.

I was taught the old Blackfoot, and today what we use is mostly slang. If you use the old one they look at you strangely because they don't know it. And counting too. We have an old way of counting, and the new ones too they are teaching them in the school.

But I'm glad they're trying, but I think the biggest downfall is the language. If they understand the language, that basically everything will come.

So I had a chance in my lifetime, I was given the honor of looking after very important bundles. It was given to me and I was quite honored. So I'm looking after them and I'm still looking after them today. Not only do I believe in it, but this is what I live every day. I thank our Creator that I'm alive… that's why I never say no to a younger person if he asks me about anything. I like to tell them the truth.

I was lucky, my great grandfather was at the treaty signing. He was 16 years old. And that bundle that I was taking about, he got it then. And he died in '52. So I still have that bundle. So that has never gone out to the museums, like they took most of the Horn Society's and the Old Lady Society's [bundles].

I never thought that they should go to a museum. But there was a period there when people were… they opened the bar for our people. Ten years our people went from… I don't know. I used to tell my dad and he used to tell me 'Be patient. They'll quit.' And I was surprised that they did. And then the younger ones, they seemed to turn around and they wanted everything all at once. And this is what I'm talking about; about too fast and losing some along the way.

And then I noticed today, with our different societies they like to make up things [in ceremonies]… And then I ask for them for forgiveness, because nobody's around to tell them the truth.

We have these people popping up, claiming to know it all, because this is something you do not learn, you have to see, then I think you have to experience it. So I wasn't allowed my first Sundance until I was about seven years old. Before that we were not allowed to go, but now when they try to do the retreats, there is mostly kids there.

So I think that's the time that the older ones should teach the younger ones the respect… But today, it's so awkward… the disbelieving of everything.

They like to think that this is what they are taught, this is the way it goes. It is not so. We have to remember. We're unique. We were put on this earth for a purpose. Not just the other cultures.
I'll give you an example: Like when you phoned me, I went and I did an offering… asked the man upstairs to help me, because you mentioned that you wanted to tape it and I'm not a very… I'm like a loner.

This is part of what we are supposed to do when we belong to the societies. We are not allowed to gamble. We are not allowed to go to those bad places. We have to try and live our lives the best as we know how, what they teach us, because we've got rules. Same as the Ten Commandments. They are similar to that and we have to live by them… These, the societies are supposed to live by [them]…

My dad used to [say] the kids are the future of us. You have to try and guide them. You know what's going to be good for them. Because otherwise, he was talking about our culture, we're going to lose it. And I think that a lot of them are trying to go back to our societies.

I think it's a good thing, but do it right. Do it with your whole heart. You know, not just half. Don't just do it just to show off. It's not right. They never used to do it to show off. They did it because they believed in it.

And this is something that I know a lot of people never did truly believe. They make fun of it. It's not something to make fun of. At least, that's the way I look at it, because I would never…

So I'm glad to have this opportunity [to talk]. I'm thankful to be able to let somebody look at it… These are the things that I want the younger people to know, that you have to take pride in who you are and never mind what anybody says. Because it doesn't matter. Only you can do it…

The kids today, they don't know what it is to play like we played, outside. They don't play outside. They just sit in front of the TV or the computers. But they don't like to go out to explore… Everything has a purpose in life. That's the way we were taught.

We used to go for walks. And here, where I live, there is a lot of sites that are still the same as they were, oh, I'd say a hundred years ago.

And we have a chance to look at them. This is what I tell my grandchildren. 'Look at this. This is what happened.' And they look at it and they ask questions….

To talk about our religion might offend some people, like with us, it's what I believe. There's miracles where it happened, but today we're losing it because none don't put our whole hearts in it.

But I know there's things we're capable to do. And it does exist, because I know, and I've seen lot of things as I was growing up… our medicine men that I have seen. They weren't joking about different things. They had the power.

But today, I don't know why… maybe because people are not… their hearts are not in it. 'Cause you have to believe with your heart…

In our culture, we're supposed to love each other. We all come for the same. We are no different…
Like today's kids, if you sit down and talk with them, some of them like the stories we tell… You keep talking to them. Don't give up. Keep talking to them. You'll be surprised. They're more intelligent than what you think they are.