Long Arms—Elders warn against it 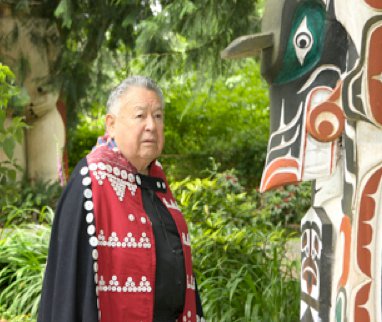 The world has become a small place. With today’s technology—high speed internet, fast cars, planes, and cell phones—people are trading and sharing information more than ever before.

While this shared information creates a greater understanding between people, there is also the danger of getting things mixed up by appropriating another’s cultural and spiritual practices, bringing them home and making them your own.

Thus begins the melding of the distinct nations of the Aboriginal people, the creation of the pan-Indian, the hybrid.

The people we’ve interviewed for this edition of Buffalo Spirit warn against this appropriation. Learn from your own people, use their teachings, find your identity within your own tribal group.

Kim Recalma-Clutesi of the Kwakwa kawkw people of Vancouver Island says the difficulty is unraveling people’s belief systems from what they've learned in text, from ethnographical material, and in the recovery centres that often use sweats, smudging and other spiritual practices of the Plains people to aid in the healing process.

“It's akin to that. It’s that serious. For some reason we are supposed to forget the rules to help people. But in a lot of ways, they said, forgetting the rules is very dangerous, because these things come as part… of supernatural energy."

She said “if we are going to have the discipline to know who we are, we need to have the respect to turn the temperature down in our discussions with each other. To respect each other and to respect those people who actually own the teachings.”

Kim is a caregiver to Chief Adam Dyck who suffered a heart attack recently. He too is concerned about the appropriation of other Aboriginal people’s cultures by his own people.

“What’s happening now with my people is that they’re lost,” said Chief Dyck. “They don't know who they are now. They don't know what kind they belong to. The problem is what we call ‘long arms’.

“You know, they will reach into other people’s boxes and they play with it. And they do lots of that… I seen one of our boys where he has regalia on, everything on and dance like your people (Plains people), wearing all the Indian blankets and everything. They want to dance like your people back there. There was a powwow and he was right in there with his outfit on. That we don’t do…,” he said.

The Elders warned Mary Thomas of Neskonlith about borrowing other people’s spiritual practices.

“My grandmother used to lead the sweat. And this is what I find so different today; what the young people are doing today. They are borrowing from other nations and doing it. And that was something our Elders warned me… You don’t borrow from other people’s spirituality, because you don’t understand it.

“Look at what the Catholic church did to us. We don’t understand that spirituality, and it’s destroyed us. So if you borrow from other nations and try to follow it, it’s not yours. Be very careful,” she cautioned, adding, “respect other people’s belief. Respect what they do. They will respect you for the way you believe.”

Even between closely located and seemingly similar nations, the differences between traditional and spiritual practices can be great. Take the sweatlodge ceremony in southern Alberta where Ruth Brass grew up, was trained and lives.

“Blackfoot women never go into a sweat. Not in our culture. I know that [just miles away] Brocket, Cardston do, but here we don’t. We’re not supposed to, because, I don’t know if you realize what a sweat is… a sweat is a woman’s womb. So when you go in there, that’s why they say you’re purified… So we don’t, but I know in the other cultures they do… As far as I know, in my family, in the society we belong to, no woman has every gone into a sweat. So that’s one of the no-nos. You are not supposed to do. If the older ladies, if they were around, I don’t know what they would think,” Ruth said with a laugh.

Ruth believes that the inter-marriage between the nations also causes confusion in spiritual practices.

“The women that married into ours, the women that marry out, they bring their husbands in and they kind of try to mingle with our culture… I think the only [Blackfoot] societies that have not been invaded are the Prairie Chicken and the Bundle Holders.

“But the Horn Society and the Crazy Dogs have been using different systems from the other cultures.

"It is alright to a limit. Like everybody prays. I have nothing against it, but there are certain things that they’re supposed to do, and it is quite different from the other guy, because they never had, say, like the Prairie Chicken. They don’t have that in a lot of the reserves. I think we’re the only one that have it…”