Buffalo Spirit: Sundance is the ceremony of ceremonies 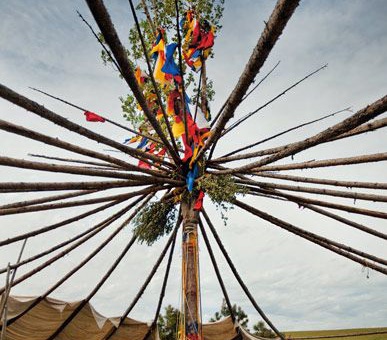 The sound of eagle whistles is heard over the sound of the drum while 63 pairs of eyes are fixed on a poplar tree laden with colourful cloth in the middle of a lodge while the 63 people danced.

The Sundancers are participating in an ancient rite.

This four-day ceremony took place in the northern part of Quebec in Chisasibi, the land of black spruce and tamarack. The House family hosted the Sundance, and Lawrence House was the Sundance Chief, the caretaker of the ceremony.

That’s because the Sundance involves a sacrifice of self to give something to the Creator in order to have prayers answered, House said. While participating in this rite, people fast. That means no food or drink for several days.

“You show reverence, make an offering of the only thing that you have – your body,” said House.

“It’s about giving thanks for the life you’re given or to ask for blessings for certain situations that you may be going through in your life, or your family.”

People attend Sundance for a variety of reasons. One man, a drummer at the Sundance, said the ceremony was where he got help for his drug addiction, and it is the Sundance, and a traditional lifestyle, that has kept him clean for many years.

Nearly 2,000 km west, another Sundance was held, this one hosted by a Dakota community. It’s where Jodi Baker from Wasauksing First Nation, Ont., Sundanced for her first time.

Baker’s enthusiasm is contagious when she talks about what she went through while she danced in the long, hot days in southern Saskatchewan. She laughed and said, “there were some moments that were so emotional.”

“I never really got hungry; just thirsty on the third day.”

She also delighted in the afterglow. When she ate at the feast on the last day of the Sundance, “everything was just so good,” Baker said.

Once the Sundance was all said and done, Baker said there was no feeling to compare it to.

“It was the hardest thing other than childbirth, and it was also the most satisfying and most rewarding thing I’ve ever done.”

Participating in the ceremony can bring about a deep sense of peace. Harry Snowboy is a Cree healer, and he and his wife attended the Sundance in Chisasibi.

Seasoned Sundancers themselves, the couple has been attending as healers over the past seven years.

“Our role is to help support the Sundance Chief and help out in the lodge… and if the dancers need healing, we’re here for that as well,” said Snowboy.

“I also take part in the Buffalo dance,” he said. The Buffalo dance is held on the fourth day. It is, without a doubt, the most emotional part of the Sundance.

Four men in Buffalo regalia and four women carrying buffalo skulls dance around the perimeter of the Sundance lodge, and then enter it. While they are dancing around, people are wailing, sobbing, and placing blue and white ribbons on the horns.

“We believe that buffalos can help the spirits that are lost or stuck, like the souls of people who committed suicide,” said Snowboy.

It’s a powerful dance that helps soothe the hearts of family members who have been left behind when someone commits suicide. Looking around the Sundance in Chisasibi, it seemed nearly all of the Cree there had been touched by that kind of tragedy.

Two women dancers sobbed into each other’s arms, consoling one another on the loss of a common cousin.  Suicide, we know, is an epidemic in some First Nation communities. Suicide rates are five to seven times higher in First Nation and Inuit populations.

Once the Buffalo dance has ended, it’s like the sun is out after a storm. People are smiling again soon after, like a great weight has been lifted from their shoulders.

Sundances held throughout Indian Country are not all the same, and can follow similar, yet different protocols.

For example, in the two Sundances referred to in this story, dancers are required to fast, without food or water for the duration of a dancer’s commitment. In one Sundance, women are not allowed to pierce, in the other, they can. The act of piercing, according to House, “intensifies the sacrifice and it amplifies the prayer.”

In House’s Sundance, another interesting aspect is the Home Fire ceremony. In that ceremony, four men talk about what fire has meant for them in their lives. Once done talking, the men place wood onto a pile of kindling. The pieces of wood the men offer are donated from every family at the ceremony, who collect it from their own homeland.

“Everyone has an experience about fire,” said Snowboy. “Even myself when out hunting. I remember how a fire made me feel after it boiled my tea, cooked my food.”