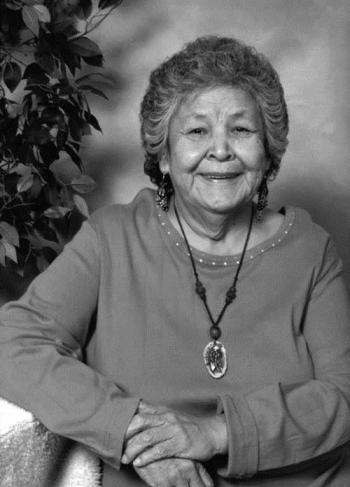 “I will be here in the West doorway, that is where I am today. I am that Thunder in the sky, I am the cleansing when you cry.”

Before her death on Jan. 4, 2011, Lillian Pitawanakwat, Thunderbird Eagle Woman (Ninkii BinessMijissi Kwe) of the Thunderbird clan, wrote out comforting words for those left behind.

Cyndy Vanier, who delivered Lillian’s eulogy, said the Elder gave her notes before she passed away, and “these are probably the things she’d want you to know if she were able to speak them to us today.”

The words reassured loved ones that Lillian thought of death as “just a stepping stone” and that she would never really leave them alone and was only “a breath away.”

“She didn’t want people crying for her because she wasn’t afraid of death and she knew people would carry on with her work, because she’d taught them well,” said Vera Wabegijig, who attended many of the ceremonies Lillian carried out for people.

The Elder devoted her life to renewing Ojibwe traditions and was a fluent speaker of her language.

She was born into the Whitefish River First Nation in Ontario in 1944, and was the last of 12 children born to Moses, of the Potawatomi Nation, and Margaret Pitawanakwat, an Ojibway.

In a biography Lillian wrote several years ago, she stated “I’m the second-last to be delivered by my grandmother, who was the midwife of our community. She delivered many children into the fullness of life and she was the one who greeted me when I came into the world.

”She named me Granddaughter of Thunder Woman. She’s been in the spirit world for a long time. And yet she’s so very present for me, because she is my guide, my teacher. When I ask her things to this day, she answers me.”

Lillian noted her grandmother gave birth to 18 children and “of those 18, only my mother and uncle survived. The others succumbed to the great illness that beset us in the early 1900’s. And so my mother lost all of her siblings except for one.

She carried that grief all her life – the grief of losing a family.”

Lillian’s father’s Potawatomi people were known as the fire-keepers. She took on the task of nurturing the fires of the people she came in contact with.

Her spiritual work took her across the country as she led sweatlodges, fasting ceremonies at Dreamers Rock, and other gatherings for people. Her first concern was women and she worked tirelessly to counsel them and nurture their success.

“I first met her at a youth and Elders gathering at Trent University in Peterborough in 1993,” recalled Wabegijig.

“I was so impressed with what she had to say that I approached her after her talk. I wanted to give her something but all I had was a poem I’d written, so I gave her that.”

Wabegijig said the Elder enveloped her in a huge hug and asked later if she could read the poem at the closing ceremonies.

“I said ‘yes’ and after that, everything changed for me. I knew I wanted to keep writing and produce pieces that would have an impact on my community. Lillian gave me that start. Hearing her read my work that day felt amazing. I’ve never stopped writing poetry since.”

Lillian’s many followers describe her as an intuitive, extremely giving Elder.

“I think she knew very well what she was doing when she asked to read my poem to the audience,” Wabegijig said. “She probably looked ahead and could see my future in the performing arts. I just needed a hand up.”

Lillian shared her traditional knowledge with numerous local, regional and national leaders, guiding them on social and political issues.

She was also a founding member of countless projects, such as Minwaashin Lodge, a facility for Aboriginal women who have been victims of violence or suffering the effects of the residential school system.

As a member of the Elders Council of United Chiefs and Councils of Mnidoo Mnising, she provided valuable teachings related to ceremonies, language and culture, and took the time to write out the teachings of the medicine wheel and create lesson plans about the four directions for youth in grades 7 to 9.

Lillian wanted to ensure young women received traditional teachings and so she oversaw initiation rites for them. In the Strawberry Ceremony, girls are prohibited from eating the berries for a year, and they avoid contact with males except for their father, brothers and cousins.

Also during that year, they are taught how to behave properly, sew, cook and look after their homes. At the end of the ceremony, a feast is given and the young woman is informed of the gifts her family members and friends see in her, and she is repeatedly told that she is loved.

“Lillian had a huge heart, and she was so beautiful and calm. She made a difference in everyone’s life,” said Wabegijig.

“She welcomed you into her home and her life and if you came to know her it was like she was your mother. It was like losing a mother when she died because, suddenly, there was no one to listen to your problems and guide you like she did.”

“She’s also responsible for gifting so many people in the Sudbury, North Bay, Ottawa and Toronto areas – and likely beyond – with their Ojibway names,” Wabegijig added.

She was generous with her time, spirit, and possessed unconditional love for people. That’s why everyone wanted to be with her,” said Cyndy Vanier.

“And everyone remembers her always saying “bon ma pii” which means “love you lots” when she said goodbye to you.”