Shanawdithit: The last of the Beothuk people 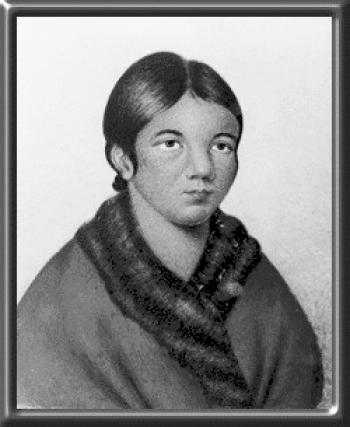 Shanawdithit proved to be a gifted artist. She created patterns and designs by biting birchbark, and carved beautiful combs out of caribou horns. But it was her exceptional talent for drawing that would help her communicate with her English captors.

From the first European incursions in the 1500s on, relations between the Beothuk and the European newcomers were strained, to say the least. By the early 1600s, a trading relationship was formed, but the Beothuk kept their distance, leaving furs for the traders and watching from a distance as their pelts were removed and goods left in their place.

Historic accounts tell of a number of cases where Beothuk people were slaughtered  for no apparent reason other than  because they were "Red Indians", so named for their practice of covering their bodies with a mixture of red ochre and oil, and they were seen as a threat. Some reports even refer to the Beothuk being killed solely for sport.

A number of the European people who had settled in Newfoundland urged the government to take steps to protect the Beothuk, but no action was taken. Then that attitude changed.

Between 1768 and 1823, the colonists took captive a number of Beothuk. The idea was to befriend them, win them over, and then send them back to their people to make a case for developing a peaceful relationship with the settlers.

These attempts to build bridges between the two peoples, of course, failed. The European captors killed any Beothuk that got in the way of the kidnappings, and none of the captives were ever returned to their people.

The last of the Beothuk women captured was Shanawdithit, who came to live in the white world when she and her mother and sister were captured after leaving the interior of the island in search of food. In order to avoid contact with these strangers, the Beothuk abandoned their traditional summer campsites and moved inland where food was scarce.

The women were all sick and starving to death. Within months, Shanawdithit's mother and sister had died from pulmonary tuberculosis.

Shanawdithit survived and was taken into the home of John Peyton Jr. on Exploits Island where she was given the English name Nancy April and served as a member of the household staff.

Historic references to the young Beothuk woman describe her as tall and attractive, with long black hair and perfect white teeth. She was intelligent and lively, with a good sense of humor, and the Peyton children loved her.

Although she worked as part of the household staff, she apparently could—and did—do as she pleased, and often mocked the lady of the house whenever she spoke roughly to the servants.

Though generally in good spirits, Shanawdithit would occasionally grow quiet and disappear into the woods for days at a time to speak with the spirits of her mother and sister. She would be happier on her return, speaking of how her family was with her still.

Shanawdithit proved to be a gifted artist. She created patterns and designs by biting birchbark, and carved beautiful combs out of caribou horns. But it was her exceptional talent for drawing that would help her communicate with her English captors.

In September 1828, she went to live with William Epps Cormack in St. John's. Cormack was the founder of the Boeothick Institution, which he created to try to open lines of communications with the Beothuk people. Cormack had just completed a trek into the island's interior in search of the remaining Beothuk people, without success. But once Shanawdithit came into his home, he set out to learn as much as he could from the young woman.

In addition to information about the Beothuk language, Shanawdithit provided Cormack with information about her people by drawing pictures illustrating the Beothuk way of life. She also drew pictures that demonstrated the demise of her people through loss of traditional territory, violence at the hands of the Europeans, and the introduction of deadly diseases, such as tuberculosis.

The Beothuks, whose numbers were estimated at about 300 in the mid-1700s, had seen their population dwindle to about 72 members by 1811, and by the spring of 1823, when Shanawdithit was captured, only a dozen or so of her people were left.

As she told her stories to Cormack, her eyes would fill with tears. With the European settlements cutting off the Beothuk from access to the coast and their traditional foods of seal, walrus, whale and seabirds, and their numbers too few to hunt, Shanawdithit had little confidence that her people would survive.

At the same time, she did not want to rejoin them, thinking that she would be killed on her return because of her contact with White people, sacrificed to the spirits of those killed by the European settlers.

So Shanawdithit lived in the Cormack household until January 1829 when Cormack left Newfoundland. She then moved to the home of James Simms, the attorney general, but her stay there was a short one.

Shanawdithit had contracted pulmonary tuberculosis years before, and her health had never been good. When she died from the disease on June 6, 1829 in her late twenties, the Beothuk people ceased to exist. An entire nation of people that had populated Newfoundland for thousands of years became extinct.

The rest of Shanawdithit's body is believed to have been buried in St. John's. Years later, a monument in her honor was erected.

In 1997, 170 years after the original Boeothick Institute was created, a new Beothuk Institute was formed to increase public awareness and understanding of the Beothuk people. As part of that mandate, the institute raised funds for the creation of a life-sized bronze sculpture of Shanawdithit, created by Newfoundland artist Gerald Squires.

The bronze image now stands in Boyd's Cove near the remains of a site of one of the largest Beothuk communities found by archeologists to date, a lasting memorial to Shanawdithit, the last of the Beothuk people.