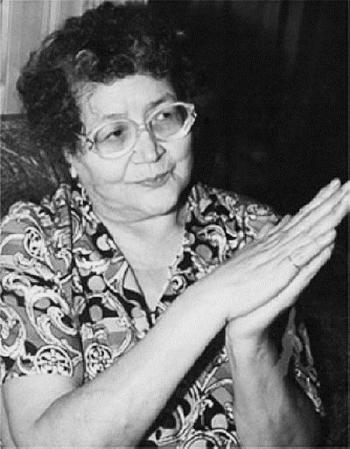 For decades, Rita Joe used her talents to advocate for love and understanding between peoples. That wonderful voice has now been stilled. Joe passed away on March 20, 2007 in a Cape Breton hospital following a long battle with Parkinson’s disease.

Joe overcame a tumultuous childhood, poverty, life in foster homes, prejudice, and years of attendance in residential school, and turned her experiences into a lifelong spiritual quest that would influence thousands who heard her gentle, loving, positive words.

Joe was born in 1932 in Whycocomagh, Cape Breton to Joseph and Annie Bernard. She was the sixth child born to the couple, and her memories of her early years included love and fellowship in a community where all the neighbours were poor, but did all they could to help each other.

Memories of her preschool years were happy, although she missed her older brothers who were attending residential school at Shubenacadie.

Joe’s childhood happiness would not last. Her mother died in childbirth when Joe was five. She was placed in a series of foster homes, some for as little as two weeks, others for a few months. Often these homes were poorer than her own, and the hungry little girl would cry herself to sleep on a mattress on the floor.

When she was nine, she returned home to live with her beloved father, sister Annabel, and brothers Soln, Roddy and Matt. But the family had been reunited for only a year when her father died of pneumonia and she once again found herself in a foster home.

Soon after she was taken to the residential school, a move she welcomed after years of uncertainty in the foster care system.

At the school she was befriended by kindly nuns who taught her to knit, sew, cook and bake; skills she enjoyed. In class, she eagerly finished her work so she could spend time in the library, but not all nuns treated her with kindness, and she found the fierce regimentation of the school difficult.

Not being allowed to speak her Native tongue was another hardship for the young girl. The school became a place of sadness and loneliness for the children who lived there, and when she completed Grade 8 and left the school to go to work in Halifax, she harboured many heartbreaking memories.

The work was hard but Joe enjoyed the freedom of being independent. She made new friends and began to date, but she’d grown up with little opportunity to learn about life and love from her parents. Naively believed the boys she dated when they told her they loved her. She soon found herself pregnant.

She experienced prejudice and harassment on the streets of Halifax, a Native in a non-Native world, and became conscious of her lack of education and the restrictions for advancement that it represented. The next few years were not happy ones as she searched for a better job, a circle of caring friends, and some sort of stability. Soon she moved to Boston where her brother lived, but found the same barriers she had experienced in Halifax.

It was at this time that she met the man she would marry, Frank Joe. He was from Eskasoni, a community near her own home reserve. Living in Eskasoni she once again was surrounded by loving people, although life with Frank could be difficult and there was never enough money.

By the time Joe was in her 30s, she was worn out by years of deprivation, hard work and frequent pregnancies. After the birth of her daughter Anne, Joe’s doctor warned her about the dangers to her health further pregnancies would pose. He told her she must have a hysterectomy.

Remembering her own mother’s premature death and not wanting to put her children through the same experience, she consented. After the surgery her health improved and her family life stabilized.

Looking through the work her children would bring home from school, Joe saw inaccurate history and negative stereotyping of Aboriginal people. Anxious to leave a record of the true accounts, she began to write. Always an avid reader, the words came easily, and she found the experience to be both therapeutic and enjoyable.

Her first poem recognized Eskasoni, featuring its setting among mountains, trees and the rising tide, and the people who lived there. She submitted the poem to a Mi’kmaq newspaper. When it appeared in print, she was hooked.

Soon she was writing a regular column of traditional stories. She interviewed many Elders and retold their tales and relayed information about natural medicines and treatments.

In 1978 her first book, Poems of Rita Joe, was published. She was invited to address school audiences, and as her work became more well-known, the demand for her to share her stories increased.

While she told of heartbreaking stories, she always balanced the negative sentiments with positive thoughts. She scolded non-Aboriginal audiences for not listening to Aboriginal people for the past 500 years and told them now they must begin to listen so that all could live in harmony in this great land.

Joe’s success in the literary world inspired her to return to school, where she completed her Grade 12, followed by a course in business education. Excited by her example, her husband also returned to school, completing bachelor of education and sociology degrees.

The two became closer and their marriage thrived up until Frank’s sudden death from a heart attack in 1989.

Joe’s second book, Songs of Eskasoni, was published in 1988. The book took a more assertive tone, inspiring people to begin referring to Joe as the warrior poet. She threw herself into her writing, and soon a third, then a fourth, and finally a fifth poetry anthology appeared on the shelves of libraries and bookstores everywhere.

In 1996, she published her autobiography, Songs of Rita Joe, which along with a film completed in 1993, allowed Canadians a glimpse into her life. The film, entitled Song of Eskasoni, features Joe speaking in her gentle voice and telling the story of the Mi’kmaq people of Cape Breton Island. The past is gone, she said in the film, and people shouldn’t dwell on it, but should instead look forward to today and to tomorrow, which are in their hands.

Today the Poet Laureate of the Mi’kmaq people lies in peace in the parish cemetery in the land she loved, but her voice lingers on in the printed word for future generations to love and appreciate.

Through her words she is still sharing what is in her heart and those who listen will be all the richer.