Patricia Monture: Mentor and activist led the way on ideas of justice and equality 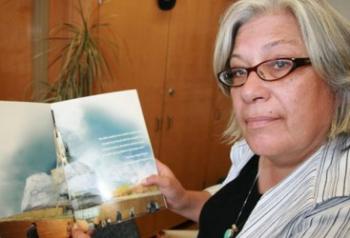 “What I learned long after my law school graduation was that Canadian law is about the oppression of Aboriginal people.”

“A needle points the way, pokes and prods and lets the air out of overstuffed people and things … binding together fabrics and materials of varied textures and sources.”

In a tribute to his colleague and friend Patricia Monture, Terry Wotherspoon, head of the department of Sociology at the University of Saskatchewan, used this metaphor to describe the sharpness of her intellect and profound awareness.

“She led the way on ideas involving Indigenous theory, governance, law, responsibility, and social and political inequality,” said Martin Cannon, University of Toronto assistant sociology professor, in yet another of the public accolades that poured onto the Internet after Monture died at 51 on Nov. 17, 2011 after a period of illness.

Right from the start of her professional career, the lawyer, academic and writer established herself as a significant promoter of Aboriginal sovereignty.

Newly graduated from Queen’s University law school at the age of 29, the young Haudenosaunee woman made headlines in 1988 when she refused to pledge allegiance to the Queen before being called to the bar.

As a member of the Mohawk Nation, a sovereign people, she contended she should not have to swear an oath to a “foreign” monarch.

In the media, Monture insisted she had nothing against the Queen, but found the concept of taking the oath offensive.

“In my culture, we do not distrust people and make them swear to tell the truth,” she is quoted as saying in The Globe and Mail at the time. “My people carry an eagle’s feather to symbolize that they will tell the truth.”

Monture won her case against the Attorney General of Ontario and the Law Society of Upper Canada in 1992 and was called to the bar, though she opted to teach law at Canadian universities instead of practising it. Her knowledge of, and passion for, Aboriginal rights – especially those of women – quickly cemented her authority on contentious subjects.

Monture was never a stranger to controversy, as the offspring of a union between a white bishop’s daughter, Eleanor Townshend, and Mohawk Harold Monture. It was a liaison considered scandalous in 1958 when she was born.

Her young life was further complicated by the death of her mother when she was only six, and the passing of her father when she was nine. Orphaned, she was raised by her stepmother and lost herself in books to combat her loneliness.

“She first wanted to be a writer,” said close friend and fellow lawyer Beverly Jacobs, who relied on Monture’s counsel when she headed up the Native Women’s Association of Canada between 2004 and 2009.

“As a teenager, Trish started rebelling and doing her own thing. She was able to use writing as a tool to resolve hurtful issues in her life as she confronted them and healed later on.”

As a half-white, half-Aboriginal woman, Monture spent her early years struggling with her identity, feeling she didn’t belong in either culture and becoming a somewhat solitary figure on the streets of London, Ont.

She managed to graduate from high school, and enrolled in university after a guidance counsellor told her she wasn’t smart enough to attend. She took economics and sociology classes, surprising herself by getting good grades, and followed up her honours bachelor’s degree in sociology with a law degree from Queen’s, and a master’s degree in law, on full scholarship from Osgoode Hall Law School in 1998.

As Monture learned more and more about law in Canada, she saw how it had been used to disempower and marginalize her people. She wrote about her personal story and the impact of colonization on her people in her book: “Thunder in my Soul: A Mohawk Woman Speaks”, published in 1995, and again in her second book, “Journeying Forward: Dreaming First Nations Independence”, released in 1999.

“What I learned long after my law school graduation was that Canadian law is about the oppression of Aboriginal people,” she wrote.

First teaching law at eastern universities, Monture eventually switched to sociology as a full professor at the University of Saskatchewan in 2004. She specialized in penology, the study of punishment of crime, and Native justice; her contribution to the advancement of women in the university being recognized with a Sarah Shorten Award from the Canadian Association of University Teachers in 2007.

In the last 20 years of her life, Monture was a favoured participant in major inquiries, and on commissions and panels convened on Aboriginal issues, including the pivotal Royal Commission on Aboriginal Peoples of 1993 and 1994. She also served on the Task Force on Administrative Segregation, which examined and made recommendations on the use of solitary confinement in Canadian prisons that house men serving two years or more.

An academic whose resume boasted an exhaustive list of publications, appointments, lectures, and consulting work, Monture was one of the most authoritative and respected voices for criminal justice reformation and equality in the country – for Aboriginal people in particular.

Of all her accolades, she was especially proud of her honourary doctorates from Athabasca and Queen’s universities, which she laughingly said allowed her to be referred to as “doctor, doctor” or “D-squared.”

“She was a true visionary, yet she always had time to help others whenever she could,” said Jacobs. “We both came from the Six Nations Grand River Territory, so we shared a special bond, but I saw she cared about all of her students with passion.” She was an academic, but she was traditional, too, and visited the longhouse back home as often as she could.

“She was also an amazing mother to her children.”