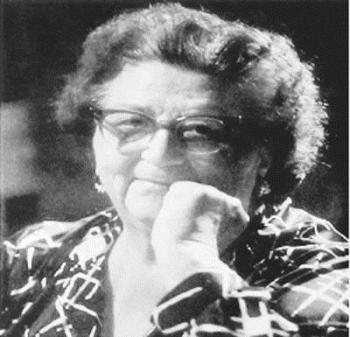 These were the women who lost their Indian status under the law, and the rights and benefits to which this status entitled them, when they married non-Indians.

In 1985, largely because of Two-Axe Earley’s efforts, Parliament passed legislation amending the Indian Act to eliminate the discrimination that penalized Status Indians who were women—while permitting men to marry whom they chose without sanctions—and to provide a reinstatement process. Once reinstated, the women could reclaim their rights under the Act.

On Oct. 4, 1911, she was born Mary Two-Axe, on the Mohawk reserve at Caughnawaga (as it was then called) on Montréal’s South Shore. She spent much of her early life there, but at the age of 10, she was in North Dakota with her mother, an Oneida nurse and teacher. When her mother died caring for students during a Spanish flu epidemic, Two-Axe Earley’s grandfather travelled west by train to bring Mary back to the reserve.

At age 18, she moved to Brooklyn, New York, and a few years later married an Irish-American electrical engineer, Edward Earley. Many Mohawks lived in New York to work in construction, excelling at high-paying jobs as agile ironworkers on the dangerous high beams. The Earleys had two children, Edward and Rosemary.

Marrying a non-Indian meant that Two-Axe Earley lost her Indian status, under provisions of the Indian Act passed in 1876. While the Aboriginal people themselves had not previously regarded women as second-class citizens, the law reflected the Victorian European notion that women were legally the possessions of their husbands.

Losing her status rights meant that Two-Axe Earley could not live on the reserve where she was born, own land there, participate in the band’s political life, vote in its elections, or be buried on the reserve. At the time, all this was of little concern to Two-Axe Earley.

“Who thought about status? We were in love,” she told The Gazette in a 1990 interview.

In 1966, a friend, who had lost her status upon marrying a Mohawk from another reserve, died in Mary’s arms one morning, in Brooklyn. She had been ordered to leave the reserve and to sell her house. While the official cause of death was a heart attack, Two-Axe Earley believed it was the stress from the discrimination she suffered that was actually responsible.

The circumstances of her friend’s death and her resulting anger were likely the major reasons Two-Axe Earley began to organize and campaign for equal rights for First Nations women.

She often faced opposition from male First Nations leaders, who feared that the marriage of Indian women to non-Indians would lead to assimilation and erosion of Aboriginal autonomy. They also argued that the cost of extending Indian status to thousands of deregistered First Nations women and their children would be too high for the bands to bear.

Two-Axe Earley wrote to Senator Thérèse Casgrain, a strong advocate of women’s rights in Quebec, who urged her to submit a brief to the Royal Commission on the Status of Women in Canada, which was established in 1967. Two-Axe Earley then led a deputation before the Commission, “to protest that our rights, our birthright has been taken away.”

In 1969, after her husband died, Two-Axe Earley felt lonely in Brooklyn and moved back to the Kahnawake riverside log house that she had inherited from her grandmother. The band leaders made it clear she was not welcome on the reserve, but a stratagem allowed her to keep the house and live there. She gave it to her daughter, who had regained her status by marrying a Mohawk man. Two-Axe Earley often described herself as “a guest in my own house.”

The Royal Commission on the Status of Women in Canada found “there is a special kind of discrimination under the terms of the Indian Act which can affect Indian women upon marriage.” Its 1970 report recommended that legislation should be enacted to repeal the sections of the Act, which it said discriminated on the basis of sex, and that “Indian women and men should enjoy the same rights and privileges in matters of marriage and property as other Canadians.”

In 1975, while attending an International Women’s Year conference in Mexico, Two-Axe Earley learned that the Kahnawake band council had used the Indian Act to evict her.

“I phoned home and it was about one in the morning and my daughter said—mother we’re debating whether to tell you or not—you have been evicted from home; you have to leave the reserve in 60 days.”

Two-Axe Earley immediately used the conference to tell the world about her plight. After a storm of national and international publicity, the eviction notice was eventually withdrawn.

Another very visible case was that of Sandra Lovelace, a Maliseet from the Tobique Reserve in New Brunswick, who lost her Indian status after marrying an American airman in 1970 and moving with him to California. Her marriage ended a few years later and, upon returning to the reserve, she and her children were denied housing, health care and education.

In 1977, Lovelace appealed to the United Nations Human Rights Committee. When called upon by the UN Human Rights Committee to defend its actions, the Canadian government said that, while it wanted to change the law, its hands were tied because the First Nations community itself could not come to agreement on the issue.

In 1981, after almost four years, the UN Human Rights Committee ruled that Canada had broken the International Covenant on Civil and Political Rights. It was a major, albeit symbolic, victory for many Aboriginal women in Canada.

Subsequently, the 1982 adoption of the Canadian Charter of Rights and Freedoms also greatly assisted the cause, by adding more pressure on the federal government to eliminate the sexual discrimination faced by First Nations women.

Two-Axe Earley’s fierce determination also impressed Quebec’s premier, René Lévesque. When the first ministers at a 1983 constitutional conference refused her request to speak, Lévesque gave her his chair at the table, forcing the other political leaders to listen to her pleas for justice for First Nations women.

“Please search your hearts and minds, follow the dictates of your conscience. Set my sisters free,” she told them.

On June 28, 1985, almost two decades after Mary Two-Axe Earley began her campaign, the Parliament of Canada passed Bill C-31. It amended the Indian Act and brought it into accord with the equality provisions of the Canadian Charter of Rights and Freedoms, which came into effect on April 17 of that year.

Bill C-31 removed the long-standing discrimination endured by First Nations women by restoring Indian status and membership rights to the thousands who had married non-Indians. Two generations of children from those marriages were also given Indian status immediately, which meant they also gained access to federal programs and services and were able to apply for membership in a band.

At the time, the government estimated that more than 16,000 women and 46,000 first-generation descendants were eligible to benefit.

One week later, on July 5, 1985, Two-Axe Earley became the first person in Canada to regain her Indian status when, at a ceremony in Toronto, she was presented with written confirmation by the Minister of Indian Affairs and Northern Development, David Crombie.

“I could find no greater tribute to your long years of work than to let history record that you are the first person to have their rights restored under the new legislation,” the minister said.

Two-Axe Earley, who was 73, responded, “Now I’ll have legal rights again. After all these years, I’ll be legally entitled to live on the reserve, to own property, die and be buried with my own people.”

The 1985 amendments to the Indian Act did not go unchallenged. Some bands refused to reinstate expelled women. Three bands, led by the chief of the wealthy northern Alberta Sawridge Band, went to court to try to quash the guarantee of equality between First Nations men and women.

For Mary Two-Axe Earley, therefore, the fight was not over. In December 1993, then 83, and as a witness for the Native Council of Canada, she rolled her wheelchair into the Federal Court of Canada to testify about the hardships of women expelled from their home reserves.

One of her most striking points was that the Kahnawake reserve had three graveyards: one for Catholics, one for Protestants, and one for dogs. While dogs could be buried on the reserve, “if you were a Mohawk woman who married a non-Indian, you had to be buried outside the community.”

The court concluded that the Canadian government—not First Nations—had the ultimate say in determining band membership.

Mary Two-Axe Earley died of respiratory failure on August 21, 1996, in Kahnawake, at the age of 84. She had been hospitalized since February of that year, after several years of failing health.

About 200 mourners gathered at an old church on the Kahnawake Mohawk Reserve. Two-Axe Earley was described as a pioneer of Canadian feminism and an inspiration to Aboriginal women.

Most significantly, she was buried in the Catholic cemetery that lies on a small hill in the heart of the reserve. That was possible only because of the 1985 legislative changes for which she had fought so many years. Among them was the right to be buried on the Mohawk reserve, her birthplace and what she always regarded as her true home.

The article, which chronicles the efforts and accomplishments of Mary Two-Axe Earley in her battle on behalf of First Nation women, is an abridged version of an article by Wayne Brown that originally appeared in the November 2003 issue of the Elections Canada publication Electoral Insight. The original article can found on the Elections Canada Web site (www.elections.ca).
Adaptation responsibility rests solely with Windspeaker.