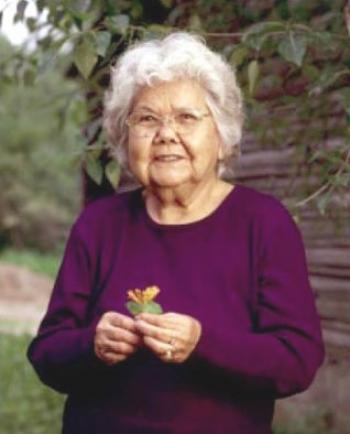 Mary Thomas, a member of the Secwepmec (Shuswap) Nation, was born in Salmon Arm, B.C. Her parents had to work hard to eke out a living, and so Thomas got to spend much time with her grandparents, who helped care for her, and who shared with her and her siblings the traditional knowledge their parents and grandparents had passed on to them.

Some of her fondest memories of her early childhood involved listening as her grandmother regaled her with stories and legends. But the happiness of her childhood changed abruptly when she was forced to leave her home in order to attend residential school.

Thomas’ years in residential school were filled with terrible experiences. She was forbidden from speaking her language or practicing her culture, she was beaten, and she lost one of her sisters, who died while attending the same school. Years later she would recall how the experience severed her from her culture and her spirituality and shattered her self-esteem. When, at the age of 16, she left the school, she no longer had any connection with her Aboriginal identity, and that was just fine with her.

At the age of 19 she married, and she and her new husband moved to the United States. But soon the Second World War began, and the couple moved back to Canada so Thomas’ husband could enlist, just as many other young Aboriginal men chose to do at the time.

Her husband went off to war and, when he returned, he was a changed man. He drank heavily and became abusive. One day, when she felt she couldn’t take another beating, she ran off and hid. That very same day he was killed. He’d been off drinking in town and on the way home had walked onto the railway tracks and was struck by a train. Thomas blamed herself, thinking that if she’d just stayed and taken the beating, he might not have died.

In addition to dealing with the guilt she inflicted upon herself, Thomas also had to deal with the dire financial straights she now found herself in. She was suddenly a single mother, with 15 children and no income coming in.

She struggled along as best she could, eventually moving to Kelowna where she was offered a job. The curator of a local museum was working to put together education kits to be used to teach Aboriginal culture as part of the school curriculum, and enlisted Thomas to assist. Her residential school experiences had stripped Thomas of any knowledge of—and interest in—her culture, but she took the job. It would serve to be a defining moment that would change the course of her life.

With very little knowledge of her own culture, Thomas turned to the Elders to gather the information she needed to do the job. The Elders shared the knowledge that they had, and Thomas absorbed it like a sponge. She didn’t realize it at the time, but her healing journey—her road back to her own Aboriginal identity—had begun. In time, after fully embracing her Aboriginal heritage, Thomas would become not the learner, but the teacher—the Elder others would turn to in their quest for knowledge.

Drawing on knowledge gained through her talks with Elders, and on remembrances from her childhood, when she and her siblings would accompany her parents and grandparents on trips into the woods to harvest traditional plants, she became known as an expert on traditional plants and their uses. She shared this information with others eager to learn, and even worked to help researchers document the environmental changes that occurred in her lifetime and the effect those changes have had on plant life.

Thomas’ work as an environmentalist was coloured by her respect for Mother Nature and her understanding that no more should be taken from the earth than is truly needed, a philosophy she tried to pass on to future generations.

She was concerned about preserving and protecting traditional plants, but she was also concerned about broader environmental issues as well—protection of the air, the earth, the water and the animals. And she recognized that all people, both Aboriginal and non-Aboriginal, must work together to deal with conservation and environmental issues because everyone, regardless of their cultural background, is equally affected by threats to Mother Earth.

Thomas was one of the founders of the Salmon River Watershed Restoration Project, a community-based initiative that is working to stem the environmental damage that has been done to the Salmon River as a result of such things as clear cutting and overgrazing by livestock, and attempting to return it to its former glory. And she worked to establish an ecocultural centre in Salmon Arm, where science, art and Native culture are combined, and special emphasis is placed on reaching out to children.

While preserving the natural environment was important to Thomas, so to was working to preserve another precious resource—Aboriginal youth. Through her own residential school experiences, she recognized how important it was for Aboriginal youth to develop and maintain a connection to their languages and culture in order for them to grow up to be healthy adults.

Thomas was involved in the First Nations/Inuit Child Care Initiative, which helped create new child care spaces where the cultural and traditional values of the children’s communities would be incorporated in the care they received. She also dedicated her time and efforts to a variety of teaching programs designed to promote Aboriginal language and culture. In 2004, her efforts earned her the Medal for Exceptional Contributions to Early Childhood Development from the Centre of Excellence for Early Childhood Development.

Thomas passed away on July 30, 2007 at the age of 90 but, while she is gone, the knowledge she shared, the people she inspired and the work she completed in the time she was here will ensure she will not soon be forgotten.