Mary Richard: Social advocate was not above mopping floors 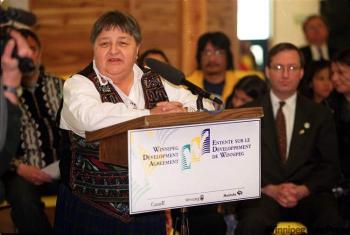 Returning late to the Winnipeg Friendship Centre one evening, Don Marks found his executive director mopping the floor in the bingo hall for an upcoming event.

Marks said his former boss, the late Mary Richard, taught him an important lesson about humility and serving.

There was nobody else around and the job had to get done, she told Marks.

“Mary was an original who always seemed to be thinking and living in a time we would all get to, but five years later.”

“She bought a suit and two pairs of pants, out of her own pocket, for an inmate who just got out of jail when she saw him on the street. At the bus station she saw a teenaged girl crying and she bought her lunch and a ticket to get back home.

“She was so connected to her people, yet she could go toe to toe with mayors and government ministers any time.”

Mary, Akokaochise (Groundhog) of the Mahkwa (Bear) Clan, a hands-on social activist who walked the north Winnipeg streets where the most marginalize of Manitoba hang out, was drawn to serving the voiceless people in the province.

“Mary always said community development is really human resource development,” said Hill. “Back when some women were just getting the Andrew Street Family Centre going, Mary ran a week-long program to show them how to elect each other and how to run their board of directors. They looked at their roles and responsibilities, that kind of thing. The centre was in the poorest constituency in Canada.

With Mary’s early nurturing, the centre has grown. Today (2009) north-enders can take advantage of services ranging from youth programs seven days a week, Headstart for children two to five years of age, a drug strategy program, laundry facilities and a community phone.

Mary was born on June 7, 1940 in Camperville, Man. In a family of 13 children, she emerged as a natural storyteller, always sharing stories about growing up in a traditional Métis community that she lovingly referred to as the Métis Capital of the World.

She loved to describe the old ways of her ancestors, and her vivid descriptions took her listeners back to the time of horse-drawn wagons, berry picking, fishing, fiddling and jigging.

A hair dressing career drew Mary to Winnipeg as a young woman. There, she fell in love with her life-long partner Damas and raised two sons. As her children became independent she worked in the urban Aboriginal community and helped many families.

Throughout her life, she was associated with a long list of service organizations and was recognized with the Order of Manitoba a decade ago.

She also received the Order of the Buffalo Hunt and the YM-YWCA Woman of Distinction Award, among other honors.

In 2000, Mary was at the helm of Thunderbird House in north Winnipeg. Although it was originally intended as a tourist destination, in her capacity as Chief Executive Officer, she had a hand in changing its mission to be a more socially-oriented outreach centre.

“I heard a story that officials wanted to cut some corners when it came to building the place, but she’d have nothing to do with it. She was a strong woman,” said Brian McLeod, co-chair of the facility. “And so confident of who she was and what needed to be done,” added Hill.

When Mary wasn’t attending meetings or working hands-on with people, she showed her lighter side. She loved two-stepping, travelling, opera music, history and was even the co-owner of a restaurant named Bungees at one point in her life.

Mary, who was diabetic, was undergoing a kidney transplant in a city hospital when she passed away on Sept. 9, 2010 at the age of 70.