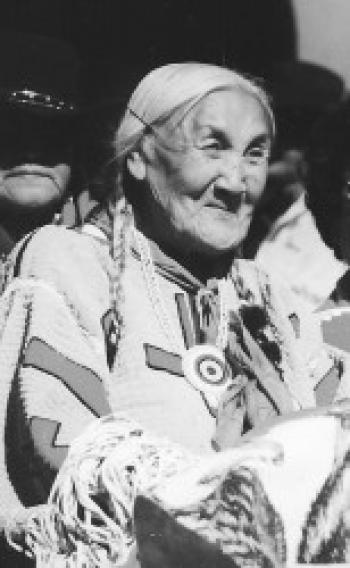 To walk into Maggie Black Kettle’s tipi from the bustling grounds of the Calgary Stampede was to enter the peaceful eye of a pounding, frenetic storm.

The muted light, smell of prairie sage, and lilt of her soft voice–sometimes dipping so low as to sound like a whisper–soothed the senses.

Her stories of a carefree childhood along the banks of the Bow River in southern Alberta could transport you to another time and place, so much so that you didn’t want to return to the rodeo competition or midway crowds.

Black Kettle was honored at the Stampede’s Indian Village closing ceremonies in July 2011. That year marked the final time Niinayiiniimakii “Chief Capturing Woman” would pitch her tipi at the Stampede grounds. She passed away in hospital on Sept. 14 at the age of 94.

Her father, traditional Chief Sitting Eagle, was one of the first to participate in the inaugural Calgary Stampede back in 1912.

The matriarch of the Siksika First Nation, located east of Calgary, was affectionately known as the grandmother of her community.

Black Kettle was a fixture at North American powwows and attended as many as she physically could “to get some exercise and meet friends,” she said when interviewed in 1990 for the book “Those Who Know.”

At that time, she was teaching the Blackfoot language and cultural arts at the Plains Indian Cultural Survival School (PICSS) in Calgary. On the day of the interview she was teaching students to make feathered fancy dance bustles.

After recording some of her memories, she walked in a park close to the school. There she touched a pine-cone on a tree branch and recalled how she made them into dolls when she was a child, with cut gopher-skin rugs for their playhouses.

She confided, though, that her youthful exuberance was dampened by her experience in a Catholic residential school in Cluny, which she entered at age seven. Seeing one of her classmates being punished traumatized her, and made her “a shy and scared kid.”

“I still get scared easily, and if anyone is being hurt by another person I get a sick, cold feeling in my stomach,” she said.

Her disclosure was no small thing since, at the time, the atrocities that occurred in residential schools hadn’t yet received much publicity.

Despite being soft-spoken, Black Kettle’s sense of justice overpowered her timidity. She went on to discuss an incident that occurred when she returned to the school as an adult to work in the kitchen. One of the nuns was treating Maggie’s co-worker, also a grown woman, with obvious disdain.

“She was ignoring this poor woman and so I ran after her when she left to go to the chapel. I told her ‘you always say you’re married to God and helping the poor, but look at what you’re doing to us. Why are you doing this?’ She didn’t say anything, but when she came back, she changed.”

Black Kettle said she could see from a classroom window the tops of tipis pitched in a circle for the annual summer sundance, but was scolded by the nuns for looking at the ‘pagan rituals.’

Shortly after graduating from school at 16, Black Kettle was told she’d been offered to Nickolas Black Kettle in an arranged marriage. After both of her parents passed away, an uncle had assumed responsibility for her and made the proposal.

“It was really frightening,” she once explained to Windspeaker. “When my uncle asked Nickolas if he would accept me as his bride, I was afraid he’d say no.”

But Nickolas said “yes” and the Black Kettles were married. Over the next 10 years the couple worked side-by-side in farmers’ fields and she did a man’s work–even as she had her babies–helping to clear land, drive horses, mend fences and plough fields.

The marriage also helped Maggie regain the culture she lost in boarding school. Her mother-in-law taught her beadwork and, after returning to a ceremonial lifestyle, she was approached to become a member of the Buffalo Women’s Society.

By 1969, she and her family had moved to Calgary. Nickolas passed away in 1973 and so Maggie worked for years in a downtown bus station café until her granddaughter came home from PICSS one day and announced the school principal was looking for an instructor to teach beadwork.

“I thought, `Well, I don’t think they’ll hire me because I don’t even write or have a good education’,” Maggie said. She summoned her courage and applied; she needn’t have worried because she was hired on the spot and remained a cultural instructor at PICSS for many years.

The Elder taught generations to speak Blackfoot, along with traditional arts and dancing, and was recognized with the YWCA’s Woman of Distinction award for arts and culture in 1994.

Black Kettle travelled across North America to participate in sundances, powwows and other gatherings, and noted she was deeply moved by the spiritual leaders she met. Over the years she overcame her shyness to speak at numerous cultural conferences, and became so well known that line-ups to shake her hand were long at almost any event she chose to attend.

She was an ambassador both on and off the reserve, called upon to receive Prince Charles in 1977. Her recognizable face won her roles in movies such as Wild America, Medicine River, and in the TV series North of 60.

Black Kettle’s daughter, Daphne Good Eagle, said her mother was the matriarch of the family, and taught them all the power of prayer and to love each other.

“She had so many adopted grandchildren from the powwow circuit. Adam Beach, the movie star, called her grandma ever since they were in a film together,” Good Eagle said.

“She devoted her life to renewing Blackfoot traditions.”