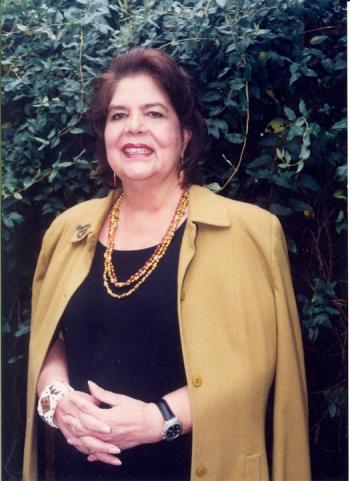 “The Cherokee Nation will be the laughingstock of all the tribes if we elect a woman.”

Wilma Mankiller distinctly recalled a male delegate standing up at a campaign meeting to warn her about the consequences of her bid to become deputy chief in 1983. Not to be discouraged, her knowledge of the strong role of Cherokee women in her people’s history helped her stand up to widespread opposition.

Not only did she win the election, but after serving her four-year term as deputy principal chief, a term she considered to be her governmental summit, she went on to serve as principal chief in 1987, the first woman to hold that position. She was re-elected again in 1991.

Her once-doubtful detractors could not deny the positive change she brought to their communities and the heartfelt concern she demonstrated for their welfare.

“By the time I left office in 1995, after not seeking a fourth four-year term of office, there were fewer questions about whether or not women should be in leadership positions in the Cherokee Nation,” Mankiller wrote in her autobiographical book Everyday is a Good Day.

“Cherokee people are more concerned about competency, about whether the Head Start bus shows up on time or whether they are properly diagnosed at the health clinics, than whether a woman is leading the nation. My elections were a step forward for women and a step into the Cherokee tradition of balance between men and women.”

Before stepping into office, Mankiller came to national attention as a community expert with media coverage of the Bell Waterline Project in the early 1980s. Mankiller, and her second husband Charlie Soap, led 100 poverty-stricken Bell, Oklahoma residents, who were ready to abandon their community, in building a 16-mile pipeline to bring clean water into their homes.

After eight months of trenching and blasting rock, local men and women completed the waterline and their success sparked a movement of similar projects across the Cherokee nation.

Growing up poor in the 50s and 60s in Oklahoma, Mankiller saw her Cherokee people as self-reliant. She remembered how family and neighbors depended on one another for support and survival, often trading goods–eggs for milk or farm goods for store-bought goods–to get by.

After her father moved the family to California seeking a better life, she was in the thick of the civil rights and women’s movements, and the massive anti-war demonstrations in San Francisco sparked her interest in social justice issues.

Native American issues consumed her after she joined a group of university students occupying Alcatraz Island in 1969 to attract attention to issues affecting their tribes.

Shortly after, she began working in pre-school and adult education programs in the Pit River Tribe of California. Chafing under her first husband Hector Hugo Olaya’s paternalistic values, and realizing her own people were fighting for a better life, she returned to her ancestral lands outside of Tahlequah, Oklahoma with her two daughters in 1976. By that time she had gained knowledge of land and treaty rights, and grant-writing skills. Along with her rock-solid faith in the ability of the Cherokee people to solve their own problems, she worked hard to develop community-based programs.

“My first job with the Cherokee Nation began in October of 1977 … and people did not quite know what to make of me,” wrote Mankiller in Everyday is a Good Day.

“I cheerfully worked longer hours than most anyone, and I would do whatever it took to get something done. My secretary would often find me sitting on the floor of my office trying to collate a grant proposal while my colleagues were worrying about the state of their bouffant hairdos.

Once elected as chief of the second largest tribe in the United States with a current enrolled population of more than 140,000, Mankiller fell back, once more, on traditional knowledge and spirituality for her leadership style.

During her tenure, she and Navajo Nation President Peterson Zah co-chaired a national conference between tribal leaders and cabinet members helping to establish an Office of Indian Justice within the U.S. Department of Justice.

Free-standing health clinics, an $11 million Job Corps Centre, and expanded children and youth services were also attributed to her office.

Mankiller’s terms as chief were not without controversy. She established the law that limited tribal membership by excluding the Freedmen section of Cherokee Indians, ruled unconstitutional in 2006 by the Cherokee Supreme Court.

Her administration was also involved in many conflicts with the United Keetoowah Band of Cherokee Indians, the other federally-recognized Cherokee tribe headquartered in Tahlequah, Oklahoma.

After her last term as chief, Mankiller took a teaching position at Dartmouth College, lecturing, and authoring several books. Her first book, Mankiller: A Chief and Her People, became a national bestseller and in 2004 she released her co-authored Every Day Is a Good Day: Reflections by Contemporary Indigenous Women.

She was awarded the Presidential Medal of Freedom by President Clinton, the highest civilian award in the U.S., and inducted into the National Women’s Hall of Fame.
In 1979, she was involved in a near fatal car accident which required 17 surgeries. She had multiple other health problems including myasthenia gravis, a kidney transplant, breast cancer, and lymphoma.

In March, at age 64, she was reported to be seriously ill with pancreatic cancer and died of the disease at her home in rural Adair County, Oklahoma on April 6, 2010.