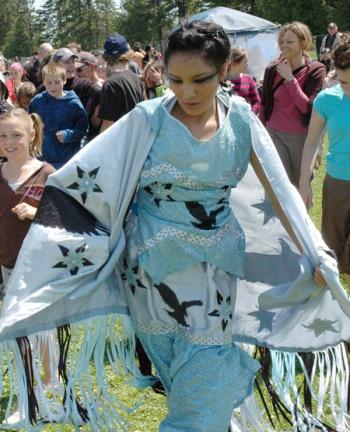 Shannen Koostachin threw a small pebble in a big pond that caused ripples that reverberated across the country.But the stone had barely left her hand when, shockingly, she was killed in a motor vehicle accident on an Ontario highway.

At only 15, the Mushkego Innanu James Bay Cree from Attawapiskat First Nation garnered national attention when she confronted federal minister of Indian Affairs Chuck Strahl on the steps of Parliament to demand a new school for her community.

Though he had excused himself from the meeting with her earlier, Shannen caught up with him outside and—looking him straight in the eye—told him that even though he had broken an earlier government promise to build a new school, she and her community weren’t going to give up.

She didn’t, and the school project campaign she led resulted in the government finally agreeing to her request in December 2009.

“Chuck Strahl is six-foot-four, imposing, and one of the strongest men in the country, politically,” commented Stan Loutitt, grand chief of the Mushkegowuk Council of tribes in northern Ontario. “But it brought tears to my eyes when Shannen saw his oak-panelled, chandelier-lit office and then told him, point blank, ‘one day I dream that my brothers and sisters can go to a school as nice as this’.”

“I thought to myself ‘Would I have thought to say those exact words to his face when I was younger?’ No. I wouldn’t have. She taught me something that day about being spontaneous and from-the-heart … never mind all the briefings and caucusing we go through.

“Shannen knew she was speaking up not only for her community, but for lots of other Aboriginal kids across Canada who don’t have equity in education.”

According to Timmins-James Bay MP Charlie Angus, “Shannen didn’t want to be an activist, but she emerged as a spirited young woman willing to stand up and fight for her community.”

He became close to Shannen when she lived with his family for a year. The two often travelled together while visiting Ontario schools, participating in a letter-writing campaign on behalf of the Attawapiskat school project.

Angus marvelled at how confident Shannen became with each speech she gave and how she spoke “truth to power.”

“She could move journalists to tears,” he said. “But then, she could be a classic teenager in the next moment, too, sitting in my van and telling me, no, she didn’t have her homework finished or, yeah, she would get around to cleaning up her room.”

It was Shannen’s older sister Serena who first became involved with the new school project. She and many students before her attended classes in drafty, substandard portable classrooms after the community’s original school was closed in 2000 because it occupied land contaminated by a diesel spill.

After Selena left the community to seek further education at a secondary school, Shannen took over from her.

Videos of her speaking of having to wear her coat in class because the school rooms were so cold, and seeing mice scramble over the lunches students brought from home were posted on Youtube, and, along with a Facebook campaign, drew support from thousands of youth from across Canada.

“We are denied basic educational rights,” she told the crowd at a 2008 student-led forum called Education is a Human Right, held in Toronto. The conference drew students of all cultures into the struggle for better conditions in First Nation communities.

Shannen explained to delegates, “We have children in Attawapiskat who have never been in a real school. It’s hard to get excited about coming to a temporary school that’s unsafe and uncomfortable. Some students are giving up as early as grades four and five. They just stop going to school. They have no hopes.”

Though Shannen would deny being a heavyweight leader, Chief Loutitt believes her father prepared her well to play an important role in bringing change to her community.

“She comes from a large, strong, cohesive family deeply rooted in Cree culture and the land,” he observed. “Her father Andrew has carried on the beliefs and customs of our people and passed them on to his children.

Impressed by Shannen’s speech at a rally during the 2008 National Aboriginal Day of Action, Cindy Blackstock, executive director of the First Nations Child and Family Caring Society of Canada, saw in the young woman a leader who could represent the rights of children across Canada.

“She wanted her brothers and sisters to have it better than she did, and she was willing to put herself out there. She put a face to the problems in her remote community. All of us remain committed to continue what she started, to push for equitable funding so all children can realize their potential. We’re pushing for safe and comfy schools, as Shannon would say, for all children as a basic right.”

Blackstock helped head up an application to have Shannen awarded an International Peace Prize by the Nobel Laureate.

“She was one of only 45 kids in the world to be nominated when she’d just turned 14. She didn’t win, but a day of remembrance was shared by a group of international experts regarding the peace prize; they knew her work well.”

Aside from adult praise, Shannen’s peers also recognized her as someone special. Jocelyn Lazarus, who grew up playing with Shannen, remembers her always smiling and acting kindly toward other kids.

“When we all heard about our school being closed down, Shannen thought it might be possible to get a new one so she just went for it. I thank her so much because she got what she wanted, finally. My cousin made a new page on Facebook called ‘become a fan if you think the new school should be named after Shannen’. Seriously, I think it should be named in her memory.”

Shannen died when the minivan she was riding in on May 31 south of Tamagami, Ont. collided with a transport truck. She and the 56-year-old driver of the vehicle were killed, while two other passengers in the minivan sustained minor injuries. The driver of the truck was uninjured.

Blackstock expressed her hope readers would, in Shannen’s honor, write to the Prime Minister at pm@pm.gc.ca calling on him to ensure First Nations children across Canada have safe schools and equitable education.

“Shannen never gave up and neither should any of us,” she urged.