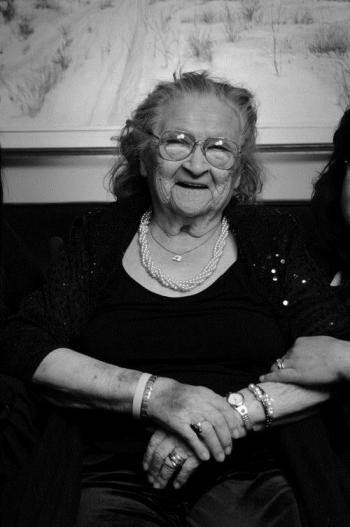 Even when Jenny Flett delivered a 16-pound boy, who she said “looked like a little bear”, the delivery went smoothly.

The northern Alberta midwife delivered 487 babies in her lifetime. Generations of parents relied on Flett to bring their children into the world, and she never let them down.

“She always said what she did was a ‘labor of love,’ with an emphasis on the `love’,” said her daughter Trudi Ann Plamondon. “She took time with mothers because she wanted them to be relaxed. She said it’s because most doctors today are in such a rush with their patients that mothers feel stressed out and then they have a hard time.

“She didn’t get paid for delivering babies, but that never bothered her. Instead, toward the end, she only wanted people to know how hard the conditions were back in the early days when she started delivering babies,” Plamondon noted.

A lack of roads, indoor plumbing and electricity and she never lost a single mother or child.

“If you asked her about actual challenges in all the births she went to, she’d pretty much tell you it was bad weather and traveling in the wintertime that gave her the most problems,” Plamondon said.

Whether in a trapper’s cabin or a tipi, Flett delivered them all. Her only tools were a weigh scale, clean sheets, clamps and two pie tins, which she warmed on a wood stove to help with delivery of the placenta.
Flett’s mother was a midwife, but she made her daughter wait outside the birthing room to fetch the things she needed.

“Husbands weren’t even allowed in the room in those days,” Plamondon said.

When Flett finally took over her mother’s profession, she was largely self-taught and had learned about the human body, and healing it, through a mail-order book called the Doctor’s Medical Manual.

“I remember that doctor’s book,” recalled Plamondon. “I remember playing with it. I liked it because it had all kinds of pictures. Mom always told me to be careful with it and I thought it was just an old book. I didn’t know it was her medical bible.”

Flett was born Ellen Elizabeth Fraser in 1908, the daughter of a Scots merchant from the Orkney Islands and a Métis mother. She said her father always seemed grumpy, but later came to understand he was always too busy making a living to show his children much affection.

When she lost her mother at 14, as the oldest child she began looking after her 10 siblings, including a 10-month-old brother who knew her as his mother. Her lifetime of looking after others began then.
Jenny married Edward Flett in 1927 and together they had 10 children. But they also adopted six more children in the community, and Jenny was known as “mom” to almost everyone in northeastern Alberta.

Finally retiring from her career of helping others at the age of 75, Flett eventually moved from Fort Chipewyan to a seniors’ home in Fort McMurray, but the family helped keep her ties to the land and traditional food in tact by roasting a large Canada Goose every year on her birthday, and completing the meal with low-bush cranberry sauce and stuffing.

Flett never failed to save some of the wild meat to take to her next door neighbour at the lodge.
“She was always thinking of others,” said Plamondon. “And she was a typical Elder who was always telling you things with a gentle reminder.”

And sometimes the reminder was a little vociferous.

“She hated people wearing hats in the house. My son had a nice clean white cap on his head at one of her birthday parties and she told him to ‘get that dirty thing off your head.’ In her time people wore hats and sweated in them... she thought it was disrespectful to wear one inside.”

At an awards ceremony in Fort McMurray, Flett was a special guest speaker who addressed a theatre full of people. She answered question after question from the captivated audience about her long life.

What did she recommend for labor pains? Strong, black coffee served cup after cup.

And had she ever delivered twins? Twice. And they were very easy.

Flett received a lifetime achievement award during the 2003 Regional Recognition Awards, and when she was 100 years old, she was awarded a nursing diploma from Keyano College’s Fort Chipewyan campus.

When she turned 101, Flett was credited as being the oldest Métis woman in northeastern Alberta. She passed away on March 2 at the age of 101.